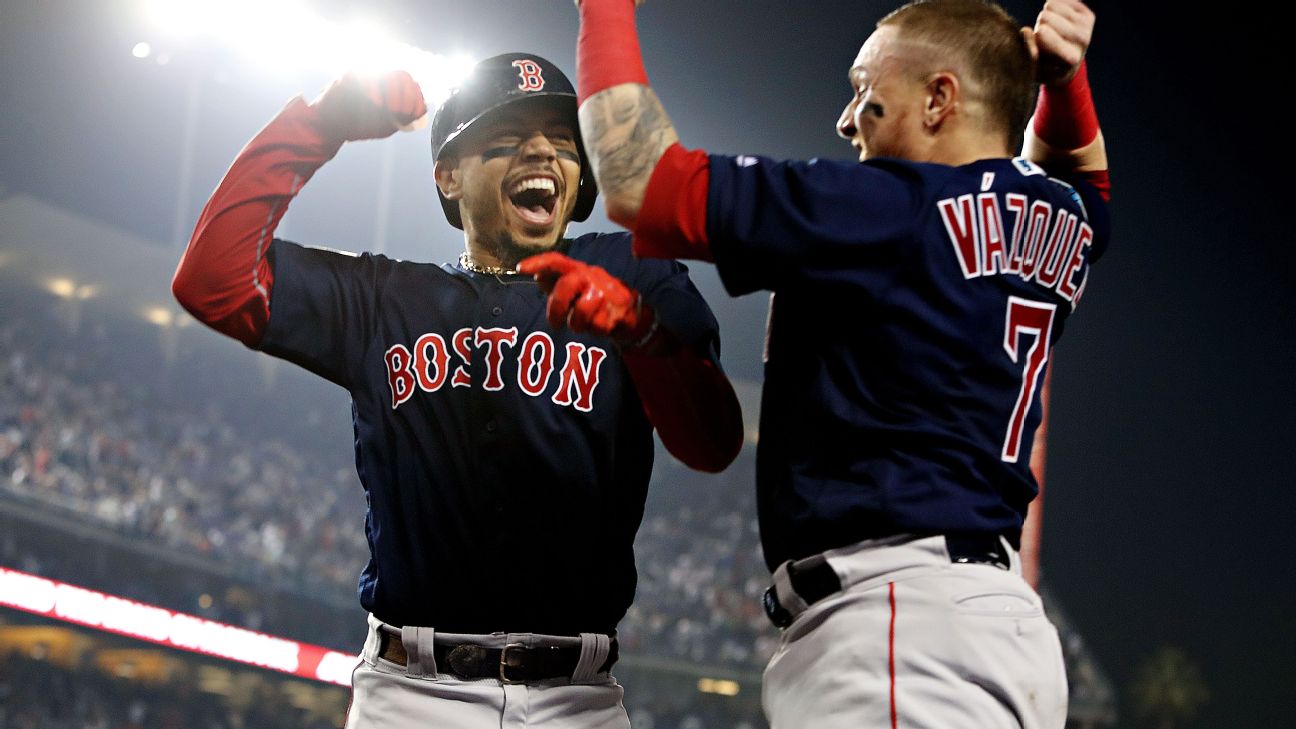 LOS ANGELES -- What in the name of Ted Williams has happened to the Boston Red Sox? The franchise that was cursed for more than eight decades has once again staked its claim as the premier franchise in baseball.

Boston put the wraps on a dominating season with a 5-1 win over the Los Angeles Dodgers on Sunday in Game 5 of the World Series. The Red Sox secured their first title since 2013 -- a blink of the eye on the Boston-baseball time scale -- and fourth in 15 years. Boston has now won nine titles in franchise history, tied for third-most of all big league teams.

The Red Sox beat teams in every possible way this season, and in the clincher, Boston used the long ball to finish the Dodgers for good. Steve Pearce hit a two-run homer in the first inning off Clayton Kershawand added a solo shot in the eighth off Pedro Baez. Mookie Betts and J.D. Martinez added solo shots in the sixth and seventh.

The homers were more than enough in back of a lights-out David Price, who rewrote his postseason narrative once and for all. Price dazzled the Dodgers for seven innings for his third win this postseason.

The 2018 Red Sox have stated a pretty solid case as being the best team in franchise history. Their 108 wins set a team record. Their plus-229 run differential matched the 1949 Red Sox, who didn't win a title, for the second-best in team history. The record, plus-255, was set by the 1912 Red Sox team that won 105 games and beat the New York Giants in seven games (plus a tie) in the World Series.

But what really sets the Red Sox apart is their dominance of the rest of the field in this year's playoffs. This was a loaded bracket, with the American League in particular being more top-heavy with power teams than any circuit in recent memory. The National League was more egalitarian, but the Dodgers featured as much talent as any AL team and had the pedigree of six straight division titles working for them.

Despite all of this, the Red Sox plowed through three opponents -- the hated Yankees, the defending-champion Astros and the mighty Dodgers -- who combined to win 295 games during the regular season. The final series totals -- 3-1, 4-1 and 4-1 -- almost read like a peak-Pete Sampras score from a Wimbledon final.

The Red Sox did in the postseason what they had been doing all year: They mashed at the plate and caught the ball in the field. Boston combined the power and patience of a three-true-outcomes (home run/strikeout/walk) team with the situational excellence of a traditional sequential offense. The most stark evidence of this was Boston's two-out production, which accounted for 45 of its 84 runs during October.

By winning their fourth crown in 15 years, the Red Sox have put themselves in a select group of dynastic clubs. There have been 24 World Series champs who won a fourth title over a 15-year period. Many of those teams were repeaters, groups that accomplished the feat more than once with the same core set of players. When you break it down into team eras, the club looks a lot more exclusive:

That's the full membership roster of this exclusive club, and it wasn't hard to define each team-era combination by the presence of an all-time great player. With these Red Sox, as notated by that question mark, that's not so easy.

With Dustin Pedroia out with a knee injury, shortstop Xander Bogaertsis the only player on Boston's World Series roster who also played in the 2013 Fall Classic. (Reliever Brandon Workman, who pitched for the 2013 champs, was left off this year's Series roster.) In 2013, the only players still around from 2007 were Jon Lester, Pedroia, Jacoby Ellsbury and David Ortiz.

Heck, even in 2007, there were only four players who appeared in that World Series and also appeared in the curse-breaking 2004 season: Ortiz, Manny Ramirez, Mike Timlin and Jason Varitek. Ortiz is the only one to collect three of those four rings.

The lead executive for the first two titles was Theo Epstein. In 2013, it was Ben Cherington. In 2018, it's Dave Dombrowski. The manager for the first two teams was Terry Francona. The 2013 title-winning skipper was John Farrell. This time, it's charismatic, first-year manager Alex Cora.

Different players. Different executives. Different managers. But it's one organization and four championships. The common threads are the city of Boston, Fenway Park, sabermetric pioneer Bill James and, the individual in the background of all of this, owner John Henry.

It's the presence of Henry that as much as anything ensures the Red Sox's place among baseball's elite is fixed for the foreseeable future. With a fan base and market that should enable big payrolls, Henry has leveraged Fenway into the cash cow it ought to be and spent on players accordingly. The Red Sox have baseball's highest payroll this season, and that certainly doesn't hurt. But under Henry, the Red Sox have combined the efficiency of smart management with the might of immense financial clout.

The end result: the first Red Sox dynasty in a hundred years. It's the 21st century version of a dynasty, born out over a number of years, but in an era of an expanded playoff format, this is as close as we're likely to get to the days of Casey Stengel's New York Yankees.

Henry will continue to stay in the background while Boston celebrates with yet another parade this week. Dombrowski, who walks the ramps after games from his box down to the team offices below, fans shouting encouragement as he passes conspicuously through them, has his second title as a lead exec. He'll get his due, and he should.

Dombrowski certainly put his stamp on the title club, acquiring Chris Sale, Price and Craig Kimbrel, among others, and replacing the retired Ortiz with J.D. Martinez. He also hired an unproven manager in Cora, who won over players, Boston fans and the media alike during one of the greatest first years ever for a big league skipper. In doing so, he became the first Puerto Rican-born manager to pilot his club to a title and the first rookie skipper to do it since Arizona's Bob Brenly in 2001.

But it will be the Red Sox's dynamic, mostly young group of players who will receive most of the adulation, and they've earned it. Mookie Betts will likely be the AL MVP, Sale would have won the Cy Young if not for some second-half-injury trouble and Martinez won the AL's Hank Aaron Award for his run at the Triple Crown. The Red Sox have Gold Glove candidates all over the field.

Despite all of these attributes, the Red Sox snuck up on us. They weren't a consensus pick to win it all before the season, and really weren't one even after winning all those regular-season games. They didn't generate the buzz of the 2016 Cubs or last year's Dodgers and Astros. Some of that is surely due to the personalities in the Boston clubhouse. Grinders. Professionals. A complete lack of attention-seekers.

A perfect example of this was Game 4, when Boston overcame a four-run deficit with nine straight runs. The charge was led by journeyman Pearce, a 35-year-old, career platoon player who has toiled mostly in obscurity for seven big league clubs. Pearce hit a game-tying home run off Dodgers relief ace Kenley Jansen and a bases-clearing double in the ninth, collecting four RBIs in the biggest game of his career.

So what did Pearce do after the game, with masses of reporters, writers and camera operators looming outside the Red Sox's dugout? He caught the first bus back to the hotel to rest up for Game 5. You'll have to forgive Pearce for not coming out and break-dancing for the media after his big night, since he came out and hit a two-run homer in the first inning off Kershaw on Sunday to get the Sox clincher off and running.

Like those 2016 Cubs and 2017 Astros, the Red Sox are bursting with talented players in their prime and seem poised to dominate for years to come. If that happens, it won't be any surprise because that's what dynasties do -- dynastic things.

With a fourth title in 15 years and the perhaps greatest season in club history, that's what the Red Sox have become. So call forth John F. Fitzgerald and the ghosts of the other Royal Rooters and cue up "Tessie." Because for the first time since the days of those hallowed gentlemen, the Red Sox have risen to what they once were.

Pearce earns MVP after fantastic Game 4, 5 performances
Steve Pearce is awarded the World Series MVP award after his clutch performances in both Game 4 and Game 5, becoming only the 3rd first baseman to earn the honors.

Pearce: This is the dream
Steve Pearce talks with the Baseball Tonight crew about growing up as a Red Sox fan and how he was so successful in this World Series.