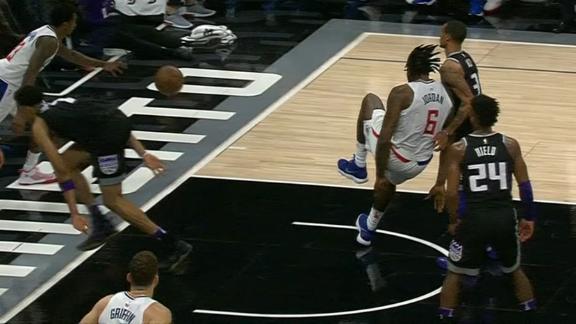 LA Clippers center DeAndre Jordan rolled his left ankle near the end of the first half of Thursday night's 121-115 road win over the Sacramento Kings and did not return.

Jordan, who had eight points and seven rebounds in 11 minutes of action, was injured after dunking off a lob pass and landed awkwardly in the lane.

Jordan is the last player on the Clippers who has appeared in every game.

"It's tough. You just keep dropping guys every game,'' Clippers coach Doc Rivers said after the game. "Every game someone is stepping in for us, too, and that's the blessing.''

The other four opening-night starters (Blake Griffin, Danilo Gallinari, Milos Teodosic and Patrick Beverley) have all missed significant time so far this season due to injury.

"That's par for the course for our team this year,'' Griffin said. "One guy comes back, one guy has to go out.''

Rivers said Jordan wanted to come back in the game after spraining his ankle but the team kept him out. Jordan tweeted afterward a GIF with the message "I'm good actually," but there was no further word on his prognosis afterward.

Griffin shot 5 of 14 and was 2 for 7 from beyond the arc in his return from a concussion he suffered last Saturday.

"Fine head-wise and all that,'' he said. "I just felt like I was a little off rhythm-wise.''