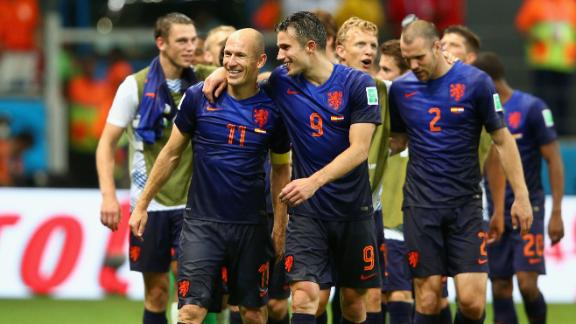 Spain coach Vicente del Bosque admitted to feeling physically sick by the nature of his side's 5-1 thrashing at the hands of the Netherlands.

In a replay of the 2010 final, Del Bosque's side went ahead thanks to a 26th-minute penalty before conceding five times without response as the superb Robin van Persie and Arjen Robben scored twice each.

Stefan de Vrij was responsible for the third goal as the Dutch ran riot over FIFA's top-ranked team.

Switzerland upset the eventual winners in the opening game four years ago but the manner of this humbling could be harder to bounce back from.

"I feel sick, ill at ease, but with the courage a defeat must not sink us," Del Bosque said. "It is not a happy moment, but first of all I want to congratulate the Dutch team, who were superior to us. We have been overwhelmed in the second half.

"We are a team of good professionals and good lads, everyone hurts, so there was no accusatory glances and that's good for the team. There will be time to talk."

Xavi was making his 134th appearance for the European champions and called it "the hardest loss of my career."

"It was a terrible match, a debacle," Xavi said. "We did everything wrong."

Del Bosque declined to zero in on the performance of Iker Casillas, who was to blame for two of the Netherlands' goals in a shaky performance.

"I insist that it is not the time to blame," Del Bosque said. "The defeats do not come through the performance of a player, but by the weakness of the team. We cannot blame anyone, least of all Iker."

The Netherlands may not now surrender top spot in the group, but Del Bosque still wants to see a big response from the Spaniards in their second Group B clash against Chile.

"It's sport, we lost. It is necessary to accept defeat," he said. "We must recognise our mistakes, but everyone fought for a better result.

"I am aware that it is a very delicate time for us. Together we have to try to solve it for the next match against Chile and look for the win."

Del Bosque also suggested that David Silva's missed chance moments before the Dutch equalised -- the Manchester City went for an audacious chipped finish but was denied -- was a pivotal moment.

"They played better in the second half, but we dominated in the first and went from possibly 2-0 with Silva to 1-1 immediately," he said.