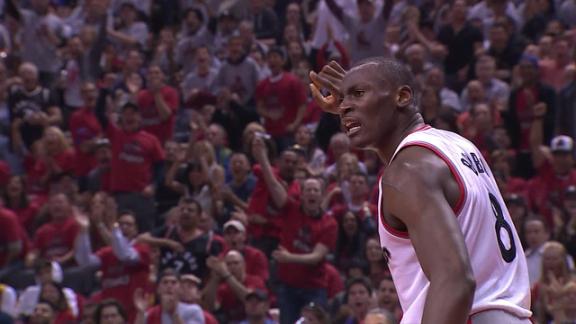 Toronto Raptors center Bismack Biyombo may not have gotten permission from Dikembe Mutombo to use the retired shot-blocking star's finger-wag celebration, but Mutombo says Biyombo "really doesn't need it."

"You can copy something you like," Mutombo told ESPN.com on Tuesday night. "Bismack is my youngest brother. I have nothing to be mad at him for. I'm so proud of him. We're from the same country [Congo], and I call and text him every day to congratulate him because I'm so proud of him."

Biyombo, 23, had said he received permission from Mutombo to use the finger wag, but Mutombo told TMZ, "I don't know when that conversation took place. Him and I need to talk this summer."

On Wednesday, Biyombo told TSN that Mutombo needs to stop talking to the media about the subject because it's becoming a distraction.

"Let me tell you, wherever you are, you've got to stop that media bulls---," Biyombo told TSN of his message to Mutombo. "I know you've got my cellphone, you can text me anytime and we have been texting. Me personally, I find it a distraction and you know that, as a player, as a big brother. You know I still love you, but let the media do the media and don't try to get in on what the media is trying to do."

Biyombo had told ESPN's production crew and others earlier in the Eastern Conference finals, "After I had a conversation with Mutombo, I just felt like he has been great to my country. ... And I thought it was a better way to keep his legacy going. I love Mutombo like a big brother. I've had several conversations with him and Hakeem Olajuwon. But it's also getting caught in the moment and finding a way to get the fans involved and my teammates as well, and flowing with the energy of the game."

Mutombo, who retired in 2009, was a four-time NBA Defensive Player of the Year and led the league in blocks three times during his 18-year career.

"He claims in the newspaper and everywhere he said I gave [permission] to him," Mutombo told TMZ. "I said, Did I [give it]? Was it family? Was it a cosign? But you know what, he's a young man, [so] I let him enjoy the fame. He's making me famous. I will see him in the Congo this summer, so him and I will talk back home with nobody around us."

Biyombo, who has thrived in a starting role in place of the injured Jonas Valanciunas, is averaging 1.4 blocks per game during the playoffs.

Mutombo and Biyombo first met after Biyombo was selected No. 7 overall in the 2011 draft by theSacramento Kings. Hisrights were traded to Charlotte, where he struggled to get acclimated to the NBA for four seasons. He has found his footing this season in Toronto.

Mutombo says he sees Biyombo every summer in Congo, where they conduct basketball clinics for young children in their native country.