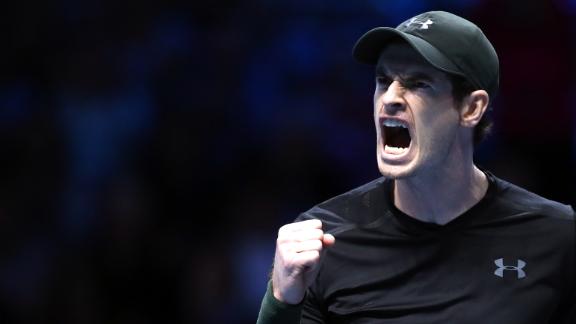 LONDON -- Everything is falling into place for Novak Djokovic at the World Tour Finals, which will make a welcome change, given some of his tribulations the past six months.

On Thursday, we will be spared a potential second-round clash between the Serb and Gael Monfils, who withdrew from the Tour Finals because of a rib injury he picked up last month in Stockholm.

Monfils' rope-a-dope tactics infuriated those inside Arthur Ashe Stadium and beguiled Djokovic in their US Open semifinal clash just a couple months ago. No one is probably happier to see Monfils exit the tournament than Djokovic, who won that match in four difficult sets.

"You know, you work so hard for this moment, then [to] not be able [to] play your best is a huge deception for me," Monfils said in a news conference Wednesday. "To not be able to finish it, I attempted to play in two matches. I have a couple of stuff I wanted to show. I'm disappointed."

One man's loss is another's gain, though, and now alternate David Goffin's trip to London won't be as just a tourist.

There will be pride on the line in Thursday's afternoon session. Like all the original members of Group Ivan Lendl, Goffin has never beaten Djokovic. His losing streak stands at four, including a semifinal loss earlier this year in Miami.

With a 2-0 record this week, Djokovic is already guaranteed a place in the semifinals as the group winner; little else will be at stake when the Belgian takes on the world No. 2.

It is another boost for the 12-time Grand Slam champion, who is seeking a fifth consecutive title here and sixth overall. A championship would guarantee him the year-end No. 1 ranking for the fifth time in six years. Last Monday,Andy Murray ended Djokovic's 122-week reign at the top.

Unlike Murray, who faces a tough battle against Stan Wawrinkaon Friday to potentially secure his place in the last four, Djokovic can put his feet up with an extra day's rest.

It could mean another trip to one of London's green spots with his family.

"Well, Hyde Park is one of the nicest parks there is in this city," Djokovic said of a venture outside earlier this week. "Because of its vastness, I guess you have so many different contents: the lake, nature, different amusement for adults and for children. My son is here. Obviously, I try to dedicate my time daily to him, at least in the morning.

"We take a stride. We play with the ducks and swans, ball, playground. It keeps me relaxed. It keeps me grounded as well. I get to spend time with my family and him, quality time. It's very important."

Djokovic just needs to better Murray this week, which has become a more conceivable prospect as the week has progressed. The Scot might be on a 21-match win streak (including four titles), but he faces a nightmare run of three matches in three days, should he make it to the final.

Playing a 3-hour, 20-minute marathon against Kei Nishikorion Wednesday did not help his cause. Murray needed an ice bath after that grueling, three-set win.

Although Djokovic doesn't have much on the line Thursday, Milos Raonic and Dominic Thiem will compete in a straight shootout in the evening session, with the winner awarded second place -- and the coveted semifinal spot -- in the group.

"He's playing well," Raonic said of the 23-year-old Austrian. "He's been doing stuff well throughout this whole year. Just like myself, he played extremely well at the beginning of the year. Hasn't necessarily played his best tennis since.

"Fortunately for me, I hope it works out that way. This is one of my best surfaces. I don't know if indoor hard courts is necessarily his. So hopefully I can take time away from him and play on my terms and have him react to the things I put forward and try to push him around."

As the home stretch of this year's ATP World Tour Finals approaches, the players are feeling the building pressure to win or go home. Everyone except Djokovic, that is.