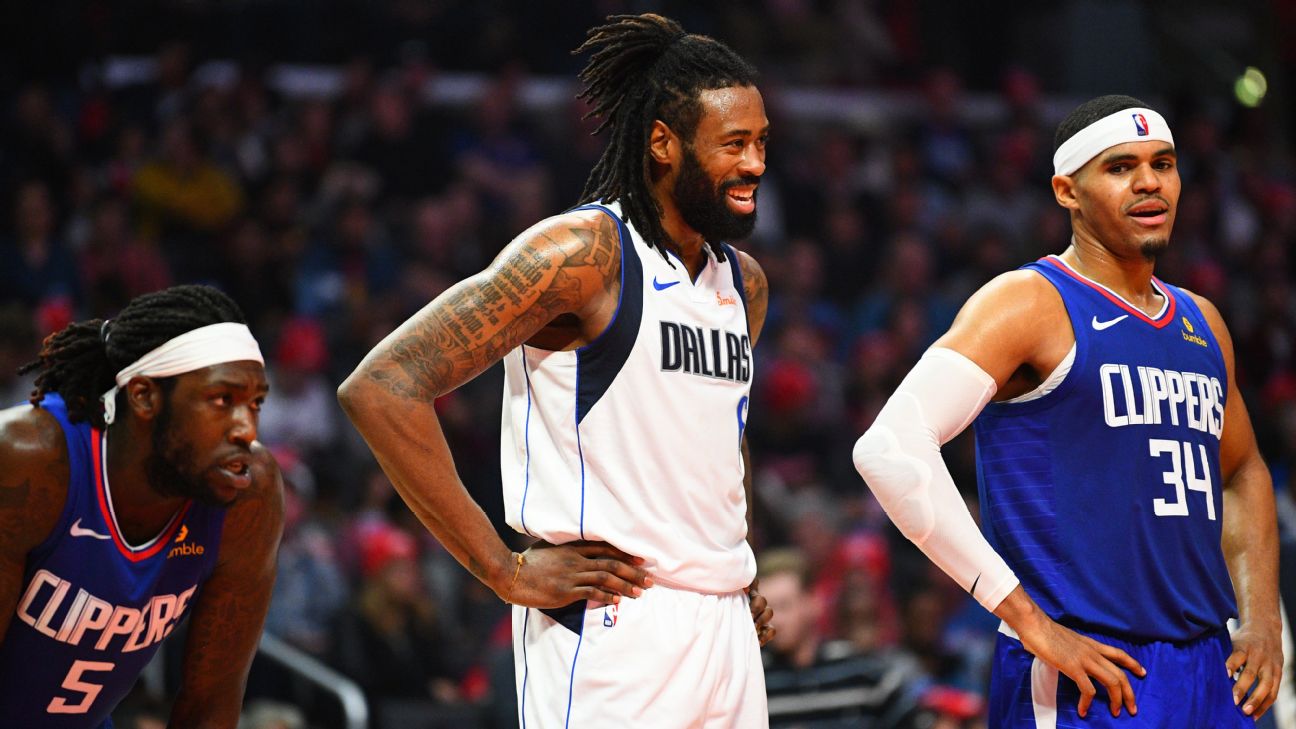 LOS ANGELES -- On a night that Dallas Mavericks center DeAndre Jordan was welcomed back and honored by his former team at Staples Center, Clippers coach Doc Rivers said he hoped to see Jordan's LA jersey retired when all is said and done.

"When you think of [Jordan] more than anybody, you think LA Clipper," Rivers said before the Clippers hosted the Mavs on Thursday night. "I think DJ, in my opinion, will qualify [to have his Clippers jersey retired] when he's done, for sure."

Jordan faced off against the Clippers at Staples Center for the first time since departing for Dallas in free agency last summer.

Jordan, who flourished under Rivers during their five seasons together in Los Angeles, said he was touched by Rivers' remark.

"It's really humbling," Jordan said. "There's no secret Doc is my favorite. I love Doc. He's a big reason for a lot of the success I've had in this league, and I appreciate him a lot. For him to say something like that, it's super cool."

Jordan scored 11 points on 4-for-6 shooting and collected a game-high 22 rebounds in a 125-121 loss. He missed morning shootaround because of illness but rallied to make the start.

"He was active, even though he was obviously under the weather," Nowitzki said. "But there was no way he was going to miss this game."

The Clippers presented a brief video tribute to Jordan during a timeout in the first quarter. At its conclusion, the Clippers' public address announcer introduced Jordan, who was received warmly with a standing ovation from the crowd as well as the Clippers' bench.

Jordan stood up from the Mavericks' bench, waved several times to the fans and returned their applause with claps of his own.

"I thought it was great," Jordan said. "I really appreciate those guys doing that. It was cool."

Jordan was a mainstay for the Clippers for 10 years. Drafted out of Texas A&M in the second round of the 2008 NBA draft, Jordan entered the league as a project regarded as a limited offensive player. He ultimately started 638 games in the Clippers' frontcourt, including 360 consecutive games between 2011 and 2016 -- at its conclusion, the longest active streak in the NBA.

Over time, Jordan developed into a capable offensive player, albeit one with limited range away from the basket. He is the NBA's all-time leader in field goal percentage at 67.1 percent and led the league in field goal percentage for five consecutive seasons. He topped 70 percent for three straight seasons between 2014 and 2017, when he was selected for the NBA All-Star Game. He was named to the All-NBA third team three times.

But Jordan's most substantial contributions in Los Angeles came on the defensive end. He embraced the challenge put forth by Rivers to become the one of the league's most dominant player. He earned first-team All-NBA Defensive honors in 2014-15 and 2015-16, and twice led the league in rebounds.

Jordan came close to leaving the Clippers for Dallas in 2015, initially pledging to sign with the Mavericks at the start of the free agency moratorium period. But days later, Clippers teammates, Rivers and owner Steve Ballmer staged an intervention at Jordan's home in Houston, not leaving his home until Jordan signed a new four-year, $87 million contract with the team. The episode, now part of NBA digital lore, was chronicled in real time on social media.

"It was a weird thing, but I think it was far weirder on the outside of the room than on the inside of the room," Rivers said Thursday night as he recollected the scene.

Three summers later, Jordan went through with his departure for Dallas, as he declined his $24.1 million player option to remain with the Clippers and signed a one-year contract with the Mavericks for approximately the same amount. This season, he's averaging 11 points and 13.8 rebounds in 31.2 minutes per game.

After Thursday's game, Jordan signed his game-worn jersey for a former teammate, young Clippers big man Montrezl Harrell, with whom he forged a tight friendship during their one season together in Los Angeles.