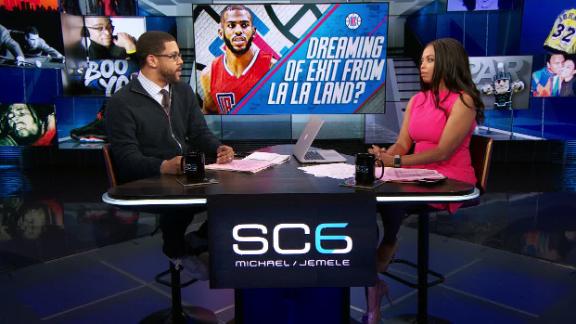 PLAYA VISTA, Calif. -- TheLos Angeles Clippersand coach Doc Rivers are settling in for what could be a wild offseason.

After another disappointing playoff exit -- this time a first-round loss to Utah in seven games -- the Clippers have a lot of work to do.

Will the Clippers blow up the core of the team and rebuild? Will the Big Three of Chris Paul,Blake Griffinand DeAndre Jordan be broken up, with Griffin and Paul set to become free agents?

"I don't know. I think they deserve a chance to win. They have built this legacy. I do believe that," Rivers said Wednesday. "... There's a big part of me that believes [in them]. These guys are responsible for the birth of our franchise in a lot of ways. They consider themselves Clippers. ... I would love them to shepherd that through.

"Whether that happens or not, it's too early to make all those decisions or they'll make them for us. But I do have a strong belief in that."

JJ Redickalso is a free agent, and Luc Mbah a Moute has an option.

The Clippers have yet to make the Western Conference finals. The inability to beat the Jazz provided evidence for Rivers heading into free agency.

"We need length," Rivers said. "We need more length and two-way players. Again, that's easy to say. Little harder to do with the way our contracts are. We may continue to do what we've done or we may decide to change our contracts and have more flexibility."

There is much work to be done, and it could be an offseason of much change.

"I'm really looking forward to it," Rivers said. "I'm a driven human being. I can tell you I do this for one reason and that is to be the winner. I decided a while ago I no longer want to be in the party; I want to be the party. Like I tell my players, when you set yourself up that way, you're going to have a ton of disappointment. I told them that four years ago. Unfortunately, so far I've been right. It's the only way to go, as far as I'm concerned."

Griffin suffered a toe injury in Game 3 of the playoffs and had surgery this week.

Griffin is a free agent with an early termination option. Asked if he thinks he'll opt out, Rivers said: "I guess. I don't know. I have no assumption."

Rivers is president and coach of the Clippers and there is speculation over whether he'll keep his duties in the front office. There's no uncertainty on his part over whether his dual roles work based on the help he gets from the front-office staff.

"It is hard. That's why I hired Lawrence [Frank]," Rivers said. "People don't realize Pop [Gregg Popovich] has been the president [in San Antonio] a long time. Clearly, it can be done, but you've got to have great help. [General manager] R.C. Buford and that entire staff does. Pop really coaches the team. He's involved.

"That's the same system we're at. I hear that it's hard to do both. I'm doing the same thing. We've hired a million people. Half of them, I'm still learning their names. Lawrence is running the team in that way, but I'm still the president. I really believe more now that it's a good way of doing it."