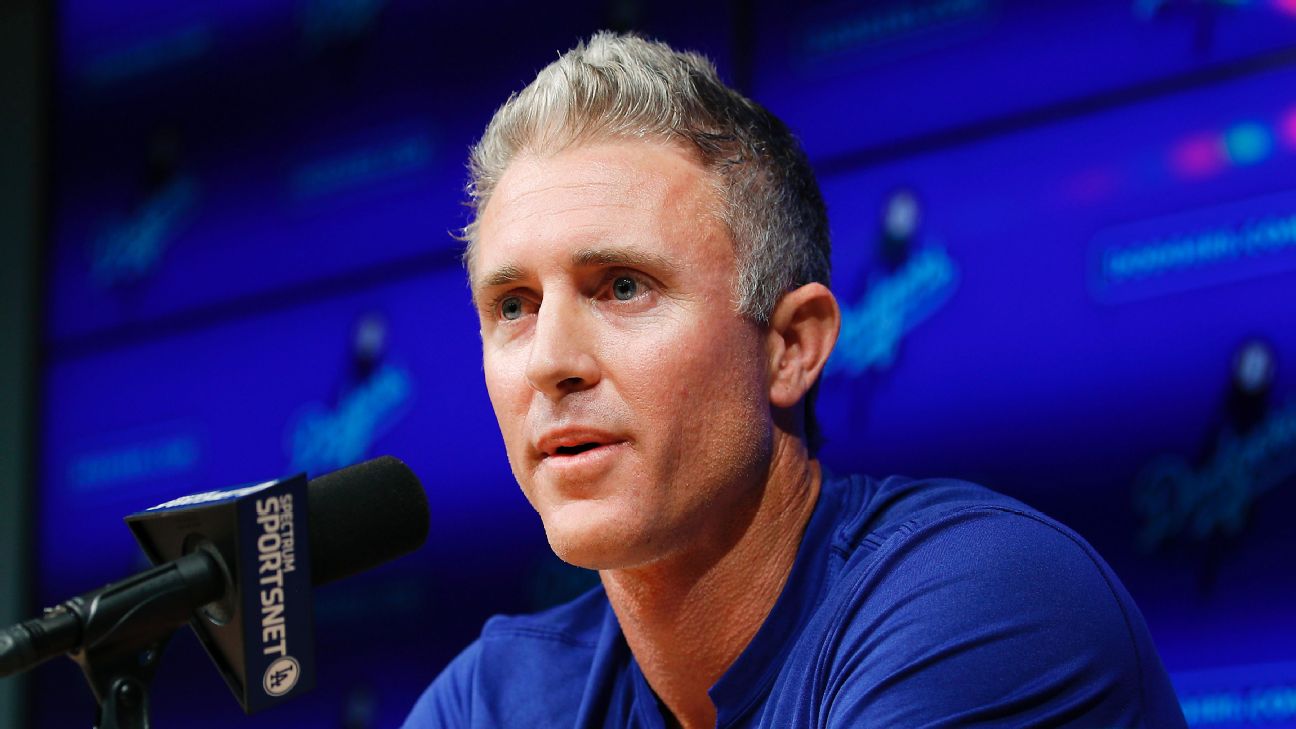 LOS ANGELES -- Chase Utley will retire from baseball at the end of this season, capping off a 16-year career that included a World Series championship with thePhiladelphia Philliesand an elder-statesman role with the Dodgers.

Utley, 39, announced his decision at a jammed news conference in the basement of Dodger Stadium on Friday, with several of his teammates surprising him by crowding into the small, steamy room.

Utley has tried to avoid the kind of attention he received Friday for most of his career. He always has preferred to let his play on the field speak for him, although among his teammates he is generous with his knowledge of the game. They in turn marvel at his physical condition.

Hernandez also posted a tribute to Utley on Instagram.

The 2019 season would have been the final year of a two-year, $2 million contract for Utley.

"I'm no spring chicken. My hair is going gray. There's a lot of things letting me know it's time,'' Utley said.

The second baseman made his name with the Phillies, earning five All-Star berths and winning four Silver Slugger awards. He helped the team to a World Series title in 2008, combining with shortstop Jimmy Rollins as a standout double-play duo.

The Phillies traded Utley to the Dodgers in August 2015, bringing him back to his roots. He was born in nearby Pasadena and played at Long Beach Polytechnic High School and UCLA.

The move west forced him to transition into a role he described as a "part-time player.''

"I'm also a part-time strength coach, a part-time pitching coach, occasionally a part-time catching coach, as well as a part-time general manager,'' Utley said. "But the thing I'm having the most difficult time with is being a part-time dad. That's really the reason I'm shutting it down, because I'm ready to be a full-time dad.''

Utley said he has yet to tell his sons, 6-year-old Ben and 3-year-old Max.

"They've asked me a few times, 'Dad, how much longer are you going to play? Why do you have to go to the field today?''' Utley said. "That conversation will come soon. I think it will be a good conversation.''

In 2015, Utley broke the leg ofMetsshortstop Ruben Tejada with a hard slide into second base in Game 2 of the National League Division Series. Utley was suspended for Games 3 and 4 of the series.

"They announce his name and the camera stayed on his face for like two minutes and there were 50,000 people booing from the bottom of their hearts and he didn't even flinch,'' Hernandez said. "Obviously, they had a good reason for it, but that was pretty awesome and shows you who he is.''

Utley has been influential in the clubhouse with the Dodgers' young roster. But his role has been reduced from starter in 2016 to platoon player last year to part-time starter and pinch hitter this season.

"Probably the most well-respected guy in our clubhouse, just the way he treats people, his career, how consistent he's been,'' Roberts said.

Utley has started 30 of 58 games this season, hitting .231 with one homer and 14 RBIs going into Friday night's game against theLos Angeles Angels.

He had contemplated over the past few years about how he wanted to retire: announce it at the start of a season or go with his preference to "ride off into the sunset.''

"The more I thought about it, the more I realized that I didn't think it was fair,'' he said. "It wasn't fair for the people that had helped me become the player and person that I am today. Getting this out of the way now, getting this off my chest, I'll be at ease a little bit more.''

Utley will surely be feted when the Dodgers visit the Phillies from July 23 to 25. Shane Victorino and Jayson Werth, his former teammates from the 2008 championship team, also recently announced their retirements.

Utley said the upcoming trip to Philadelphia played into the timing of his announcement.

"I've had so much support over the years,'' he said, singling out Phillies fans as "amazing.''

Angels All-Star Mike Trout grew up in New Jersey and cheered Utley and the 2008 Phillies.

"It's pretty remarkable how he kept the same swing for so long,'' Trout said. "He's played the game in the right way for so long, and he's a gamer. Always running out ground balls and just plays the game hard every day.''

Noting the irony of holding court in the spotlight, Utley wrapped things up in 10 minutes, stating that there was a team meeting soon and he hadn't been late to one in his career.

And then, in keeping with his understated demeanor, he was gone.