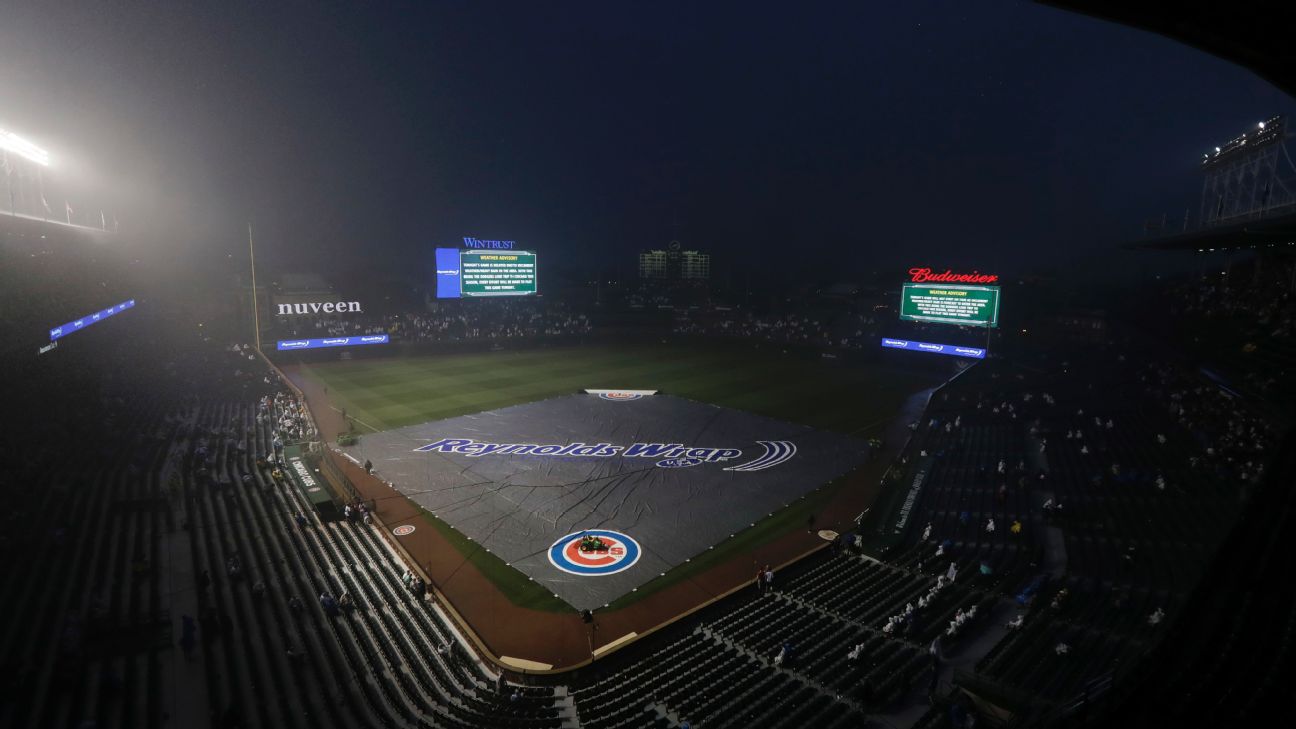 CHICAGO -- There was plenty of action at Wrigley Field on Monday. Unfortunately, none of it involved playing an actual game of baseball and the end result left thousands of fans in the dark.

The opener of a key midseason series between the Chicago Cubs and Los Angeles Dodgers was postponed on Monday because of rain systems moving through the Chicago area and because of a partial power outage at the old ballpark that the Cubs were never quite able to fix.

"As many of you could probably tell from the press box, we were having issues with the lights on the right-field side this evening," said Cubs spokesman Julian Green. "Unfortunately, we weren't able to get them fully operational for tonight. It appears to be a limited power outage in the ballpark."

The rain/dark-out will be made up on Tuesday as the first part of a split doubleheader scheduled at 1:05 p.m. ET. The nightcap will be played at the regularly scheduled time of 8:05 p.m. ET.

Postponements are a routine part of the baseball season, of course, especially in the Midwest during thunderstorm season. However, little was routine about the way Monday's events unfolded.

After an unusually stifling day in Chicago, clouds began to move in a couple of hours before the game. About 45 minutes before the game was scheduled begin, the Cubs announced that the start of the contest would be delayed because of the incoming system and added, "every effort will be made to play."

Every effort was made to play, though the lights proved to be an unexpected wild card.

"It takes 45 minutes to get the field ready to play," Green said. "Even in the face of rain, if the lights came back on, we wanted to make sure that we could play baseball even if it was a limited window of opportunity."

The gates of the park were opened as scheduled and a large crowd gathered in the stands to look at the tarp covering the field. About an hour after the game was scheduled to begin, it finally began to rain. Perhaps in a version of the Bronx cheer, some fans began to cheer.

It rained heavily for a while but the storm passed, the tarp was rolled up and preparations began to get the field ready for play. The fans settled back into their seats, including a large contingent of a Dodgers fan club who occasionally broke into "Let's go Dodgers!" chants.

However, the light banks atop the right-field roof of Wrigley had gone dark, leaving that side of the park dark, as well as sections on the opposite side of the field that the lights would have been illuminating. The work on the field finished but the lights remained out.

Eventually, the Cubs' grounds crew re-emerged, brought the tarp back onto the field and amid a wash of boos re-covered the field. According to the updated forecast, another system was heading in the direction of Wrigley.

The uncooperative light bank came back on to cheers, but failed again a few minutes later. Finally, after a delay of 2 hours, 53 minutes, and about 3 hours after the original delay announcement, the postponement was announced and the stands emptied.

"I wouldn't call it a calamity," Green said. "It's just part of the game. We've all experienced significant rainfall and had to call some games. This has certainly been, not only for the Chicago Cubs but Chicago in general, a really interesting spring and summer season. We're taking out licks just like everybody else is."

The pitching matchups for Tuesday's doubleheader remain in the same sequence as previously announced. The first game will pit Chicago's Tyler Chatwood against L.A.'s Kenta Maeda. In the second game, the Cubs will throw Mike Montgomery, while the Dodgers will start Rich Hill in his first game off the disabled. list.

It wasn't a lost night for the Cubs, however. With Milwaukee's loss to Pittsburgh, Chicago moved into first place by percentage points in the National League Central. As for that second storms system, An hour after the postponement became official, it still had not arrived.

But the light on the right-field roof? They were still out.