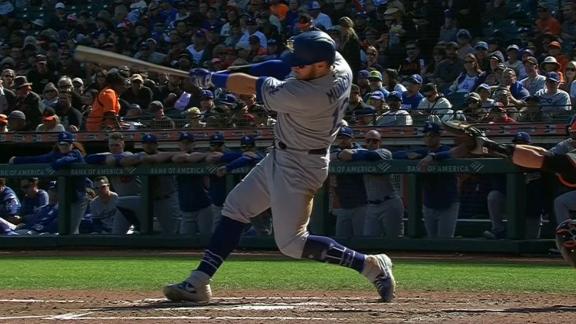 With one game left in the regular season, they're both in good position.

Ryu secured the major league ERA title at 2.32 with seven sharp innings and the Dodgers matched a franchise record with their 105th victory, beating the San Francisco Giants 2-0 on Saturday for their sixth straight win.

The National League West champions tied the win mark of the 1953 "Boys of Summer" team based in Brooklyn that included Jackie Robinson, Duke Snider and other Hall of Famers.

"I'm very proud of that," manager Dave Roberts said. "You don't just show up and win 105 games against very good teams all year long. That's a credit to everybody and just a continued focus each day to get better. It's a really fun and good, talented group."

The Dodgers began the day one game behind Houston for the best record in baseball and one game ahead of the Yankees. Los Angeles will begin the division series next Thursday at home against the NL wild-card winner.

Ryu (14-5) allowed five hits, struck out seven and didn't walk a batter for a third straight start. He also hit an RBI single in the fifth for the game's first run.

Roberts is calling for his Korean left-hander to win the NL Cy Young Award -- even if Ryu himself is giving the nod to reigning winner Jacob deGrom, who's second in ERA at 2.43 for the Mets.

"There were so many good pitchers this season, it possibly might be a tough decision for you as well, but I honestly think Jacob deGrom deserves it and you should probably vote for him," Ryu said through an interpreter and with a wry smile.

Kenta Maeda pitched the eighth. Kenley Jansen hit Evan Longoria to start the ninth and gave up Kevin Pillar's single before striking out three for his 33rd save.

Max Muncy hit his 35th homer in the sixth off rookie Logan Webb (2-3). Webb singled in the fifth for his first major league hit.

Retiring Giants manager Bruce Bochy oversaw his 4,031st game, moving past Sparky Anderson for sole possession of seventh place on the all-time list while managing his second-to-last game with San Francisco. Bochy was honored on the field before the game by San Francisco Mayor London Breed, who presented Bochy with a key to the city.

Webb, a top pitching prospect, allowed two runs on six hits in six innings, struck out five and walked one in his eighth career start.

"We faced a very good pitcher and we were just a hit away from getting things going, just like last night," Bochy said.

Madison Bumgarner will be ready Sunday even if he's not on the mound as originally planned -- Bochy hinted "he'll have his spikes on," so perhaps be prepared for a pinch-hit appearance and one final ovation from the home crowd.

"We thought that would be the best thing for both of us," Bumgarner said Saturday.

The 2014 World Series MVP can become a free agent, so Tuesday might have been his final start for the Giants. He is wrapping up a contract singed in April 2012 that included a $12 million contract option this year, and the Giants opted not to deal him at the trade deadline.

"I'm sure I'll make my way back here one way or another," he said.

Peter Magowan, who died in January, was honored pregame with a plaque on the Giants Wall of Fame he started as San Francisco's managing general partner.

"It was good to get Peter's plaque up there, with what he's done for the San Francisco Giants and the impact he made keeping them here and really in the community," Bochy said. "I know that he'd be very proud. ... Peter, he did a lot for me."

Dodgers: LF A.J. Pollock sat out after being hit in the left knee with a pitch and leaving during the fifth inning of Friday's 9-2 win with a bruised knee. ... Roberts said 3B Justin Turner -- missing a fourth straight game with back tightness -- won't play Sunday. Instead, he will get some simulated work done during Tuesday's workout day back home ahead of the division series. Turner worked throwing and swinging in the cage again Saturday as he did Friday. "If he wasn't able to kind of move around and swing the bat, I'd probably be a little concerned, but since he's doing that I feel confident he'll be fine," Roberts said.

Giants: C Buster Posey returned to the starting lineup after three days not playing at all following a 16-inning game Tuesday in which he caught 13 of those innings.