The Dodgers scored 11 runs during the first inning of Game 3, the most runs scored in an inning in MLB postseason history.
KABC 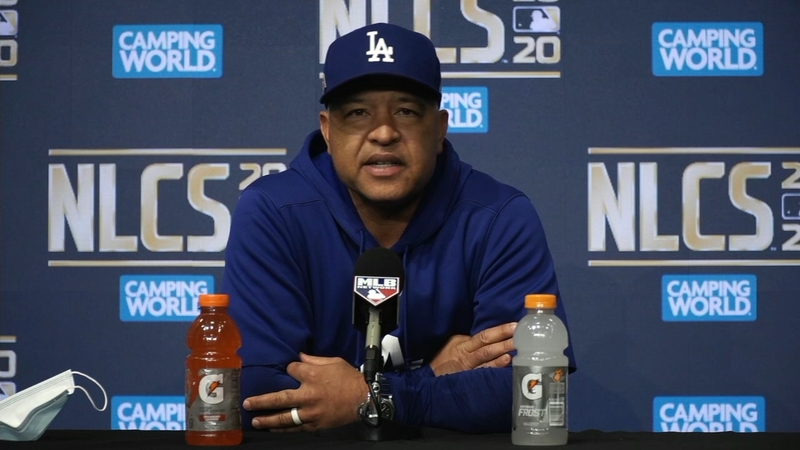 After dropping the first two games of the NLCS, the Dodgers roared into Game 3 with a record-setting performance in their win over the Atlanta Braves.

Los Angeles opened up the game with 11 runs in the first - the highest-scoring inning ever in a postseason MLB game.

By the third inning, they had racked up the score to 15-1, breaking the Dodgers franchise record for most runs scored in a postseason game.

The score stayed there until the ninth inning, when Atlanta eked out two more runs for a 15-3 final tally.

The National League Conference Series now stands at 2-1 in favor of Atlanta. Game 4 is Thursday at 5:08 p.m.

Clayton Kershaw, who was out with back spasms earlier in the series, is expected to pitch Thursday for the Dodgers, with Bryse Wilson on the mound for Atlanta.

Wednesday's single-inning record happened to be set against the same team that was on the wrong side of the previous mark. Last season, the Braves allowed 10 runs in the first inning in the deciding Game 5 of the NL Division Series against St. Louis.

The Braves had only allowed 13 runs total in all seven previous games combined this postseason.

A grand slam by Max Muncy off reliever Grant Dayton was the third homer in that first inning, matching another LCS record.

After Mookie Betts led off the game with an infield single on the first pitch, Corey Seager drove him home with a double on the next pitch. Joc Pederson hit a three-run homer and Edwin Rios later went deep on consecutive pitches against Kyle Wright, who then walked the No. 9 batter before Dayton took over.

Betts walked before Seager had an RBI single, Justin Turner was hit by a pitch and Muncy went deep. Will Smith, the record-matching 14th batter in the inning, struck out to end it.

The Dodgers led 11-0 entering the second inning after center fielder Cody Bellinger robbed the Braves' Ozzie Albies with a leaping catch at the wall that stranded two runners in the bottom of the first. Bellinger then led off the second with a homer.

Los Angeles had seven hits, three walks and a hit batter in that 32-minutes at the plate, the 29,786th half-inning in postseason history.

Atlanta had allowed only six runs in its first six playoff games, including four shutouts, going into Game 2 on Tuesday night. The Dodgers scored four runs in the bottom of the ninth inning of an 8-7 loss, then had the 11-run first Wednesday.

Los Angeles tied a franchise record for a postseason game with its four homers through two innings. The all-time postseason mark for homers in a game is six by the Chicago Cubs in Game 3 of the 2015 NLDS against the Cardinals.

Both teams had young starting pitchers for Game 3: For the Braves Kyle Wright, who threw six scoreless innings against the Marlins in the NLDS but had a 5.21 ERA in eight starts in the regular season, and for the Dodgers Julio Urias, who has allowed one unearned run with 11 Ks in eight innings in the postseason.

Wright was pulled from the game during the first inning after giving up six runs.

The Dodgers would continue piling on, scoring one run in the second inning and three more in the third to go up 15-0. Before Game 3 the most runs the Dodgers ever scored in a postseason game was 14.

Atlanta finally got on the board in the third after outfielder Cristian Pache hit a solo homer to left field to make the score 15-1.