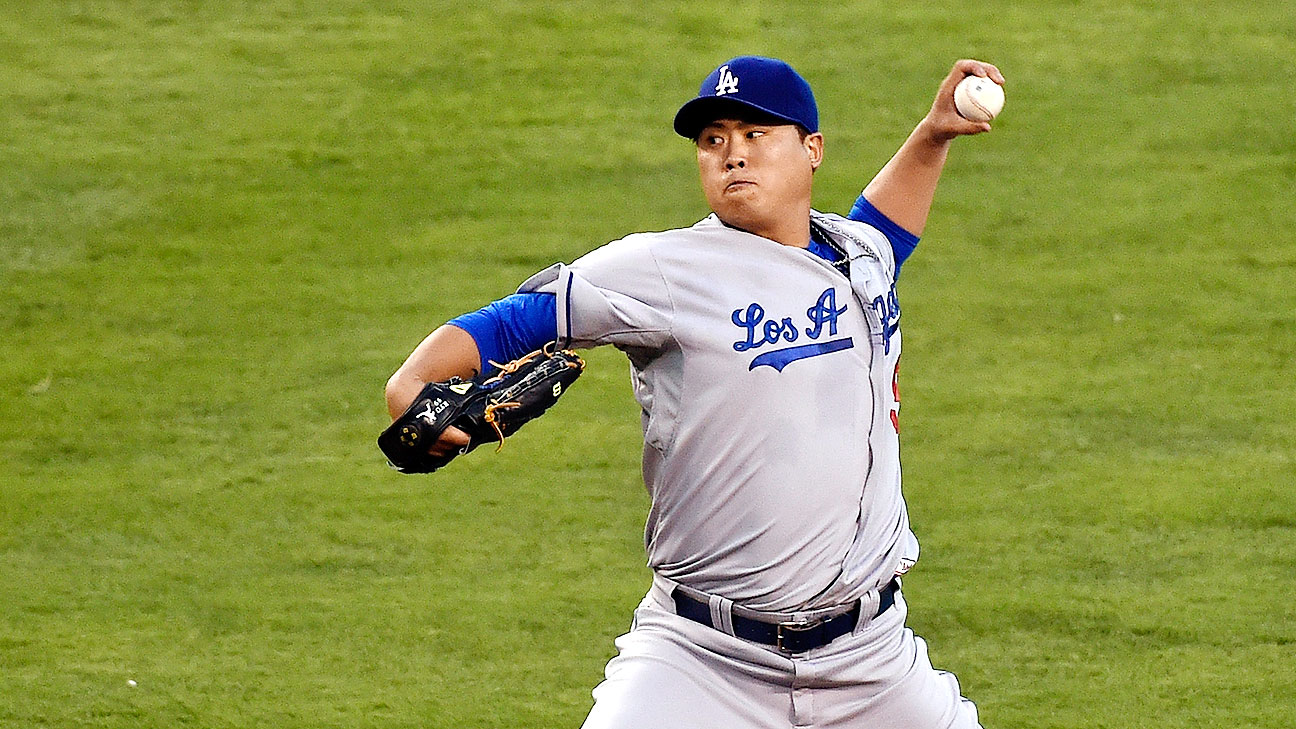 MILWAUKEE -- The Dodgers will start left-hander Hyun-Jin Ryu in Game 2, righty Walker Buehler in Game 3 and lefty Rich Hill in Game 4 of their National League Championship Series against the Brewers.

There was some thought to potentially going with Ryu in Game 3 because his numbers have looked so good at home this season, but the Dodgers felt it was more important that he not have too much time off between starts.

Ryu, who displaced Clayton Kershaw as the Game 1 starter in the NL Division Series, will take the Miller Park mound Saturday on eight days' rest. Buehler, who gave up five runs in the second inning of NLDS Game 3, will be on seven days' rest by Monday's game at Dodger Stadium.

The Brewers are countering with back-to-back lefties in the first two games -- Gio Gonzalez and Wade Miley, respectively -- in hopes of weakening a Dodgers lineup that features several potent left-handed hitters. Righty Jhoulys Chacin, Milwaukee's best and most consistent starter all season, won't pitch until Game 3 but can help out of the bullpen in Game 1.

The Dodgers will start Kershaw in Game 1, which begins Friday at 8:09 p.m. ET.

"We like the matchup against their lineup," Brewers manager Craig Counsell said of opening the series with Gonzalez, who has a 1.89 ERA in six career starts against the Dodgers. "Look, it's no secret that we're going to use our pitching a little differently than the traditionalists would like. And so for us the first matchup that we liked was Gio on the mound. We're asking Gio to go out there and get a bunch of outs. How many, you know, we'll just see how it goes."

Dodgers manager Dave Roberts said his lineup for Game 1 will be "somewhat similar" to the one he rolled out against Atlanta Braves lefty Sean Newcomb in the NLDS, but he added that he "might tweak a thing or two" to ensure that he is prepared to match up against the Brewers' collection of devastating relief pitchers.

Roberts might try to keep a good right-handed hitter off his bench to potentially bat against lefty Josh Hader, but it won't be David Freese, who will start at first base in place of Max Muncy.

"It's as deep a bullpen as you're going to see in the big leagues," Roberts said before his team's Thursday night workout from Miller Park. "Very good arms. Very neutral as far as left hand versus right hand, but the quality isn't compensated at all. I like our position players, too. So there's going to be some kind of chess played this series, and that's part of the fun."

Counsell is quick to turn to his bullpen, which absorbed the majors' fifth-most innings and finished with the eight-lowest WHIP during the regular season. But Roberts has said that the presence of those relievers -- especially Hader, Jeremy Jeffress, Corey Knebel and Joakim Soria -- won't keep his hitters from trying to drive up the opposing starters' pitch counts.