Dodgers will be 'remembered forever' if they win championship 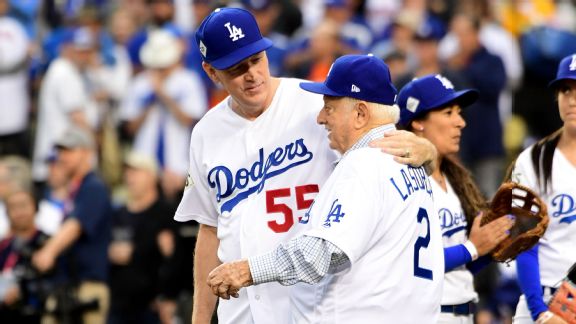 LOS ANGELES --Dodgersmanager Dave Roberts was watching his team's batting practice Tuesday afternoon when he saw Ron Cey and Orel Hershiser pacing. He smiled as he walked toward both former players and gave each a hug.

Hershiser, who played for theDodgersfor 13 years and won the 1988 World Series MVP, and Cey, who played for the Dodgers for 12 seasons and won the 1981 World Series MVP, are fixtures at Dodger Stadium. Hershiser is an analyst on the team's television broadcasts, and Cey has worked for the Dodgers in marketing and community relations for the past two decades.

Moments later, Roberts put his arm around Don Newcombe, who won a World Series with the Dodgers in 1955 and won the 1956 Cy Young Award and National League MVP. The skipper also took a moment to chat with Tommy Lasorda, who was the Dodgers' manager when the Dodgers won the World Series in 1981 and 1988. Newcombe and Lasorda are now special advisors to the chairman with the Dodgers.

"This franchise is so special," Roberts told ESPN. "They take care of their winners here forever. There are only a few franchises that can really relate to having the tradition and the name recognition that we have. So when you see Tommy Lasorda, Sandy Koufax and Don Newcombe and all these great people here to support us, it's something we don't take for granted. We respect them and the game so much. We want to complete that gap."

The only way for the current Dodgers to join the exclusive club of franchise champions is to take Game 7 on Wednesday against the Houston Astros and become the first Dodgers team to win a World Series since 1988 and the first to win it in Los Angeles since 1963. While the Los Angeles metropolitan area has a crowded sports landscape with two teams in every major sports league, it's a distinctly Lakers and Dodgers town, and when those teams are winning, this community of 18 million comes together unlike they do for anything else.

Los Angeles has been a sea of blue and white during October, with every local television and radio station dedicating hours to the Dodgers, and local restaurants and bars concocting anything remotely baseball related and slapping the "Dodgers" name on it.

Famed Los Angeles hot dog spot Pink's has changed its name to Blue's during the World Series and painted its iconic pink facade blue and white for the first time in 78 years, with Dodgers logos and players names painted on the windows. In Little Tokyo, Baldoria Bar is almost dry after offering $1 shots of whisky after every Dodgers home run in the World Series, but they're still promising free champagne for everyone at the bar if the Dodgers win the World Series.

Their televisions will represent just a couple of the millions of TV sets that will be tuned to the game. Sunday's Game 5 alone pulled in an impressive 32.8 household rating and a 52 share, the largest World Series television audience in Los Angeles in 15 years.

While the city is known for the glitz and glamour of Hollywood and catering to actors and celebrities, there's nothing quite like winning a championship in Los Angeles, especially if you're on the Lakers or Dodgers.

Steve Garvey retired in 1987 and played his final five seasons for the San Diego Padres, but he is still a fixture at Dodgers games after a 14-year career with the team, during which he won the 1981 World Series and was the National League Championship Series MVP in 1978.

"When you win a title here, there's nothing better," Garvey said. "It's a big market and a historic franchise everyone is familiar with. When you win in Los Angeles, it makes a lasting statement. Baseball has become very local, so if you're on a team like the Dodgers in Los Angeles and you're able to win a title after 29 long years, it would be significant and the players on this team will be remembered forever."

While the Lakers won over the hearts of Los Angeles after playing in 16 NBA Finals from 1980 to 2010 and winning 10 championships during that time, the city for many years was simply a Dodgers town after winning five World Series in their first 30 years in the city after moving from Brooklyn before the 1958 season. But the nearly three-decade gap between World Series appearances for the Dodgers has created a void in championship hardware and postseason heroes for the team to honor and revere.

"Going to the World Series was something Dodgers fans used to take for granted," Dodgers team historian Mark Langill said. "You even appreciated the heartbreaks, because for every 1977 and 1978, when they lost, they were right back in it in 1981. There wasn't too much time passing before they were back in the World Series. And then suddenly there's this big drought where they don't even win a postseason game for 16 years and Jose Lima becomes this beacon of a Dodgers victory in the postseason when they lose the 2004 NLDS to St. Louis 3-1."

Championships are the only currency worth anything in Los Angeles. As great as Clayton Kershaw has been, it's hard for Dodgers fans to put him in the same class as Koufax until he wins a championship. Just winning one championship can put you in that rarefied class. Hershiser retired in 2000 after playing five of his final six years with the Cleveland Indians, San Francisco Giants and New York Mets, but he will forever be a Dodger after his magical postseason in 1988. He and Lasorda threw out the first pitch before Tuesday's Game 6.

"When you are champion in Los Angeles, they not only crown you in your sport, they crown you throughout the city," said Hershiser, who is now the color analyst for Dodgers television broadcasts during the regular season. "This has always been a city of champions, and when you're a part of one of those teams and part of one of those magical moments, they never forget it."

The field at Dodger Stadium is often filled with alumni before games, and the one thing they all have in common is that they've won a championship. If these Dodgers are able to win a World Series, it will be only a matter of time before the gap between past players and future players are filled by the likes of Cody Bellinger, Joc Pederson and Corey Seager.