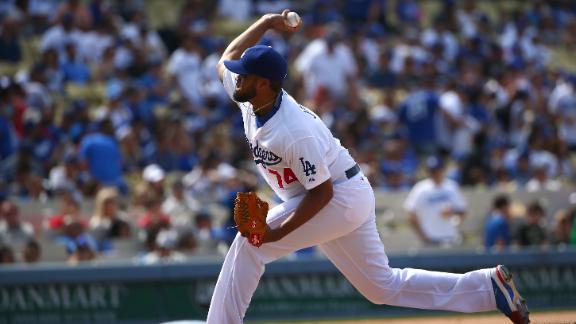 LOS ANGELES -- The Dodgers shed a bit more light Thursday on the mysterious circumstances that made their closer unavailable to them as their bullpen was blowing a two-run, ninth-inning lead to the Colorado Rockies the night before.

During Wednesday's game at Coors Field, Kenley Jansen was undergoing tests, including an electrocardiogram, to rule out a recurrence of the irregular heartbeat known as atrial fibrillation that had affected him three years earlier in Colorado, he said.

Jansen said he alerted the team's trainers that he had an upset stomach and headache in the first inning. He was treated with intravenous fluids and given some tests, including the EKG, which found that his heart was in a normal rhythm, Jansen said. Because his blood pressure was elevated and because of his history of A-fib, the consulting doctor recommended Jansen not pitch in the game.

Jansen was cleared by the team's medical staff to pitch in Thursday's 7-1 loss at Dodger Stadium to theSt. Louis Cardinals, though he did not make an appearance.

"Kenley's had some history, and I don't think anybody's willing, at this point, to take any chances with his health over trying to win a game," Dodgers manager Don Mattingly said.

The mystery grew in the wee hours of the morning at Coors Field after Mattingly gave only curt, vague answers when asked after the game about Jansen's lack of availability, repeating only that he was unavailable. Four Dodgers relievers walked three batters, gave up two hits and saw Colorado score three times to win it. Mattingly wouldn't even tell reporters whether it was a health-related matter or something else, which led to speculation.

Jansen did not speak to reporters after the game. He had told head trainer Stan Conte that he did not want the team to discuss his condition, and Health Insurance Portability and Accountability Act (HIPAA) rules protect players' privacy in such situations.

"There are all kinds of reasons why you wouldn't want to talk about something and alarm anybody at 1 o'clock in the morning," Mattingly said. "You respect a player's wishes at that moment."

On Thursday -- coincidentally Kenley Jansen bobblehead night at Dodger Stadium -- Jansen said he didn't speak after the game in part because of his frustration over how the day had played out. Jansen had an ablation to correct his irregular heartbeat in October 2012. He said he has had no diagnosed recurrences of atrial fibrillation since then.

"I didn't feel like talking about myself at that time," Jansen said. "When they started the IV, I had all these memories of all the stuff that happened there, like, 'Here we go again,' dealing with stuff like that. Then, you see how the ninth's going and you feel like you let your teammates down and all that stuff."

"It gets you panicked a little bit," he said.