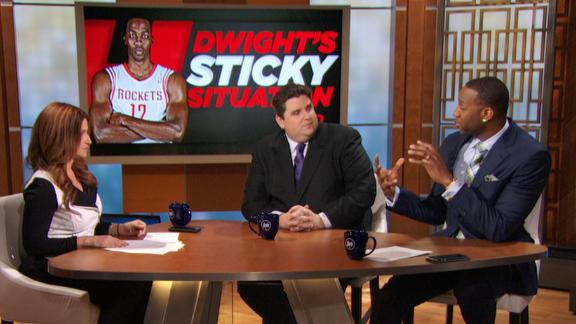 OKLAHOMA CITY -- Dwight Howard is surprised and disappointed that he's being labeled a cheater.

On Monday, the NBA issued an official warning to the Rockets for the center's use of a sticky substance on his hands during Houston's loss to the Atlanta Hawks on Saturday. Sources told ESPN's Marc Stein that will be the extent of the punishment.

Sources told ESPN that the NBA notified its 30 teams via league memorandum Monday that the Rockets were issued a formal warning because of "the team's use of an adhesive substance on a player's hands during a game."

Atlanta's Paul Millsapcomplained about the ball while shooting free throws with 3:36 remaining in the first quarter Saturday. Howard had made a layup before Millsap's free throws.

Howard said Monday that he doesn't understand what all the fuss is about.

"I just think that it's getting overblown, like I'm doing something crazy," he said. "But again, I've never been a cheater, never been the type of player that has to do something illegal to win. It's upsetting, but I can't control it now."

After the incident, referees gave warnings to each bench and then approached the scorer's table, where they were directed to a can covered with white tape. The can was removed, and one of the officials told the scorer to alert him if it was seen again.

Howard noted that many players use sprays and powders on their hands during games.

"I've been using the spray for the last five years," he said. "I never hid the spray. I never did anything to try to hide what I was doing. It was just something to make my hands dry."

There was no penalty issued during the game.

Bickerstaff was surprised anyone asked about the can and surprised by reports that the team tried to hide it from the officials.

"Every time Dwight goes into the game, it's the same routine," he said. "It was no cover-up on my part."

Bickerstaff said Howard did nothing wrong.

"He's never run to the back in the locker room to try to trick anyone," he said. "It was never brought to our attention. No one's ever said anything to us about it. If you go back, you can watch every single one of our games for the past three years. It's [the can] there, so we were obviously surprised by the attention it has drawn."

The Rockets are more worried about star guard James Harden's status for Tuesday's game against the Oklahoma City Thunder. Harden missed practice with a sprained left ankle and is listed as questionable. He has missed just one game the past two seasons, and that was due to a suspension for kicking LeBron James last season.

ESPN Rockets reporter Calvin Watkins and The Associated Press contributed to this report.

Stephen A.: Dwight Howard has fallen off the map
Stephen A. Smith offers his take on Dwight Howard's use of a sticky substance on his hands during Houston's loss to Atlanta.