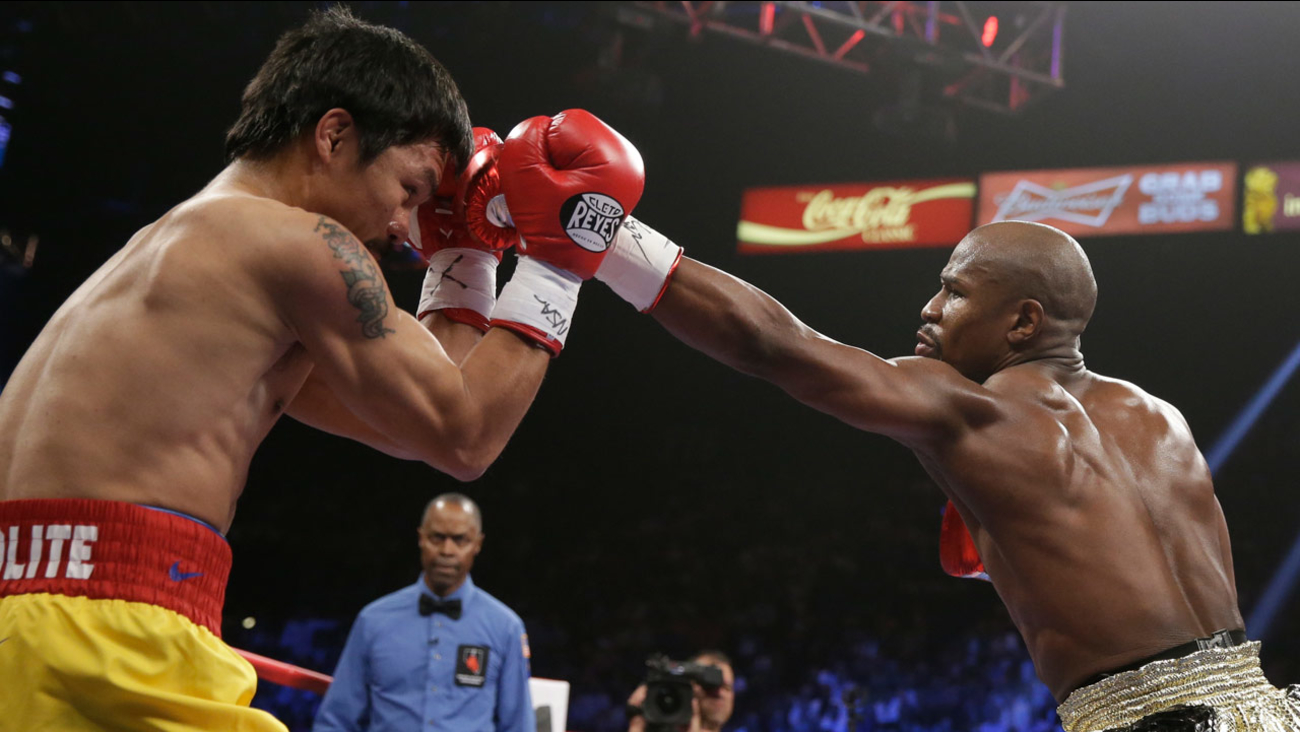 Floyd Mayweather Jr., right, trades blows with Manny Pacquiao, from the Philippines, during their welterweight title fight on Saturday, May 2, 2015 in Las Vegas. (AP Photo/Isaac Brekken)

LAS VEGAS -- The pressure of a $180 million payday never got to Floyd Mayweather Jr., even if the richest fight ever wasn't the best.

Using his reach and his jab Saturday night, Mayweather frustrated Manny Pacquiao, piling up enough points to win a unanimous decision in their welterweight title bout. Mayweather remained unbeaten in 48 fights with a win that cemented his legacy as the best of his generation.

Pacquiao did what he wanted to do, chasing Mayweather around the ring most of the fight. But he was never able to land a sustained volume of punches, often looking frustrated with his hands finding nothing but air as Mayweather worked his defensive wizardry once again. 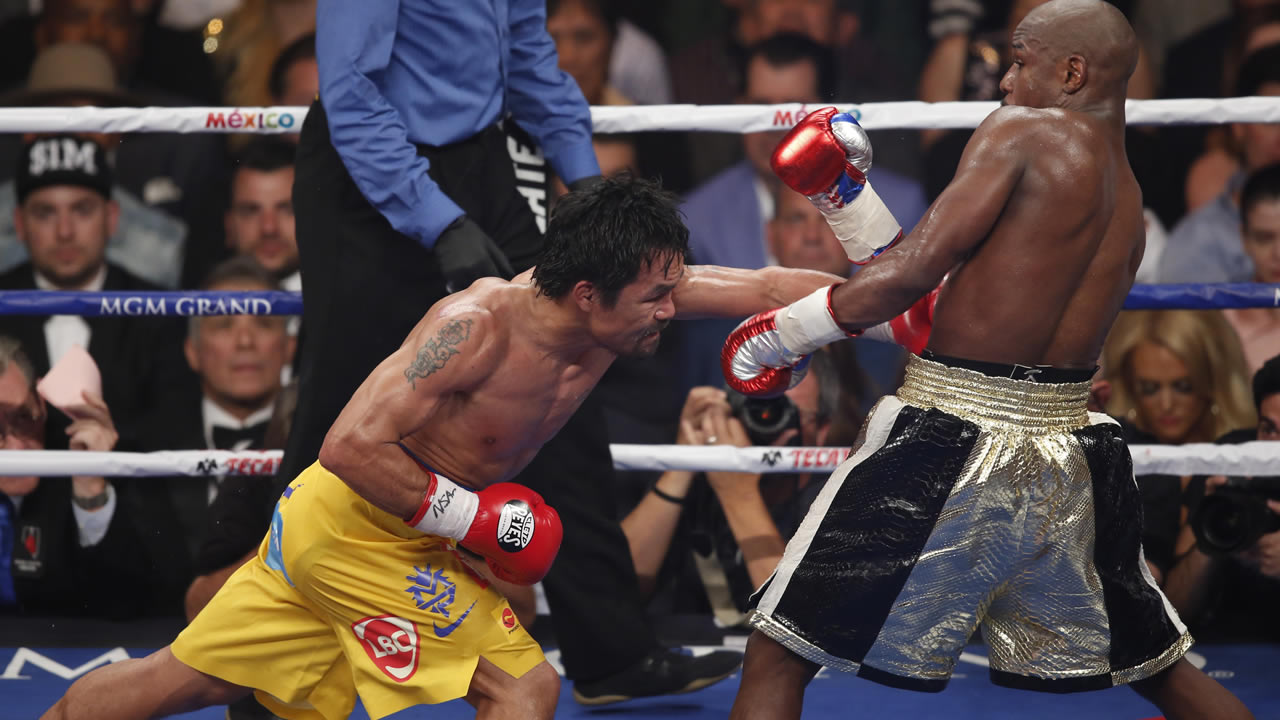 PHOTOS: Mayweather vs. Pacquiao
One of the most hyped fights in boxing history took place at the MGM Grand in Las Vegas on Saturday.

"I take my hat off to Manny Pacquiao. I see now why he is at the pinnacle of boxing," Mayweather said. "I knew he was going to push me, win some rounds. I wasn't being hit with a lot of shots until I sit in a pocket and he landed a lot of shots."

The richest fight in boxing history - a bout that made Mayweather at least $180 million - wasn't an artistic triumph for either fighter. Far from it, with long periods where both men fought cautiously, looking for an edge.

Pacquiao threw far fewer punches than he normally does in a fight, with Mayweather actually credited with throwing more.

"I thought I won the fight. He didn't do nothing except move outside," Pacquiao said. "I got him many times, I saw the punches."

There were no knockdowns, and neither fighter seemed terribly hurt at any time. Pacquiao landed probably the biggest punch in the fight in the fourth round - a left hand that sent Mayweather into the ropes - but he wasn't able to consistently land against the elusive champion.

The fight was a chess match, with Mayweather using his jab to keep Pacquiao away most of the fight. Pacquiao tried to force the action, but Mayweather was often out of his reach by the time he found his way inside.

"He's a very awkward fighter, so I had to take my time and watch him close," Mayweather said.

Mayweather fought confidently in the late rounds, winning the last two rounds on all three scorecards. In the final seconds of the fight he raised his right hand in victory and after the bell rang stood on the ropes, pounding his heart with his gloves.

"You're tough," he said to Pacquiao, hugging him in the ring.

It was vintage Mayweather, even if it didn't please the crowd of 16,507 that paid prices unheard of for a title fight. They cheered every time Pacquiao threw a punch, hoping against hope that he would land a big shot and become the first fighter to beat Mayweather.

But a good percentage of what he threw never landed. Mayweather often came back with straight right hands, then moved away before Pacquiao could respond.

"I thought we pulled it out," Pacquiao trainer Freddie Roach said. "I asked my man to throw more combinations between rounds. I thought he fought flat-footed too many times."

Ringside punch stats showed Mayweather landing 148 punches of 435, while Pacquiao landed 81 of 429. The volume of punches for Pacquiao was a lot lower than the 700 or more he usually throws in a fight as he tried to measure his aggression against an opponent who was hard to trap.

Five years in the making, the richest fight ever unfolded before a glittering crowd of celebrities, high rollers and people who had enough money to pay for ringside seats going for $40,000 and up. Before it did, though, it was delayed about a half hour because cable and satellite systems were having trouble keeping up with the pay-per-view demand.

They paid big money to watch two superstars fight for their legacies - and in Pacquiao's case his country - in addition to the staggering paydays for both.

Pacquiao had vowed to take the fight to Mayweather and force him into a war. His camp thought Mayweather's 38-year-old legs weren't what they once were, and that he couldn't be on the move the entire fight.

"He is moving around, not easy to throw punches when people moving around," Pacquiao said. " When he stayed, I threw a lot of punches. That's a fight."

But Mayweather proved them wrong, moving well and taking pot shots at Pacquiao. His only real moment of trouble came in the fourth round when Pacquiao landed his left hand and then flurried to Mayweather's head on the ropes, but he escaped and shook his head at Pacquiao as if to say you didn't hurt me.

In the corner between rounds, Mayweather's father, Floyd Sr. kept yelling at his son to do more. But Mayweather was content to stick with what was working and not take a risk that could cost him the fight.

"I'm a calculated fighter, he is a tough competitor," Mayweather said. "My dad wanted me to do more but Pacquiao is an awkward fighter."

Mayweather said that his fight in September against a yet-to-be-determined opponent would be his last.

Mayweather is also very rich, getting 60 percent of the $300 million purse, depending on pay-per-view sales. The live gate alone was more than $70 million, and the bout was expected to easily smash the pay-per-view record of 2.48 million buys set in 2007 when Mayweather fought Oscar De La Hoya.

But while the frenzy over the fight pushed up tickets to 3-4 times their retail price the week of the fight, prices dropped dramatically as the fight neared and some tickets were being resold for less than face value.

Boxing fans called for the fight to be made five years ago, when both men were in their undisputed prime. But squabbles over promoters, drug testing and a variety of other issues sidelined it until Pacquiao beat Chris Algieri in November and immediately launched a campaign to get the fight made.

When they finally got it, it wasn't the fight it might have been five years ago. But it was enough to settle the question that boxing fans had asked for years - who would win the big welterweight match-up of the best fighters of their time.
Related topics:
sportslas vegasfightboxing
Copyright © 2021 by The Associated Press. All Rights Reserved.
RELATED
Mayweather, Pacquiao fight delayed for cable overload issues
PHOTOS: Mayweather vs. Pacquiao
Mayweather, Pacquiao fight expected to gross $400M
VIDEO: Fans barely contain excitement for Mayweather, Pacquiao fight
TOP STORIES
LAUSD to require COVID-19 testing for all students, staff
Lakers to acquire Russell Westbrook, ESPN reports
Great Park dropping reference to Orange County in its name
Garcetti signs plan to restrict homeless camps
Dodgers finalizing deal to acquire Scherzer, Turner
Video: Fight breaks out on 60 Freeway in Ontario after crash
How to convince someone to get the COVID-19 vaccine
Show More
Downtown LA venues welcoming back concert fans
Lawsuit filed by families of 9 killed in accident off San Diego coast
Scarlett Johansson sues Disney over 'Black Widow' release
Deputy shoots suspect at end of chase in Colton
New fair opens at Santa Anita Park, offering games, rides
More TOP STORIES News