From Alabama's stand to Joe Montana's rally soup: Why Jan. 1 1979 was the greatest bowl day 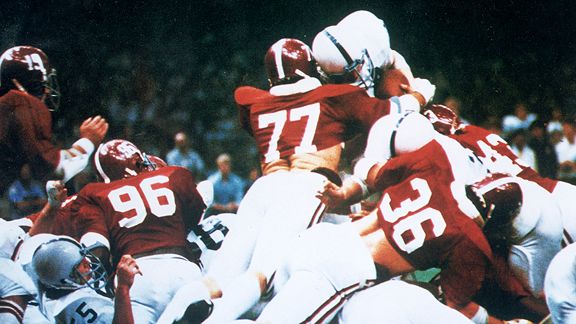 If you had to pick the greatest day in bowl history, it would be hard to beat the day that No. 2 Alabama stopped No. 1 Penn State on a fourth-quarter goal-line stand to win the Sugar Bowl and a national championship 14-7.

Oh, yeah? What about the day that Joe Montana, weakened by a virus and the icy, freezing rain at the Cotton Bowl, returned to the field and led No. 10 Notre Dame back from a 22-point, fourth-quarter deficit to defeat No. 9 Houston 35-34.

Turns out they were the same day, Jan. 1, 1979. Not only that, but those two bowls played out simultaneously -- the Sugar Bowl on ABC, the Cotton Bowl on CBS. If we're having a draft for the greatest New Year's Day -- and the greatest bowl season -- in history, I'll take the four-day weekend that ended on Monday, Jan. 1, and take my chances.

The other two games that day -- No. 3 USC defeating No. 5 Michigan 17-10 in the Rose Bowl, and No. 4 Oklahoma gaining postseason revenge for a late-season loss by defeating its Big Eight rival, No. 6 Nebraska 31-24 -- brought their own memorable moments to the first day of 1979. And in the days leading up to New Year's Day, a legendary coach got himself fired for his on-field behavior in one bowl, and another featured a comeback that presaged what Notre Dame would do on New Year's Day.

The matchup of No. 1 Penn State and No. 2 Alabama in the Sugar Bowl, the first game played between the top two teams in the Associated Press poll in seven years, came together after the last weekend of the regular season, in the finest horse-trading tradition of the bowl business in that era.

By the late 1970s, the bowls had made their deals with the major conference champions. The Rose Bowl matched the Big Ten and Pac-10 winners. The Sugar took the SEC champ; the Cotton, the SWC; and the Orange, the Big Eight. The opponents in the Sugar, Cotton and Orange bowls would come from the major independents (Notre Dame, Penn State, Miami, Florida State, etc.) and the conference runners-up.

For the week leading up to the final weekend, it looked as if Penn State would play Nebraska in the Orange Bowl. Though the Huskers had lost to Alabama 20-3 in the season opener, they had climbed steadily to No. 2, moving past the Crimson Tide, which had lost to USC 24-14.

Trojans third-year head coach John Robinson, then in his early 40s, remained in awe of Paul "Bear" Bryant, in his 34th season as a head coach, even after winning the game.

"He was like one of those gods of football," Robinson told authors Steve Bisheff and Loel Schrader in "Fight On!," their 2006 history of USC football. "At the end of the game, he came up to me, shook my hand and said, 'Y'all just beat the bleep out of us.' I mumbled back, 'Thank you, sir, thank you,' and kind of ran off in a daze."

But No. 2 Nebraska didn't survive long enough to play Penn State. One week after the Huskers broke a six-year losing streak to archrival Oklahoma by upsetting the Sooners 17-14, they lost their regular-season finale at home to Missouri 35-31. Nebraska remained Big Eight champion by virtue of beating Oklahoma, but it wasn't much consolation.

"They just beat us," Nebraska head coach Tom Osborne said as he fought back tears, according to the Lincoln Journal Star. "We (the coaches) were worried whether the players could play with the same intensity two weeks in a row. We didn't."

Alabama moved up, and Penn State went to the Sugar Bowl to play the Crimson Tide.

Field Scovell and Jim "Hoss" Brock, the two men who ran the Cotton Bowl, had been expected to chase No. 4 Oklahoma to play Houston. But Scovell and Brock would invite Notre Dame to play a ham sandwich if they could get away with it.

That left No. 4 Oklahoma available. Nebraska's reward for finally conquering Oklahoma was to go to the Orange Bowl and play ... Oklahoma.

"The thought hadn't even crossed my mind," Osborne said, according to the Journal Star. "It came completely out of the blue."

Nebraska thought it would play No. 7 Clemson, the ACC champ, which instead fell to the Gator Bowl to play No. 20 Ohio State. That Gator Bowl would prove to be another reason that the 1979 postseason rooted itself firmly in memory.

Buckeyes legend Woody Hayes coached the last game of his Hall of Fame career on Friday night, Dec. 29. No one knew that at the time; he hadn't, and never did, announce his retirement. In fact, Ohio State fired Hayes the next morning, not for losing the Gator Bowl to Clemson 17-15, but for how he reacted to the loss.

Late in the Gator Bowl, with Clemson clinging to the lead, Tigers linebacker Charlie Bauman intercepted a pass to seal the victory and returned it toward the Buckeyes sideline. Bauman was tackled right at Hayes' feet. The Ohio State coach erupted, grabbing Bauman off the ground and throwing a right cross that landed on Bauman's neck. Hayes' career didn't make it to lunch the following day.

The other bowl that set the table for New Year's Day took place on New Year's Eve, a rare Sunday night college football game. It wasn't so much because Stanford upset No. 11 Georgia 25-22 in the Astro-Bluebonnet Bowl. It was how the Cardinals did it (and they were Cardinals that season; the transition to the color Cardinal would not be complete until 1981).

The national weather map on New Year's Day 1979 wore a white sash, a cold front that started in Texas and angled northeast. For the nation's midsection, as was often the case on Jan. 1, it was a great day to stay inside and watch football.

Alabama and Penn State played a taut, tense game. Alabama scored late in the first half on a surprise 30-yard pass, a diving catch at the goal line by little-used Bruce Bolton. The teams traded touchdowns in the third quarter, and early in the final period, Penn State recovered a fumble deep in Tide territory, setting up Alabama's goal-line stand.

Tide fans of a certain vintage argue over which of the four stops on the goal-line stand is the most memorable. Defensive back Don McNeal made a tackle at the goal line on second down that appears to defy the laws of physics. Nittany Lions receiver Scott Fitzkee had the ball and was running into the end zone when McNeal, coming out of the end zone, knocked him sideways and directly out of bounds at the Alabama 1.

Fullback Matt Suhey failed to get across the goal line on third down. As the officials spotted the ball, Alabama defensive lineman Marty Lyons famously said to quarterback Chuck Fusina, "You better pass."

Paterno had the same instinct. He wrote in his autobiography that he wanted to pass, but he let his assistants overrule him. The fourth-down collision between Alabama linebacker Barry Krauss and Penn State back Mike Guman has reverberated for more than 40 years.

Krauss stopped Guman cold at the goal line and all but knocked himself out cold as well. Alabama hung on to win 14-7 and take its fifth national championship under Bryant.

The intensity in the temperate indoors of the Louisiana Superdome stood in stark contrast to the frigid temperature in Fair Park in Dallas, where a game of wild momentum swings began in 20-degree weather with a wind chill of minus-6. The Pittsburgh Press reported that the Cotton Bowl stadium had less than half of its capacity (then) of 72.000.

Notre Dame quickly established a 12-0 lead, only to flail as, over the first three quarters, Houston scored 34 consecutive points. The Irish offensive output dipped as steadily as the body temperature of its quarterback. Montana, fighting a virus, might have been the last person in a Fighting Irish uniform who should have been in the icy, freezing rain that pelted the Cotton Bowl. As the second half began, Montana stayed in the locker room, trying to get warm. He took in some chicken soup hoping to regain warmth and strength.

Unlike Stanford the night before, Notre Dame needed more than 4:30 to regain the lead. However, unlike Stanford, Notre Dame scored 23 points on its three touchdowns, getting two 2-point conversions. Montana returned to the game for the first one, with 7:37 left, after the Irish scored when Steve Cichy returned a blocked punt 33 yards for a touchdown.

Notre Dame scored again and converted another 2-point conversion at the 4:15 mark. Houston coach Bill Yeoman, faced with a fourth-and-1 at his own 29 in the final minute of the game, in full knowledge that the Cougars had just proven they couldn't protect their punter, chose to try to get the first down and seal the game. But the Irish stuffed Emmett King at the line, and took over on the Houston 29 with 28 seconds to play.

Montana didn't get the winning touchdown until the clock read all zeroes. On the game's final snap, Montana threw an 8-yard pass to Kris Haines for the winning score.

The Rose Bowl proved to be no match for either of the games that preceded it. However, it did contribute to the historical import of the day, thanks to the second-quarter touchdown by USC tailback Charles White, who leapt from the Michigan 3 toward the goal line. He clearly lost the ball outside the 1-yard-line, clear to everyone except line judge Gilbert Marchman, who thrust his hands to the sky to signal touchdown.

In those days, of course, we waited until the following day to read accounts of the game. On the front of the Los Angeles Times on the morning of Jan. 2, the legendary Jim Murray delivered the precise amount of wisecracking that White's touchdown demanded. Murray made a career out of wisecracks, of course, but few, if any, ever matched his description of this play.

"I don't know about you," Murray wrote, "but where I grew up you were supposed to have the football with you when you went into the end zone for a touchdown. When Charles White 'scored' a touchdown with 7:28 remaining in the second period, he seemed to have forgotten one small detail -- the ball.

"An official decided it was inconsequential. I guess he figured anybody could score carrying the ball. You have to admire a man who can put points on the board without it."

That night, as expected, a motivated Oklahoma defeated a deflated Nebraska 31-24. A remarkable New Year's Day ended more on the whimper side of the spectrum. But the bangs that led up to that finish make that Jan. 1, 1979 the most memorable in the history of the game. 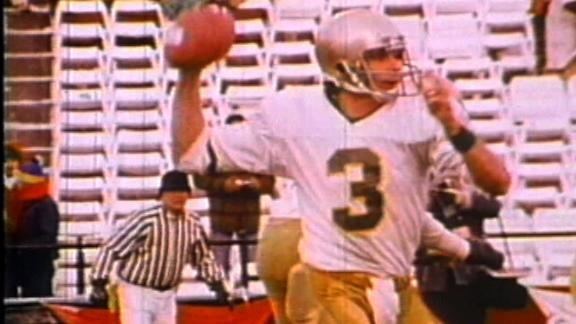