Grady Sizemore's time in Boston over 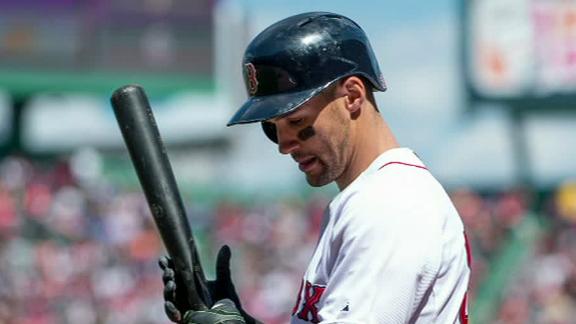 BOSTON -- The Grady Sizemore experiment in Boston appears to have come to an end.

"We were certainly hoping and thinking that this could have turned out different [and] we were still hoping it did up until very recently," Red Sox general manager Ben Cherington said. "It just got to a point where we didn't think we could give it more time. [We are] trying to find ways to create better roster alignment for [manager John Farrell] and his staff and so we made the decision to make the move."

Farrell said the team had been discussing a move regarding Sizemore for a couple of days before the decision was made Tuesday.

"Out of respect to Grady, we wanted to make the decision sooner rather than later if there are other opportunities for him," Farrell said.

Farrell said that the news came hard for Sizemore, who has lost playing time recently as a result of the emergence of Brock Holt and successful return of outfielder Daniel Nava. With Holt and Nava moving into starting positions in the Red Sox lineup (Holt making his first career start in center Tuesday night), it became difficult for Sizemore to get consistent at-bats.

"Grady Sizemore is about all the good things in this game," Farrell said. "From his performance, to the person he is, to his work ethic, the way he plays the game -- he's an exceptional person. This is a tough decision to part ways with a guy of his caliber. He's trying to do something that I don't know has been done in the game before. We commended him on his work ethic trying to get back to the level previous."

Signed as a free agent to an incentive-laden deal with a base salary of $750,000 in January, Sizemore represented a low-risk, high-reward option for the Red Sox. Attempting to return to the majors after undergoing seven surgeries for a variety of injuries that limited him to 104 games between 2010-2013, Sizemore was the story of the spring, hitting .310 in 42 exhibition at-bats and showing glimpses of the three-time All Star he once was for the Cleveland Indians.

The promise shown continued once the regular season came around as Sizemore won the starting center fielder job over rookie Jackie Bradley, Jr. and hit a home run in his second at-bat of the season. Since then, the 31-year-old outfielder has slowed down, perhaps finally showing the toll that trying to play a full major league season had on his body.

"From a medical treatment standpoint he was doing well. He wasn't really requiring any special attention or treatment," Cherington said. "The grind of a major league season and playing every day, it's hard to predict what's going to happen to the body. Since he hadn't been through it, he may just need to go through it a little more to find himself. Unfortunately we just weren't in a position to give him more time."

Sizemore's contract called for the possibility of more than $5 million in bonuses. At the time of his designation, he was 20 plate appearances away from reaching a $250,000 performance bonus. He also fell just shy (12 days) of a $250,000 roster bonus.

The Red Sox now have 10 days to either trade or release Sizemore. Cherington said the team didn't discuss a return to the minor leagues with Sizemore but would be open to it. However, his tone seemed to suggest that the two sides will go their separate ways.

"I'm guessing he'll probably try to see if there's a major league opportunity out there," Cherington said. "We'll be rooting hard for him. We'd all love to see him playing in the big leagues and playing well again. Hopefully that happens for him."

Cherington also said that trading Sizemore would be an option for the team.

"In fairness to Grady, I don't think we would draw that out very long," he said. "If anything happens in the next day or so, we'll see. If not, I think we'd probably just take the next step."

Meanwhile, Cecchini will return to the Red Sox for the second time this season to fill the void left by Sizemore on the roster. The move only figures to be temporary as outfielder Shane Victorino is expected to rejoin the team some point along their upcoming West Coast trip and a decision regarding starter Brandon Workman's suspension is expected this week, possibly leaving his scheduled start on Friday up in the air. Farrell said that Ceccini will serve as an option off the bench, primarily at third base.