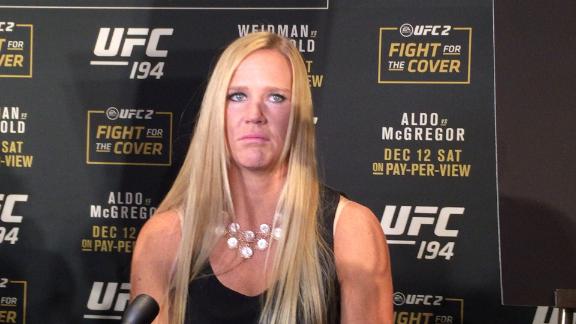 LAS VEGAS -- Holly Holm would rather get back in the cage while Ronda Rousey is recovering from their first fight.

The new UFC champion reluctantly realizes she might have to wait for their rematch.

Holm acknowledged Saturday that she might be facing a lengthy layoff before her first defense of the bantamweight belt she took from Rousey in spectacular fashion last month.

Rousey will need at least six months of recovery from Holm's head strikes before she is ready to fight again. UFC president Dana White said this week that the rematch will be Holm's next fight, likely at UFC 200 in Las Vegas on July 9.

"Eight months is a long time between fights, and I don't want to wait that long," Holm said before watching UFC 194 at the MGM Grand Garden Arena. "But if that's what it is, I'll do it and I'll be ready."

The 34-year-old Holm (10-0) would prefer to take another fight in the spring, and top bantamweight contender Miesha Tate has campaigned aggressively for a title shot.

Holm would welcome a showdown with Tate, but she realizes the UFC probably won't endanger what's expected to be a lucrative rematch with Rousey (12-1), the sport's biggest star.

Although Holm's boxing career conditioned her to prefer several fights each year, she isn't prepared to challenge the UFC's authority to pick the champ's schedule.

"I don't really like to lay out a path of what I think is best for me," Holm said. "I just like to take it as it comes. That's why I'm sitting here today. They gave me the fight with Ronda. A lot of people thought it was too early, and I just took the opportunity."

Holm utterly dominated Rousey, finishing the former champ with a second-round head kick that loosened her teeth. Holm showed no fear of Rousey's vaunted judo skills, even when they ended up pressed against the cage -- and she ended the fight with a showcase of her superior striking.

"I think she might try a little harder [to take the fight to the ground]," Holm said of the rematch. "I do expect a completely different fight. Nothing ever happens the same, and she'll be coming twice as aggressive. She's going to come back with a vengeance. I know that, and I just have to be ready."

Holm has spent the past four weeks on a lengthy goodwill tour celebrating her title. After several stops across the country for talk show appearances and interviews, roughly 20,000 people turned out this month to welcome her home to her native Albuquerque.

Holm spent this week watching fights during the UFC's three-day extravaganza leading up to Conor McGregor's showdown with Jose Aldo. Her celebrity took a quantum leap with her victory over Rousey, and she has been besieged by fans whenever she steps out in the UFC's hometown.

"We wouldn't have a job without fans, so I try to embrace this," Holm said. "Sometimes I have to have some patience, but I love the fans. We wouldn't be here without them. ... I've had a lot of life-changing moments in my life. Little moments can be life-changing, too. I feel like my life has changed in a good way."