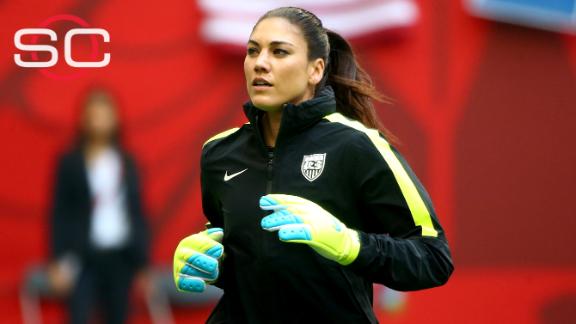 Hope Solo, the star goalie who led the U.S. soccer team to the Women's World Cup title in July, will again face domestic violence charges after a Washington state appeals court on Friday reversed a lower court's decision to dismiss a case in which she was alleged to have beaten up her nephew and half-sister.

Solo initially faced two counts of domestic violence in the fourth degree after an incident in June 2014 at the home of her half-sister, Teresa Obert. Solo told police on the scene she was the victim, but after interviews with all parties, she was charged with two counts of domestic violence. But as the case was nearing trial in January, a judge dismissed the charges on procedural grounds. City prosecutors, in a rare move, immediately appealed the decision.

A document filed Friday to the state court's website does not offer a timetable for a new trial, saying only "The court reverses the decision of the lower court and remands the case to the Kirkland (Washington) Municipal Court."

In June, Outside the Linesexamined the domestic violence case in detail and offered new information about the night in question. In an exclusive extended interview for that story, which also reported that Solo had to be restrained while in jail, Obert said her half-sister was in a drunken rage when she attacked Obert's 17-year-old son and herself.

"She grabbed him by the head and she kept slamming him into the cement over and over again," Obert told Outside the Lines. "So I came from behind her, and I pulled her over and, you know, to get her off my son. And then, once she got off, she started punching me in the face over and over again."

"We are shocked and disappointed by the judge's ruling this morning," Todd Maybrown, Solo's attorney, said in a statement. "However, we maintain our position that the charges in this case should have never been filed, that the original trial court's dismissal of the case was correct, and we plan to file an appeal of today's decision with the Court of Appeals."

Solo, though, has repeatedly denied she did anything wrong and used the case's original dismissal to begin to repair her image.

She told ABC's "Good Morning America" host Robin Roberts that she was a victim, not a criminal; an embattled woman who, as she always predicted, would be vindicated; a falsely accused athlete who had her day in court, faced the facts head on and was liberated by the truth.

In an espnW profile in June, Solo again denied assaulting anyone and spoke of her frustration with media coverage of the incident and how she has been portrayed: "From here on out, no matter what happens, I'll forever be associated with domestic violence."