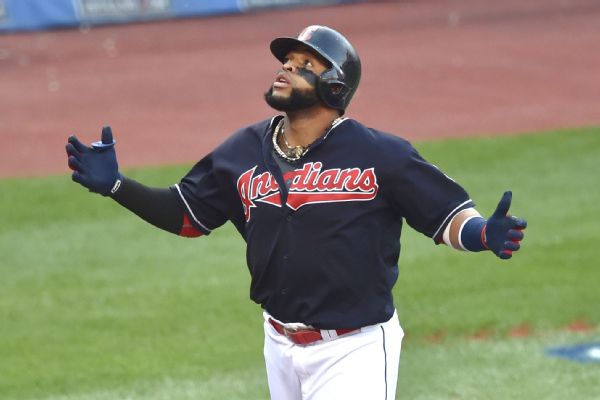 Carlos Santana is about to find out what it's like -- in Game 3 of the World Series with the wind blowing out to Waveland Avenue, millions watching on TV and well-oiled Cubs fans breathing down his neck.

Unable to use Santana as his designated hitter with the World Series switching to the fabled National League ballpark for the next three games, Indians manager Terry Francona is planning to move his DH into left field on Friday night.

It's risky, but Francona feels it's the right choice for his club. Santana has played only four innings in left during his career, and that was in 2012 during a 14-1 loss.

"I have anxiety about it," Francona said as he sat on the brick wall near Cleveland's dugout Thursday night. "I don't know how else to say it, and if he messes a ball up, I'll take responsibility because I don't think it's fair to put it on him. But you try to figure out, 'OK, what's our best way to win?' If we don't play him out there, that's the best way to have nobody second-guessing me."

Santana took some fly balls during Cleveland's workout, with bench coach Brad Mills standing nearby and offering him tips on tracking balls into the gap and chasing grounders into the corner, where he'll have to deal with the iconic ivy that's fading fast with winter approaching.

Francona said there was only one thing that would stop him from making the switch.

The Indians could play Coco Crisp or Brandon Guyer in left, but they don't hit like Santana. He hit 34 homers and drove in 99 runs during the regular season, and although he's hitless in six at-bats in the Series and batting just .179 in the postseason, Francona is confident the switch-hitter will warm up.

"He's a really good hitter," Francona said, adding he has spoken to Game 3 starter Josh Tomlin about playing Santana in left. "You can't run away from your guys at this time of year. If guys go oh-for the first two games, and you sit them, they'll never do well."

A former catcher, Santana has also played first and third and the Indians are certain he has the athleticism to handle left. But there's no way of knowing how he'll do until they put him out there.

"He's quick enough," Mills said. "And he can move enough. We've talked to him about seeing balls off the bat. We might have to play him maybe a little deeper or something along those lines, just to have him come in so reading the ball, he has more time to read the ball that way. Those things. When you haven't been out there, keeping that focus on there a lot of times is tough, but at least he's got the wall behind him."

Wearing a stocking cap as he sat in the warmth of the Indians' dugout on a chilly evening, Santana said he's ready for his new assignment.

"I'll be fine," he said. "Tito, he told me don't put on any pressure, play your game, play hard, stay focused and concentrate, and that's it."

The Indians don't have many other options, and first baseman Mike Napoli quickly removed himself from consideration despite playing 11 games in the outfield for Texas.