Injuries behind slow starts for Wild, Ducks -- while Carey Price has not been right for the Canadiens 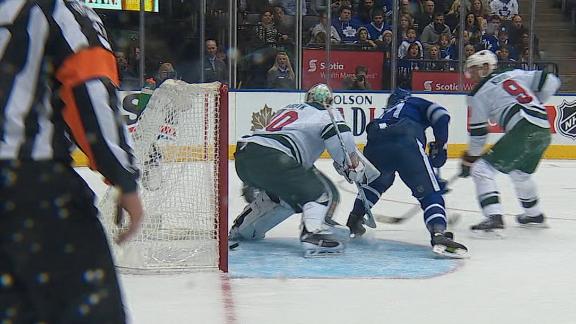 Which preseason playoff lock is in the deepest trouble?

Greg Wyshynski: Considering that Bruce Boudreau has spent just one season out of the postseason -- 2011-12, when he was fired in Washington and then hired in Anaheim -- it was safe to assume that the Minnesota Wild would make the Western Conference playoffs. Instead, the Wild have been humbled by injuries to players like Zach Parise, Nino Niederreiter and Charlie Coyle, and have stumbled to a 5-7-2 record.

They're giving up 3.07 goals per game, up from 2.51 for the 2016-17 season. They're the second-worst possession team in the league, at a 45.44 Corsi rating, having given up 101 more shot attempts than they've attempted themselves. They're playing not-good hockey.

There's still time to turn this thing around, as Minnesota gets healthy and as they hopeDevan Dubnykcan string togethera few good weeks. And again, note that Boudreau has only coached at a less-than-100-point pace just once in his career -- the year he was fired.

But, yeah, I'm not wild about what's happening with Minnesota early on this season.

Emily Kaplan: It's Nov. 9, and I'm beginning to worry about the Anaheim Ducks-- mainly, I'm worried that they won't be able to field an NHL roster by the end of the month. I'm definitely worried about their streak of five consecutive Pacific Division titles. At 6-6-3, Anaheim has yet to put together a winning streak of more than two games while ranking in the bottom third in the league in goals per game (2.80) and power play percentage (10.6).

Now captain Ryan Getzlaf, the first-line center who led the team with 73 points last season, is out for two months after undergoing surgery to repair his cheekbone. Oh, and goaltender John Gibson (my vote for the league's most underrated goalie) left Tuesday's game with an apparent head injury. Any team can handle two or three injuries, but now it's all piling up to the point where I wonder if this could be a lost season for the Ducks -- which would be a shame, because their championship window is narrowing. Getzlaf, winger Corey Perry and Kesler are all older than 32 and account for $23 million in cap space. After Getzlaf's injury, Ducks coach Randy Carlyle said, "There's no feeling sorry for yourself." I'm just sorry we might have to wait until next year to see if this team can get over the hump.

Chris Peters: The Montreal Canadiens are playing much better as a team lately, with wins in six of their last eight games. They're still outside of the playoff picture but moving up. And they're doing it mostly without the help of Carey Price, who has been nursing a lower-body injury.

Based on the way Price has played so far this year, it's not terribly surprising that the Habs are getting better results without him. It doesn't even seem right to type that sentence, but Price has simply not been good so far -- and that's a trend that cannot continue if this Montreal team is going to do anything this season.

Al Montoya and Charlie Lindgren have been fantastic in relief of Price as he remains sidelined. Price is 3-7-1 to start the season, with an .877 save percentage and 3.77 goals-against average. We've become accustomed to Price simply carrying the Habs no matter how they're playing.This is a guy who hasn't had a save percentage below .923 since 2012-13.

One would expect the former Vezina winner to bounce back at some point, but it's not a guarantee. Price hasn't been in this situation many times before, so it's hard to know how he'll pull out of it. Now that his team is playing a bit better in front of him, Montreal could still claw its way back into the playoff picture assuming Price gets it back together. If he doesn't, it's anyone's guess as to what happens with this club.