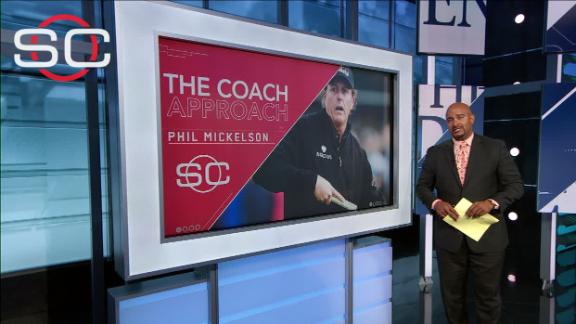 TROON, Scotland -- Like many golf fans around the world, Jack Nicklaus was riveted by the final round of The Open on Sunday. And he believes the play of winner Henrik Stenson and runner-up Phil Mickelson surpassed that of his famed encounter with Tom Watson known as the "Duel in the Sun."

"Our final round was really good," Nicklaus wrote on Facebook,"but theirs was even better."

Stenson matched a major championship record by shooting a 63, becoming only the second player to do so in the final round and win.

Mickelson, a five-time major champion who won the 2013 Open, stayed mostly shot for shot with Stenson until the end, his bogey-free 65 not enough.

Stenson, 40, became the first male Swedish golfer to win a major championship and moved to No. 5 in the Official World Golf Ranking.

Mickelson, 46, was bidding to become the fourth-oldest major winner and join Nick Faldo and Lee Trevino with six majors. His score of 267 was 11 strokes better than third-place J.B. Holmesandwould have won 140 of the 145 Opens played.

"Phil certainly has nothing to be ashamed of because he played wonderfully," Nicklaus wrote. "Henrik played well from the beginning to end. He drove the ball well; his iron game was great; his short game was wonderful; and his putting was great. Henrik was simply terrific.

"To win your first major championship is something special in and of itself, but to do in the fashion Henrik did it in, makes for something very special and incredible memorable. I'm proud of and happy for Henrik."

Nicklaus, 76, won The Open three times as part of his 18 major championships. But one of the more memorable tournaments was his 1977 loss to Watson at Turnberry, about 20 miles south of Royal Troon.

Grouped again for the final round, Watson shot 65 to Nicklaus' 66 in what is considered one of the sport's epic showdowns. Nicklaus finished 10 strokes ahead of Hubert Green, who famously quipped afterward: "I won the golf tournament. I don't know what game those other guys were playing."

Said Nicklaus on Sunday: "Some in the media have already tried to compare today's final round to 1977 at Turnberry, with Tom Watson and me in what they called the 'Duel in the Sun.' I thought we played great and had a wonderful match.