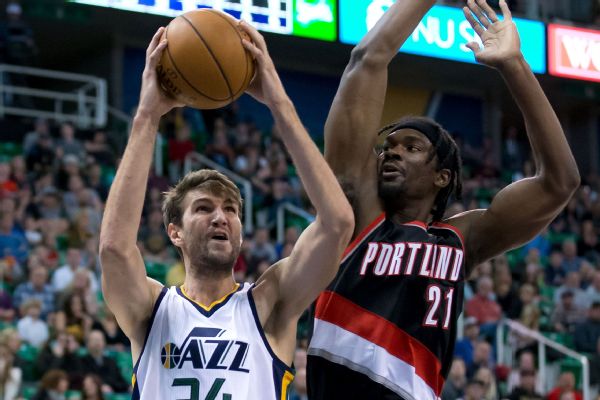 Utah Jazz reserve center Jeff Withey has been accused of domestic violence by his former fiancée, who filed a report with police in California.

"We are aware of the media reports involving Jeff Withey," the Jazz said in a statement released Thursday. "At this point, we are collecting information and will have no further comment until we have a better understanding of the situation."

TMZ reported that Kennedy Summers, a former Playboy Playmate whose engagement with Withey was broken off in October, made the allegations to the Manhattan Beach Police Department on Tuesday when the Jazz were in Los Angeles for their first-round series against the Clippers.

No charges have been filed in the case as of Thursday afternoon.

"Given the ongoing circumstances, our client now needs to protect herself and come forward about everything so this doesn't happen to her or others in the future," publicist Zack Teperman said in a statement, according to The Salt Lake Tribune.

Withey's attorney released a statement later Thursday saying the "salacious and patently false allegations appear to be nothing more than a vicious and calculated attempt by an angry former girlfriend to damage Mr. Withey's good reputation."

"It is no coincidence that these fabricated claims conveniently come during the middle of the NBA playoffs, or that TMZ and the police department were notified on the same day," Alan Jackson of Werksman Jackson Hathaway & Quinn in Los Angeles, said in the statement. "There is no truth to the accusations, and when the facts come to light we are confident that the falsity of the claims, and the true motivations of the person behind them, will be exposed."

Withey, 27, has played a bigger role than usual in the playoffs. Utah starting center Rudy Gobertwas injured on the opening possession of the series and has not played since because of a hyperextension and bone bruise of his left knee. He has been ruled out of Game 3.

Withey has averaged 2.5 points, 2.0 rebounds and 9 minutes during the first two games of the series. Coach Quin Snyder was noncommittal when asked about Withey's status for Friday's Game 3.