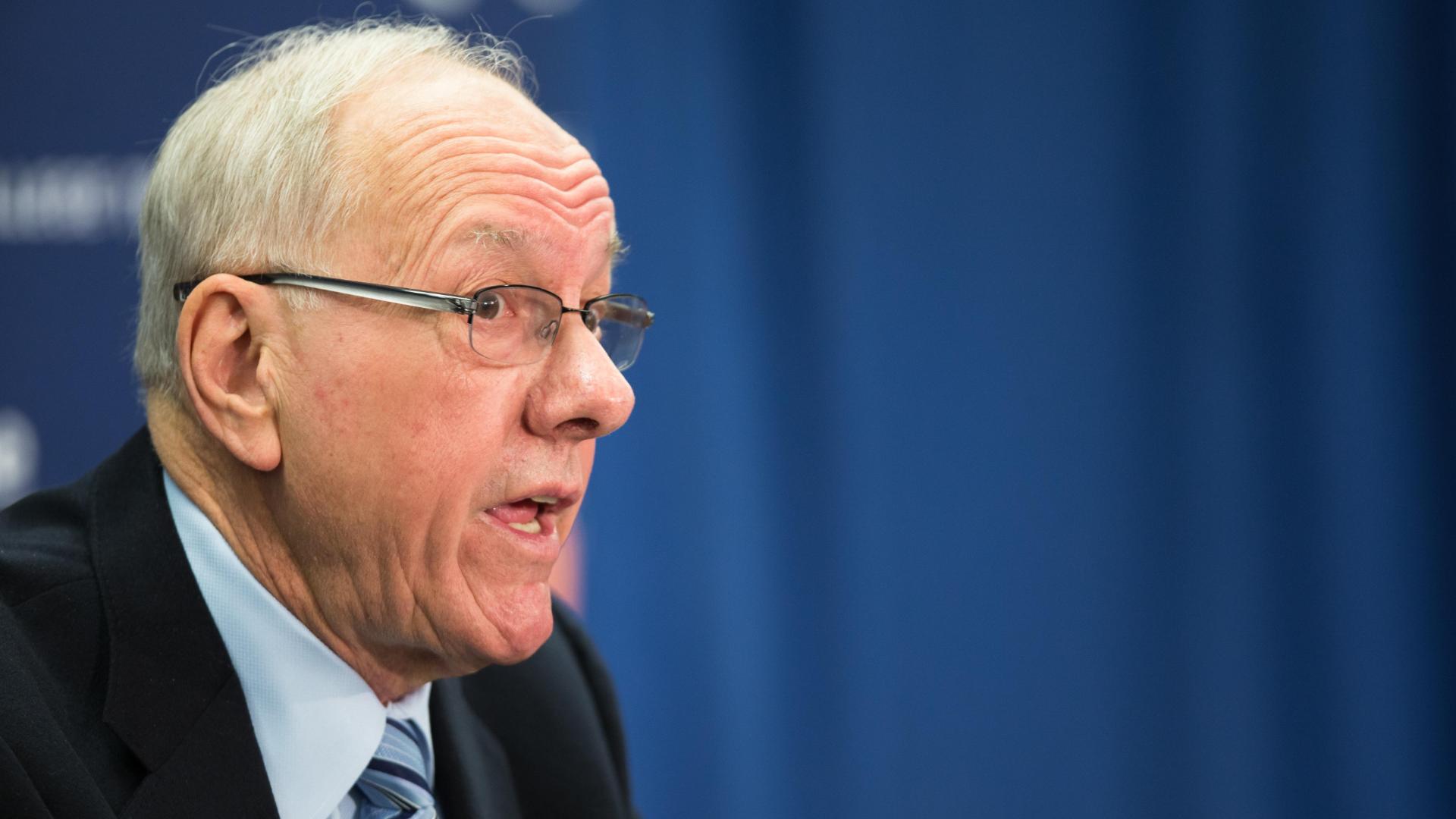 SYRACUSE, N.Y. -- Syracusecoach Jim Boeheim said Thursday that the NCAA sanctions imposed on him and his program for violations that occurred for more than a decade were "unduly harsh" and that he will appeal them.

Boeheim, who announced Wednesday that he would retire in three seasons, maintained that he did not have any "personal involvement" in findings outlined by the NCAA.

"Although the infractions report does not find that I had personal involvement in any violations of NCAA rules, the Committee on Infractions has asserted that for the past 10 years, I did not promote an atmosphere of compliance within the men's basketball program, and I did not monitor the activities regarding compliance of those within the program," Boeheim said, reading from a prepared statement.

"This could not be further from the truth. This is far from a program where student-athletes freely committed academic fraud. I believe the penalty is unduly harsh."

Boeheim confirmed that he discussed his plan with the university's chancellor to retire after three more seasons but that he will take things year by year.

Meanwhile, sophomores B.J. Johnson and Ron Pattersonwill be leaving the program and look to transfer elsewhere, multiple sources confirmed to ESPN on Thursday.

Patteron's AAU coach, Chris Hawkins, said the Indianapolis native would possibly look to move to a school closer to home.

"I love coaching, and you can coach as long as you can be effective," said Boeheim, head coach at his alma mater since 1976. "I thought I was effective this year. I don't think I was as good as I would have liked to have been, but I think I was effective. If I'm not effective at the end of next year, I won't coach after next year. The three-year thing is the outside."

On March 6, the NCAA suspended Boeheim for nine ACC games, took away 12 scholarships and ordered that 108 wins be vacated as a result of a multiyear investigation into the university's athletic programs. Penalties also included five years of probation and the vacating of 11 football victories from the 2004 to 2006 seasons.

The 94-page report by the NCAA Committee on Infractions said that the Syracuse support staff routinely accessed and sent emails from student-athletes' accounts, corresponded directly with professors and included attached course work to maintain the required grades for the student-athletes to remain eligible.

One of the focal points of the report was former center Fab Melo, a Brazilian who spoke English haltingly. In 2012, Melo was declared ineligible for the NCAA tournament days before it started. NCAA spokesman Erik Christianson said the university declared Melo ineligible.

Melo, who also missed three Big East games during the season because of an academic issue, had petitioned a professor for a grade change, a right that every Syracuse student has, to remain eligible.

Boeheim said Melo's eligibility was mischaracterized because people didn't think he could write the petition.

"Syracuse has never admitted somebody here in the basketball program since I've been here that could not do the work, that was not qualified," Boeheim said. "I think there's a little racism involved when they start talking about not taking this guy or that guy, he's from a foreign country. We shouldn't have foreign students at Syracuse University?"

The NCAA report also said basketball staff encouraged students to develop relationships with a booster, which led to more than $8,000 in improper payments to five athletes for volunteering at a local YMCA. The booster also paid basketball staff for appearances or assistance at YMCA events, payments that weren't reported properly.

Boeheim said he takes responsibility -- and apologizes -- for the actions of those under him.He also said his side of the story was "disregarded by enforcement staff" and insisted that he was declined a second interview by the NCAA concerning his involvement in the investigation.

The school had already self-imposed a postseason ban for its men's basketball team this season. The NCAA said the violations, which dated to 2001 and were self-reported by Syracuse, involved academic misconduct, extra benefits, failure to follow the drug-testing policy and impermissible booster activity.

"I'll take the punishment," Boeheim said. "Today what's important is to handle what I have to do here. I am 70 years old. It's obvious there's a time frame for me as head coach. I feel that three years is right for me. Three years is probably longer than I was planning. ...

"There's no way that I would ever run away from an investigation in progress. This investigation has made it imperative. This is the focus of my life."

Boeheim said retiring after his team reached the Final Four in 2012 would have been ideal, but the timing wasn't right.

The school's athletic director, Daryl Gross, is also stepping aside, immediately taking a marketing position with the school.

Longtime assistant coach Mike Hopkins, a former Orange star player, is in line to succeed Boeheim, but the final decision will be made by the chancellor.

"I believe Mike Hopkins will be a great coach, and I fervently hope that he is the coach here," Boeheim said.

Boeheim built his reputation over five decades as a player and a coach, revered for wins and delivering a national title to a struggling city in 2003.

"Given all these developments, it's right for the program [for me to stay]," Boeheim said. I've told every recruit I'm going to coach next year. If anybody's concerned about recruiting, I don't think that's an issue."

Boeheim has had problems before. The NCAA banned the Orange from the 1993 NCAA tournament for recruiting violations, and at the start of the 2011-12 season former associate head coach Bernie Fine was fired after two former ball boys accused him of molestation two decades earlier. Fine was never charged.

ESPN.com's Jeff Borzello and The Associated Press contributed to this report. 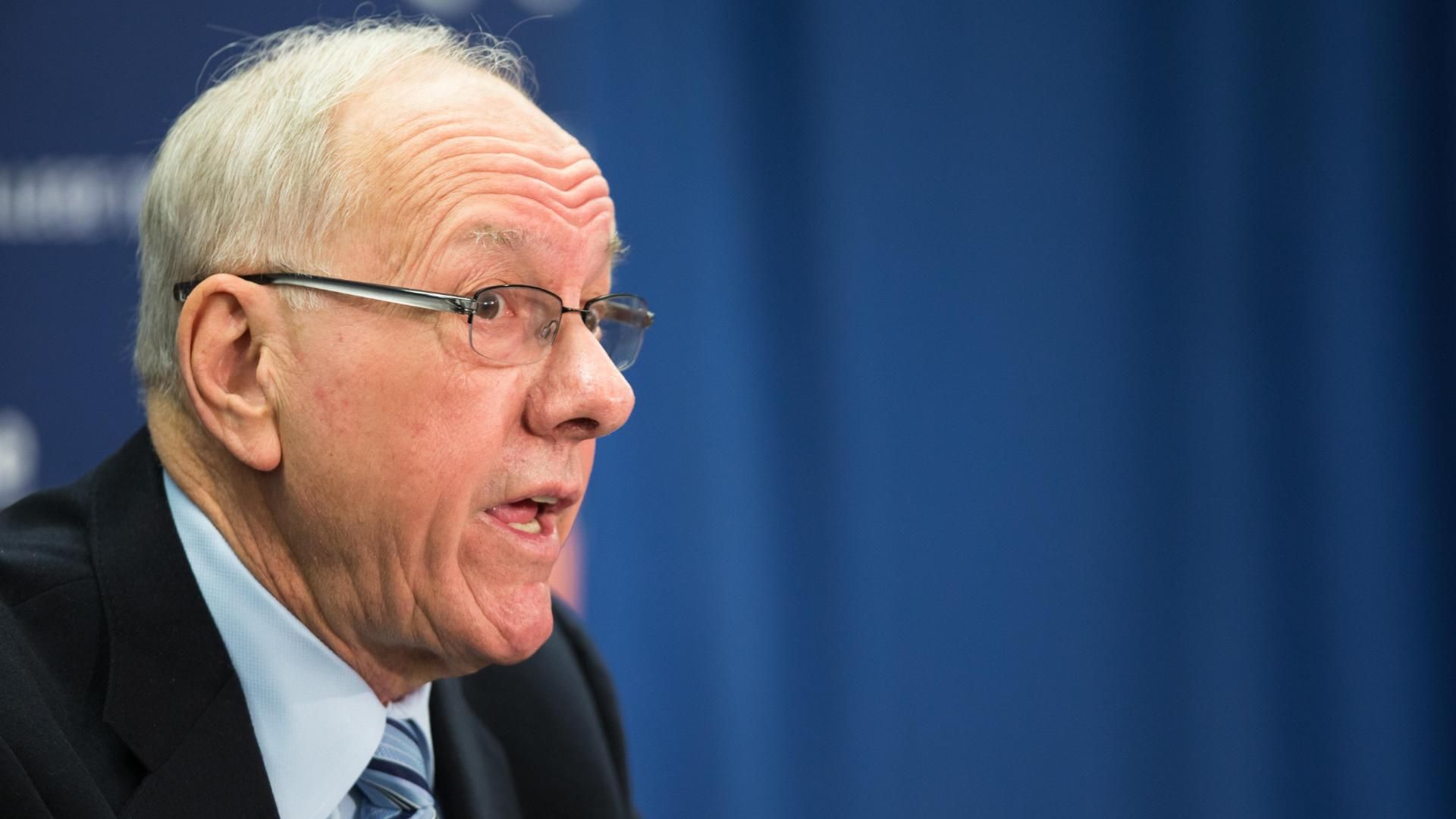 Boeheim Apologizes For Syracuse's Violations
Syracuse basketball coach Jim Boeheim takes responsibility for the conduct of individuals within the program, including those who violated NCAA rules, but asserts he had no personal involvement in any NCAA violations.

Vitale: Boeheim Not A Cheater
Dick Vitale reacts to Syracuse coach Jim Boeheim's news conference, in which Boeheim took responsibility for the conduct of individuals in the program but said the sanctions the NCAA imposed on him and the program are unduly harsh.

Boeheim On Retiring In Three Seasons
Syracuse coach Jim Boeheim discusses his decision to retire in three seasons and why that timeline is right for the program.

Jim Boeheim's Tone Defiant
Seth Greenberg reacts to Syracuse coach Jim Boeheim's news conference, in which Boeheim took responsibility for the conduct of individuals in the program but said the sanctions the NCAA imposed on him and the program are unduly harsh.