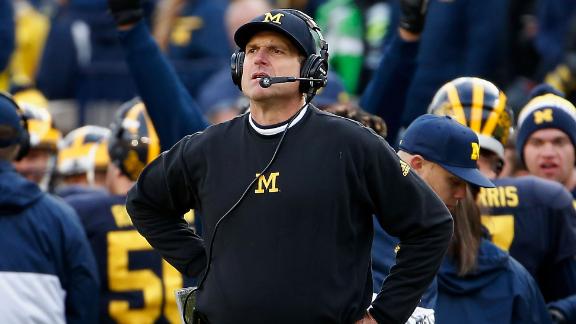 ANN ARBOR, Mich. -- Michigan coach Jim Harbaugh laid out the rules of his "meritocracy" recruiting philosophy Friday afternoon, responding to recent criticism about the rapid prospect turnover the football team has had in the weeks leading up to Wednesday's national signing day.

Harbaugh said his coaching staff expects recruits who verbally commit to the school early in the process to continue to perform up to standards in the classroom, on the field and in the community to keep their scholarship offers.

"We're very much out there. We don't hide how we operate and what we do," Harbaugh said while attending a news conference for new athletic director Warde Manuel on Friday. "It's a meritocracy with everything we do in our program. It's going to continue to be that."

In the past two weeks, two high school seniors who verbally committed to play at Michigan months or years earlier said the Wolverines coaching staff informed them that their offers were no longer guaranteed. Chicago-area prospect Erik Swenson told reporters that the rescinded scholarship offer was a surprise to him in early January.

NCAA rules prohibit Harbaugh or anyone at the university from commenting on specific recruits but asked whether he thought he was communicating openly and honestly with prospects throughout the process, Harbaugh said, "Yes."

Several prospects have announced their intentions to sign with the Wolverines in the past couple of weeks, presumably taking spots vacated by ousted players like Swenson.

Harbaugh said the recruiting process will continue in the same way until recruits are able to sign binding letters of intent Wednesday.