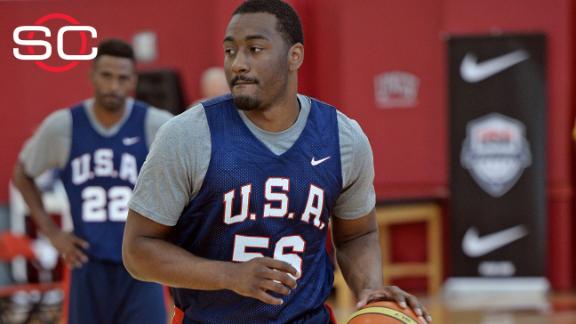 Washington Wizards point guard John Wall may have spent only one year in college, but he seems to have a firm understanding of Team USA's numbers game.

In predicting whether he'll be selected to USA Basketball's 2016 team for the Rio Olympics, Wall figures he'll be one of the odd men out.

Wall and the four players he listed ahead of himself were also joined by fellow point guards Mike Conley and Michael Carter-Williams as part of Team USA's minicamp last week. Typically, the U.S. has carried only three point guards on their rosters for international competition.

Wall said that even though he presumes he won't make the team, he enjoyed the experience and praised both USA Basketball architect Jerry Colangelo and coach Mike Krzyzewski.

"Great group of guys over there. Jerry Colangelo, Coach K. ... All those guys are great people," Wall said.

Despite that sentiment, he still isn't expecting a trip to Rio in 2016.

Though the network said Wall was fairly light-hearted during the conversation and joking about his assumed fate, he also said he intends to use the predicted slight to help motivate him.

"It's tough, but I've been overlooked my whole career. I'm used to it. Just more motivation and fuel to my fire," Wall said. "Going into this year, [Team USA] is an opportunity, but my main goal is focusing on the Washington Wizards."