Jordy Nelson out Sunday vs. Cowboys 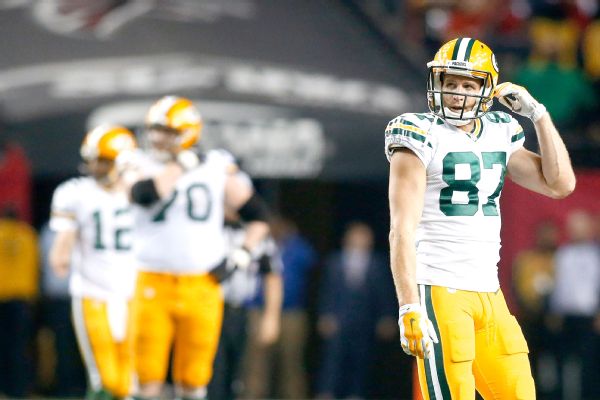 McCarthy said Friday that team doctors would not clear Nelson to practice.

Nelson spent one night in a Green Bay hospital for observation after he took a hard shot to the ribs from New York Giants safety Leon Hall in the second quarter of the Packers' 38-13 wild-card victory. Nelson was immediately doubled over in pain after the hit and had to be taken to the locker room on a cart.

McCarthy had hoped that Nelson would be able to practice Saturday, but after further evaluation, team physicians Dr. Pat McKenzie and Dr. John Gray would not let Nelson back on the field this week.

Even though he won't play Sunday, Nelson will travel with the team to Dallas, McCarthy said.

Asked if Nelson could play in the NFC Championship Game if the Packers move on, McCarthy said: "We'll re-evaluate Monday. He's actually in the training room now, going through a workout."

A source told ESPN that Nelson avoided a major internal injury, which is why he is being allowed to travel this week and has a chance to play next week if the Packers advance.

Earlier this week, quarterback Aaron Rodgers said he felt better about the Packers' offense without Nelson than he did last year, when his No. 1 receiver missed the entire season because of a torn ACL and the offense struggled.

"Obviously we feel better with 87 in the lineup," Rodgers said. "He's a classy guy and a great teammate. I was with him [Monday and Tuesday] night. He's staying positive, and he's hopeful. We're going to try to get this one and hopefully get him back if he can't play this week."

Geronimo Allison likely will move into the Packers' three-receiver set along with Davante Adams and Randall Cobb just like Allison did for the final two regular-season games when Cobb was sidelined with an ankle injury. In those two games, Allison caught eight passes for 157 yards and a touchdown.

"You just tilt opportunities the other way," McCarthy said Friday. "That's the way you always have to approach these types of situations, any time you have a player of his magnitude that's not available. That's all part of developing a game plan. You have to do that in the early stages of the week. We anticipated potentially not having him this week. So we'll be prepared for that."