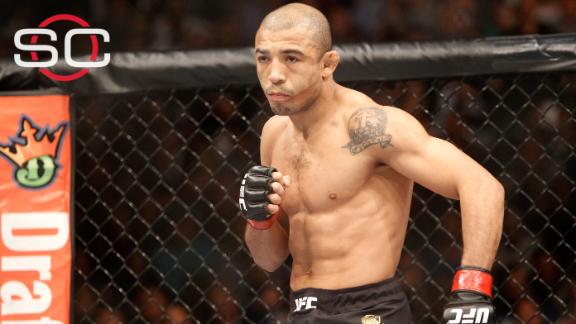 The longest reigning champion in UFC featherweight history has put his foot down.

Jose Aldo (25-2), who defended the UFC 145-pound championship seven times from 2011 to 2014, has publicly stated he will not accept any nontitle matchup at this point in his career. The 29-year-old surrendered his title to Conor McGregor in a 13-second knockout loss at UFC 194 on Dec. 12.

In an Instagram post, Aldo encouraged the promotion to "keep [its] word" and book him to a title fight. His only exception would be a rematch against McGregor (19-2) under any capacity.

"I was quiet for awhile because I was waiting for my rematch based on how the fight went down," Aldo wrote. "In fact, I was already training for it, but apparently I was wrong. So I wanted to make something clear to the UFC: For everything I have done, everything I have accepted and mostly how the fight ended, I will not accept any other fight other than a title shot.

"My only exception would be fighting [McGregor], at any time, anywhere, and once that he is afraid and knows that I'm gonna win."

McGregor has been booked to a lightweight title fight against Rafael dos Anjos (25-7) at UFC 196 on March 5 in Las Vegas. McGregor's 145-pound title will not be on the line.

Former UFC lightweight champion Frankie Edgar (20-4-1) is in a similar spot as Aldo. Edgar, 34, is on a five-fight win streak. His manager told ESPN.com that he also will not accept anything but a title fight.