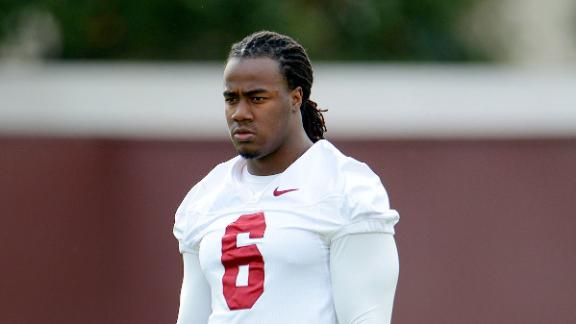 Shaw has been suspended indefinitely and was already expected to miss at least the first month of the season with a pair of high ankle sprains.

"Potentially," Sarkisian said when asked if Shaw could return to the team. "Sure."

Shaw said he suffered his injuries Saturday night after jumping from the second story of an apartment complex to save his 7-year-old nephew, who was struggling in the pool. Shaw said his nephew did not know how to swim.

He admitted to team officials Wednesday that the story was a complete fabrication.

Sarkisian, however, said Shaw did not tell them how he suffered the injury outside of "falling from a balcony" and was with his recently hired attorney, Donald Etra, when he spoke to him and school officials.

"He was unable to tell us," Sarkisian said. "When he actually admitted to us that he was lying, he was in the presence of his attorney. That's a better question for his attorney. He didn't tell us and we weren't privy to ask quite honestly."

Etra said Wednesday that Shaw's injury was suffered while falling off the balcony at the Orsini Apartments in downtown Los Angeles on Saturday night.

"My understanding is that there is nothing criminal about this whatsoever," Etra told ESPNLosAngeles.com. "There is no criminal activity whatsoever."

Officer Jane Kim of the Los Angeles Police Department said Wednesday night that Josh Shaw was mentioned -- but not as a suspect -- in a report involving a Saturday night break-in at a downtown apartment building.

A source told ESPNLA.com that witnesses told police an individual matching Shaw's description was seen jumping off of a third-story balcony at the Orsini Apartments near USC's campus where Shaw's girlfriend lives.

Sarkisian said he believed Shaw when he told him how he was hurt and had no reason to doubt the fifth-year senior, who was named a team captain last week.

"We're obviously disappointed," Sarkisian said. "We're held to a very high standard here at USC. I've known Josh Shaw for six years, when I first started to recruit him. Since I've gotten here, everyone spoke glowingly of him that has worked with him over the last few years here.

"Obviously we thought very highly of him. He spoke at our commencement this past spring. So when he came to us with the story, I didn't have a reason not to believe this guy. I believe that's where the level of disappointment kicks in.

Sarkisian said he issued an indefinite suspension because there are still pending investigations by authorities inside of and outside of the university.

"We're still in holding; it's still ongoing," Sarkisian said. "I don't think it would be fair to put an exact time frame on it until we know everything as it comes through. There are different authorities on campus and off campus looking at some stuff. I don't know yet."

Sarkisian said the decision to post Shaw's heroic story on the school's official website on Monday was a group decision and one that he regrets and takes blame for.

"It's an unfortunate situation. We regret the fact that we released that article," Sarkisian said. "It has as much to do with me as anybody else. Moving forward, we'll be a little more patient.

"The last thing we needed was Josh Shaw rolling around in a wheelchair and everybody saying, 'What happened?' We tried to get in front of it and it didn't work out for us. It's disappointing but we will always continue to support Josh in his efforts. He's a Trojan. He made a mistake, which kids make, but we have to be here for him and help him to get better."