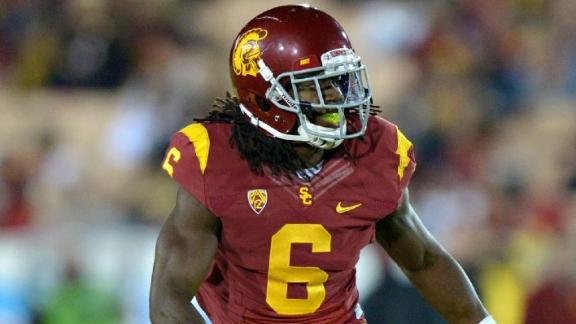 LOS ANGELES -- USC football coach Steve Sarkisian said the school has received several calls questioning the authenticity of Josh Shaw's story about saving his nephew from potentially drowning and is investigating the matter.

Shaw said he suffered a pair of high ankle sprains Saturday night after jumping from the second story of an apartment complex to save his 7-year-old nephew, who was struggling in the pool. Shaw said his nephew did not know how to swim.

"Josh Shaw, first and foremost, is a good person and a good kid," Sarkisian said after Tuesday's practice. "He came to us with what had occurred Saturday night, and I have no reason and no history to not believe Josh and his story and what has occurred. Within the last few hours or so, we've gotten a few phone calls contradicting what Josh said occurred Saturday night, so we're going to continue to vet. We're looking at it. Beyond that, I only know what I know. Josh is adamant with what occurred, and we'll continue to vet some of the other stories that have come across our desk and our phones and see where we can go from there."

When Sarkisian was asked who had called and made him second-guess Shaw's story, he said, "I don't want to get into who's calling us. I'd just appreciate it if you guys gave us some time to vet it and look into it so that we can give you a real solid answer instead of more hearsay and what might have or what might not have occurred."

Multiple sources told ESPNLA.com that school officials were skeptical of Shaw's story before releasing a statement about it along with quotes from Shaw and Sarkisian on Monday. Their skepticism grew larger by Tuesday as the story gained steam and multiple media outlets wanted to talk to Shaw, the 7-year-old nephew he rescued and family members who were at the party.

Lt. Andy Neiman of the Los Angeles Police Department also said Tuesday afternoon that a man named Joshua Shaw was mentioned -- but not as a suspect -- in a report involving a Saturday night break-in at a downtown apartment building.

"I'm not surprised," Sarkisian said when asked about the contradictory phone calls he received. "I get calls on a lot of different things. We have to do our due diligence and vet everything, and we'll handle it internally. We'll see what happens with this one and move forward and give you guys an update."

Shaw was not available to the media, nor will he be until USC officials find out exactly what happened, Sarkisian said.

"Josh won't be available until we find out," Sarkisian said. "I just don't want to put him in a situation of answering questions that we really don't have all the answers to."

The one aspect of Shaw's injury Sarkisian could confirm was that the cornerback did suffer two high ankle sprains and would be out indefinitely.

"I will say the X-rays and MRIs we have taken on him have come back negative," Sarksian said. "So far we don't see anything structurally wrong with him but he is very sore."

Sarkisian said he wanted to put the situation behind him but wanted to get all the facts straight first.

A transfer from Florida, Shaw has six interceptions in two seasons at USC. He was voted a team captain last weekend and is expected to be a major part of the Trojans secondary after starting all 14 games in 2013.