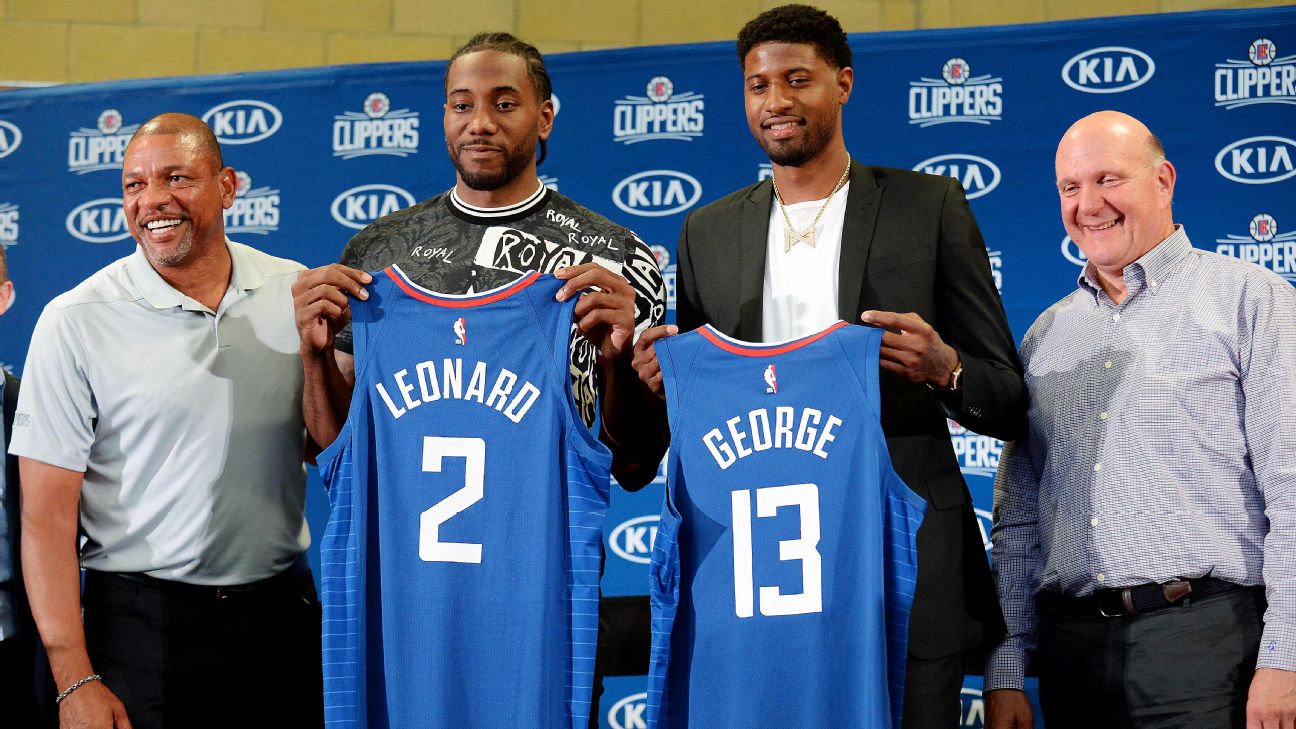 LOS ANGELES -- Throughout Kawhi Leonard's free agency, we heard and talked a lot about his desire for secrecy and discretion in his negotiations. The three teams involved mostly abided by those wishes, lest they risk losing the two-time NBA Finals MVP over a careless leak or slipup.

But on the night of July 5, before the news broke that Leonard had committed to the LA Clippers-- with whomhe'd be joined by forward Paul Georgeafter the Clippers acquired him in a trade with the Oklahoma City Thunder-- a major breach occurred.

Clippers coach Doc Rivers was at dinner at Nobu, an upscale sushi restaurant in Malibu, with a group of friends. He'd been told to stay close to his phone all night, knowing the deals for George and Leonard were close. But watching his phone for updates was torture and, in Rivers' mind, possibly a jinx. So he put it out of his mind and tried to enjoy his night.

Finally, the text from Lawrence Frank, the Clippers' president of basketball operations, came in: "It's done. Call me as soon as you can."

Rivers was in a very public setting, but they're used to protecting celebrities at a place such as Nobu. He stepped outside to call Frank, escorted by a security guard.

"I remember going, like, 'Yessss!'" Rivers said. "And the security guard was like, 'I got a feeling I know what that 'yes' is about.'"

Rivers looked around to see if anyone else was eyeing him and connecting the dots on why he was so excited. The security guard smiled. Rivers laughed, knowing the security guard had figured out that the Clippers had landed Leonard but not wanting to confirm anything and break the first rule of Kawhi Club.

"And then he was like, 'Yeah, I'm sure of it,'" Rivers recalled. "I couldn't even acknowledge him. He was laughing. I was laughing."

Shortly thereafter, the rest of the NBA world knew why. The Clippers not only landed Leonard; they got George too. That's two seismic moves that figure to alter the league for years to come.

Rivers called it "a movement" at the introductory media conference the Clippers held for Leonard and George on Wednesday. If the Clippers make good on the enormous promise they have now, it certainly will be a defining moment -- or movement -- for a franchise that has never won a championship.

But Rivers has been in this place before -- the media conference at which everyone is excited about possibilities and potential. He came to Los Angeles in 2013 with a media conference like this as the purported missing piece for the "Lob City" era of the Clippers.

That group -- with Chris Paul, Blake Griffin and DeAndre Jordan -- never bore fruit, which makes this something of a do-over for Rivers.

"I never think you start over," he said. "I don't think you get to. I think you go through stuff, and you learn from it and keep going.

"So I view this as another opportunity to win it. And let's be honest: You don't have a lot of opportunities to actually win it. When you have that, you take advantage of it."

Rivers said he will go on vacation for a bit before he starts to figure out how to take advantage of the opportunity this group has.

But if there's one thing he has learned -- or one regret from the Lob City era he'd like to make right -- it's impressing a sense of urgency upon this group.

"I never felt like I could get that group [the Lob City group] to understand that this was their time, the urgency of it," Rivers said. "When we beat Golden State [in the 2013-14 playoffs], that following year, Golden State decided this was their time. I don't think we decided that. We just showed up and wanted to try to win. But that's not enough."

In Boston, where Rivers won a championship in 2008 with Kevin Garnett, Ray Allen and Paul Pierce, the coach got that buy-in and willingness to sacrifice.

"Sometimes you have to be at the right time of a player's life for them to want to win," he said. "Everyone says they want to win. It's B.S. Most people want to win as long as they can do whatever they want to do. Everything has to be perfect for them. But you have to sacrifice something to win. That group [in Boston] understood that. It was time for Ray and Paul and Kevin to win because they'd each had the individual success."

The only question was how long it would take for that group to come together.

"When we got together everyone said, 'Well, they won't win it this year. They'll win it next year,'" Rivers said. "I remember giving this speech, 'Next year? Next year we're older. Next year you could be injured. Next year could be anything. This is your time.'"

It's too soon to say how this Clippers group will fare. Rivers is still getting to know his two new superstars. Last week, he visited with Leonard and his family at Leonard's house in northern San Diego County.

"We talked basketball for two hours, three hours. I met some other people that he works with," Rivers said. "We went over a lot of stuff, especially offensively.

"But I don't know Kawhi yet. We're learning each other. The two things that have stood out for so far -- and he actually did it again when he was up on stage, where he talked about, 'It's not just us two, all 15 have to buy into their role' -- is his understanding of accepting roles.

Rivers hasn't yet met with George to take his temperature. They were supposed to have dinner this week, but house-hunting and family obligations got in the way. But they will connect and then reconnect all season long, Rivers said.

"You have to build trust with everyone," he said. "I always use this word: re-trust. You always have to build re-trust with the guys you have. It never stops, the trust thing."

That's why it was important to keep things quiet during the free-agency period and start earning Leonard's trust.

And that's why Wednesday's ceremonial introduction felt like a lesson learned, rather than déj vu.

"This group is new. This is our creation. I feel like that college coach, when you first get the job and you take all the recruits that are there and try to win with them. And then you get your recruits. That's how I feel. This is our team. ... And we feel really good about it." 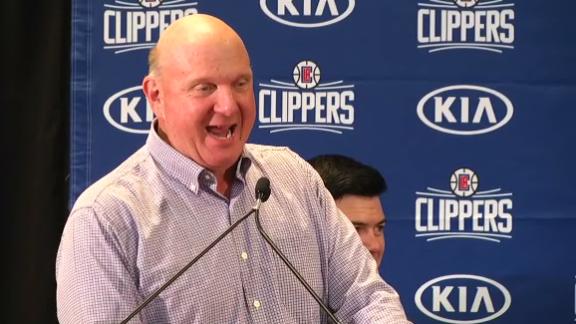 Ballmer: It's all about the 'Larry O'B'
Steve Ballmer riles up the crowd at the Kawhi Leonard-Paul George press conference, demanding a standing ovation while discussing his desire for a title. 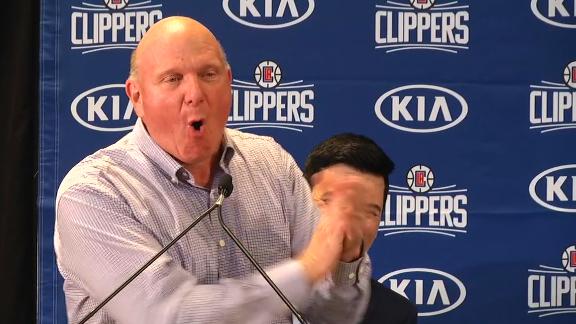 Ballmer fired up about Kawhi, PG-13
Steve Ballmer's enthusiasm couldn't be contained when discussing Kawhi Leonard and Paul George playing for the Clippers. 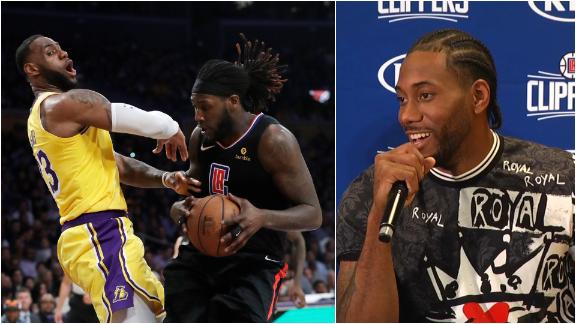 Kawhi on LA rivalry: 'The Clippers have been better'
After being asked about the rivalry between the Lakers and the Clippers, Kawhi Leonard says in the past few years the Clippers have been the better team.
Report a correction or typo
Related topics:
sportsespnsteve ballmerpaul georgekawhi leonardla clippersdoc riversnba
Copyright © 2020 ESPN Internet Ventures. All rights reserved.
More Videos
From CNN Newsource affiliates
TOP STORIES