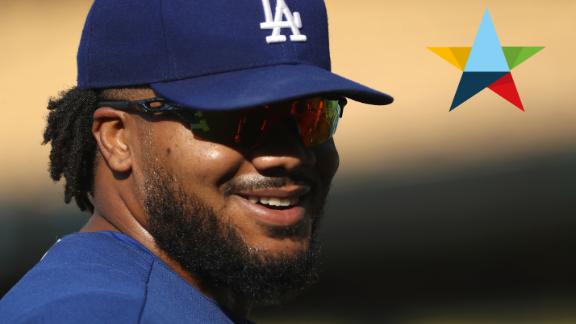 This interview was conducted in Spanish and has been translated. Read it in Spanish here.

Kenley Jansen was born and raised in Curacao. But after learning four languages, including Spanish, in school as a child, he has become a bridge between Latino and American players in his eight years in the majors. Jansen tells Marly Rivera how his experiences helped his transitions to the majors and his relationships with teammates and coaches.

On many of the islands, as it is in your island of Curacao, children grow up speaking several languages. Was it like that for you?

In the islands, people speak four or five languages. That's something we start in school. You start with Dutch first, and then, I think, when you go into third grade, you start with English and then Spanish and Papiamento (the official language of Curacao) and everything. Then, when you are around 15 years old, you start talking in French and everything.

Xander Bogaerts, who is from Aruba, also speaks Spanish well, and even has a Dominican accent.

You know, I always thought he was Dominican! I mean, just listen to him talking, and it's like, man. He's a little younger than I am. I didn't get to know him. Guys like Andrelton Simmons I kind of know because they were there when I was there. When I [got to] know him, I was kind of like, "Wow, he's from Aruba, that's awesome."

What is your first language?

In the minors, there are not many players from the islands, but there are many Latinos. Did people assume that you were Latin?

Sure, a lot of people thought I was Latino because all the time I was hanging out with Latinos. They would talk to me and I would learn how to speak [like them]. I can speak with guys from the Dominican Republic or from Venezuela or from Mexico. I wanted to talk almost the same as them and always learn more languages.

How did it help you, to speak so many languages, when you were in the minors?


It was easier for me. I know a lot more people, and I know [more about] the game. All of that helps because there are times when you have Latin coaches. If you have a Latin pitching coach, you can speak Spanish with them and you learn more; he can tell you what you have to do on the mound.

How did you decide which language to speak at home with your children?

Well, with my son, he speaks English now because I want him to learn English. With my wife, she talks to me in Papiamento. He listens to us to talk to each other all the time in Papiamento, and when my family comes [from Curacao], they speak Papiamento with him. We have [a lady] who works in my house, and she speaks Spanish with him, and so my son is learning all three languages.

Did you see yourself as a bridge between Latinos and U.S. players, especially as a translator?

Yeah, I definitely was the bridge to do it sometimes. Sometimes, when they have no one to translate, I just go in and help some Hispanic guys.

Tell me about your relationship with Yasiel Puig.

I am telling you right now, the Yasiel Puig that everybody sees outside is not that. He is just a great guy; a fun guy [with a] great heart. That's who he is. That's his personality. He is still learning what's right to do around here or what's not right. He is just learning the culture of the United States, I feel. Sometimes, I feel like us as Latinos kind of complicates stuff a little bit. People from here kind of see it differently. And I feel like with Yasiel, it was the past, too, that a lot of stuff could have gone differently for him. Since the beginning, he could have been better; he could have worked harder. He could have [been more] disciplined.

Now that we have other people around here, he is really well disciplined. Like I said, Yasiel is gifted. A talent like that, I never saw before. I am serious. I never saw Bo Jackson play, and I heard Bo Jackson was amazing. But for me, in my eyes, a talent like that, you can tell this kid is so gifted. The way how he plays the outfield. The arm he has; his hitting ability. He has so much in him that he just has to get to know himself to be on that other level. He is not there yet, but I hope one day he just gets it, and he will get to that level.

I have heard that you did not start as a pitcher. What other positions have you played?

Well, you know, it's true. I started at 6 years old playing [in my hometown]. I remember watching my brothers growing up playing baseball and I wanted to do the same thing. I started playing the outfield first to get used to it. Then I went to shortstop -- and a guy named Andrelton Simmons shows up [and] I moved to third base. We played with each other. He played shortstop, and then I was at third, and then I moved to first. Then, I finally become a catcher.

How tall were you when they switched you to being a catcher?

The transition from catcher to pitcher -- had to be that arm.

Yes, it would definitely be the arm. I remember in the World Baseball Classic [in 2009], throwing out Willy Taveras at third in Puerto Rico. And then I showed how I could throw from my knees, throwing Ryan Braun out from my knees. And they see that. I had been doing that more in the minor leagues. That made the Dodgers make that decision to, you know, let's just put him on the mound.

Did you ever think, when you made the transition to become a pitcher, that you would become a franchise closer?

No, I never thought that would ever happen. When I started pitching [due to] De JonWatson, who used to be the farm manager here and now is a scouting director, I never thought that could happen. I knew that I had a chance to make it to the big leagues, [because even] when I did not know how to pitch, I threw 10 pitches in Single A [advanced] and struck out two batters. I said, 'OK, you have a chance to make it to the big leagues, let's see how it goes.' From then on, things went well, and then, when I got here, all these things happened so fast. I still can't think of myself as a closer for the Los Angeles Dodgers franchise.