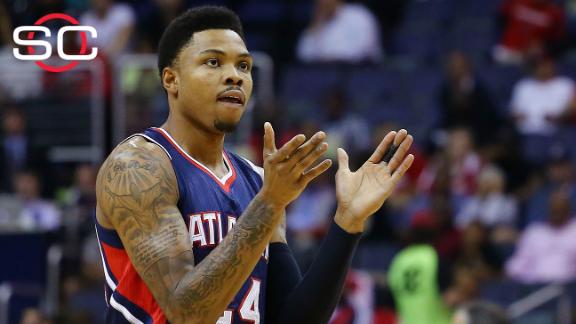 CLEVELAND -- Hawks guard Kent Bazemore will start in place of the injured Kyle Korver in Game 3 of the Eastern Conference finals Sunday night against the Cleveland Cavaliers.

He also stood by his comments that the Hawks were the better team despite the fact Atlanta trails the Cavaliers 2-0 in the best-of-seven series with the next two games at Quicken Loans Arena in Cleveland.

Following the Hawks' loss Friday night, Bazemore told the media that he still believes the Hawks are the better team. He wasn't backing down on Sunday morning at the team's shootaround.

"I've been believing all season," Bazemore said. "I'm a very optimistic person at the end of the day, and I believe in my teammates. I'm a realist at the end of the day as well, but I still think we haven't played our best basketball. So we're going to try to come out tonight and do just that."

Korver, who will miss the remainder of the postseason, suffered a severe high ankle in the third quarter Friday of Atlanta's 94-82 loss in Game 2, when Cavaliers guard Matthew Dellavedova rolled into him while the two players were pursuing a loose ball.

Korver and Bazemore have contrasting skill sets. While the Korver led the league in true shooting percentage of 69.9 this season, Bazemore's most highly regarded assets are his defensive energy, speed and athleticism.

"[Bazemore] has been attacking, driving, getting to the basket well," Hawks coach Mike Budenholzer said. "As the playoffs have gone on, he's kind of gotten a better feel and sense for when to attack. So he'll do that. I think he's gained so much confidence in his shot and corner 3s. We want him to shoot when he's open, and be aggressive and attack. And he's learning to find teammates. Kent's just got to be Kent."

Bazemore, who went undrafted in 2012 out of Old Dominion University, was a 36.4 percent shooter from behind the 3-point arc this season, but has converted only 4 of 21 attempts this postseason.

The five-man unit consisting of Bazemore and Jeff Teague, DeMarre Carroll, Paul Millsap and Al Horford that will start for Atlanta in Game 3 logged only 61 minutes together in the regular season, and outscored opponents by 3.4 points per 100 possessions, less than the 8.1 margin posted by the regular starting lineup that featured Korver at the shooting guard spot.

In the postseason, the unit has been outscored 14-13 in only six minutes of action together.

Bazemore was slated to start Game 2 for Carroll, who sustained a left knee sprain in Game 1, and was a gametime decision. Carroll ultimately played, though his production was limited to six points and three rebounds in 34 minutes.

Budenholzer said on Sunday he was encouraged by Carroll headed into Game 3, given the extent of the injury.

"I don't know that any player is perfect right now, but I think DeMarre is in a pretty good place physically," Budenholzer said. "At least that's the feedback he gives me and all of us."

On Sunday, Carroll affirmed his coach's impressions and reiterated his belief that an appearance in a conference finals series is too precious to pass up if he's able to take the floor, even in a limited capacity.

"I'm standing here," Carroll said when asked how he was faring physically. "I put myself out there to help my team, whatever it takes. I know my knee is nowhere near 100 [percent]. At the end of the day, if I get out there, I'm going to give it my all and hopefully my team has my back."

Bazemore replaces Korver in starting lineup
Hawks guard Kent Bazemore talks about starting in place of the injured Kyle Korver and how Atlanta can create offense in Game 3 against the Cavaliers.