ESPN
By Baxter Holmes
LOS ANGELES -- On stage, Shaquille O'Neal and Kobe Bryant sat side by side, wearing suits and smiles, whispering in each other's ears and laughing. They praised each other, embraced multiple times and spoke so fondly of championships won just a decade and a half ago.

In all, they looked like old friends, not like former teammates whose bitter feud split apart one of the most dominant NBA duos in history.

The Los Angeles Lakers icons reunited Friday as a 1,500-pound bronze statue depicting O'Neal dunking was unveiled at Star Plaza outside Staples Center, where O'Neal and Bryant won three consecutive titles together in the early 2000s.

"Some people thought the odds of Kobe Bryant showing up today were the same as Shaq sinking a free throw," Lakers legend Kareem Abdul-Jabbar said.

O'Neal said afterward that it "meant a lot" that Bryant attended the event, which featured many Lakers icons, including their ex-Lakers coach, Phil Jackson, former Lakers player and executive Jerry West, guard Elgin Baylor, Abdul-Jabbar and many of O'Neal's former teammates.

"Definitely couldn't have done it without him," O'Neal said, speaking of Bryant. "We will always go down in history as the most enigmatic, controversial, dominant one-two punch ever created."

Of the seven speakers on stage, Bryant was one of the last to address the crowd -- just before O'Neal's children and then O'Neal. The legendary Lakers guard, who retired last April after 20 seasons with the team, called O'Neal "the most dominant player I've ever seen" and recalled that while the jovial O'Neal liked to joke around, he also had a competitive side that emerged whenever he stepped onto the court.

Bryant cited a 2001 playoff series against the San Antonio Spurs, and before the first game, O'Neal turned to Bryant and asked that he give him the ball early in the game. Bryant asked why.

"When I was a kid, [Spurs center] David Robinson wasn't very nice to me," O'Neal responded.

Bryant said he knew then that the Lakers would sweep the Spurs -- and they did.

Bryant thanked O'Neal, telling him that he learned so much from him as a player, and then he thanked him for everything he'd done for the Lakers and the city of Los Angeles. Bryant then turned to O'Neal's children, who were seated in the front row of a star-studded crowd.

"Your dad was a baaaaad man," Bryant told them. "A bad man."

O'Neal thanked many involved with the Lakers but didn't mention Bryant until toward the end, just before O'Neal thanked the fans.

"We pushed each other," O'Neal said. "We had our battles, had our times, but we always had respect for each other and won three championships."

O'Neal then told the fans that he heard them whenever he missed a free throw or didn't play with effort, and he said he appreciated them always staying on him.

And then he bellowed into the microphone: 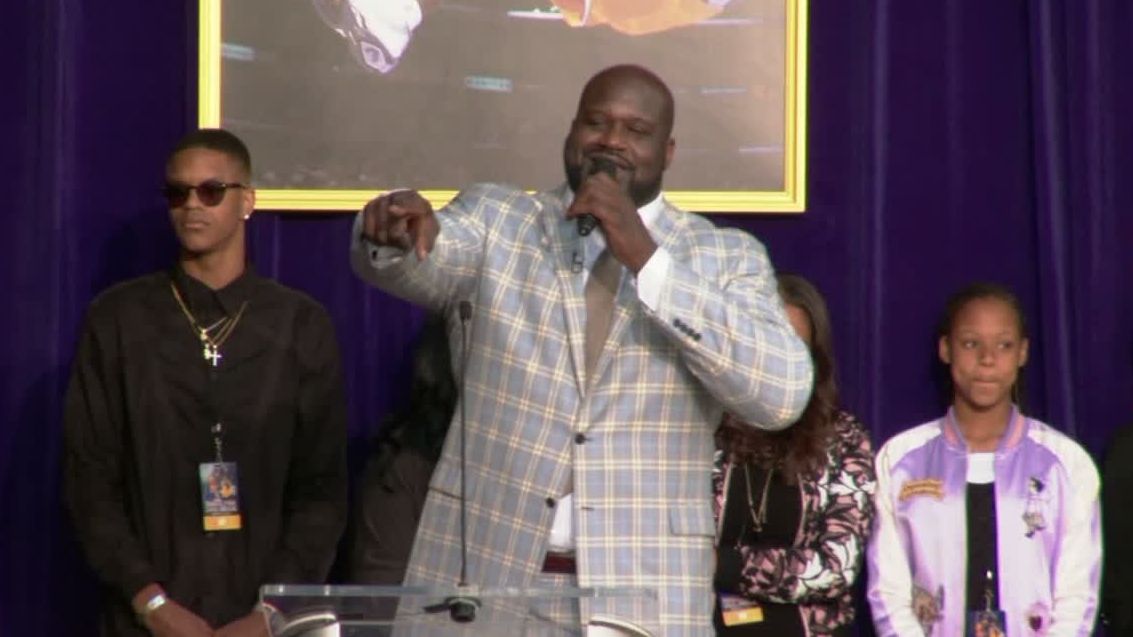