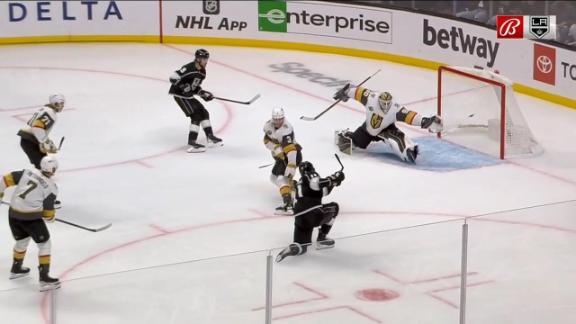 LOS ANGELES -- - The Los Angeles Kings are hoping that some of their young players step to the forefront to help end a three-year postseason drought. But on opening night, it was the veteran standouts from the franchise's two Stanley Cup title runs that led the way.

Anze Kopitar had the Kings' third hat trick in an opener and two assists, and Drew Doughty added a goal and three assists in Los Angeles' 6-2 victory over the Vegas Golden Knights on Thursday night.


Kopitar set a franchise record with five points in an opener. The last time Los Angeles had a hat trick in its first game was Jari Kurri in 1991. Luc Robitaille had the first in 1988.

"I mean, you just try to stay in the moment, really. You don't think about that too much. I mean, just play," said Kopitar, who also tied a career high with five points. "Like I said, it's the first game of the season, so first and foremost, we wanted to get off to a good start and get the two points in the bank and just kind of go from there."

Vegas - which defeated expansion Seattle in its opener on Tuesday - lost captain Mark Stone to a lower-body injury less than 8 minutes into the second period. Stone hunched over in pain near the boards after taking a shot near the Kings' goal and barely made it back to the bench before being helped to the locker room.

Golden Knights coach Pete DeBoer did not have an update on what appeared to be a lower-body injury to Stone.

Shea Theodore and Chandler Stephenson scored for Vegas. Robin Lehner gave up four goals on 31 shots in the first two periods before Laurent Brossoit came on for the final 20 minutes, allowing a pair of goals on 16 shots.


"I wouldn't put this on the defense. I would put on the whole team. That's the worst game I've seen since I got here. Opening night for them doesn't really matter," Lehner said. "For the second game of the season, this should be a red flag for us, and we have five days to look at this and fix it."

Kopitar gave Los Angeles a 2-1 lead on a power-play goal with 43 seconds remaining in the first period on a wrist shot from just outside the right faceoff circle. He then extended the lead to 4-1 midway through the second period on a one-timer after getting the feed from Adrian Kempe.

The Kings' captain then completed the fifth hat trick of his career 15 minutes into the third period when he took the pass from Viktor Arvidsson, cut back and put a backhand into the net to make it 6-1.

Doughty had an assist on the first three goals before ripping a slap shot near the point on the power play early in the third period to give Los Angeles a 5-1 advantage.

"I know we're getting older, whatever you want to say, but we're still driven," said Doughty, whose four points are the most by a Kings' defenseman in an opener. "We want to win again. That's all we care about and we go out there and lead by example and play our butts off, and that's what we're going to do every night."

Theodore opened the scoring nine minutes into the game with a slap shot from the right point that trickled underneath Peterson's pads.

Brown knocked in his own rebound four minutes later to even it at 1-1. Lehner stopped Brown's wrist shot with his left leg pad, but the puck bounced back to Brown, who was able to knock it in the second time.


"They were faster than us. We were too slow to close and giving them too much time," Vegas forward Riley Smith said. "When you do that it doesn't matter who you're playing, you are going to make them look good in this league. They were the much better team tonight."

Stephenson's goal late in the third was his second of the year and his third point in the young season.