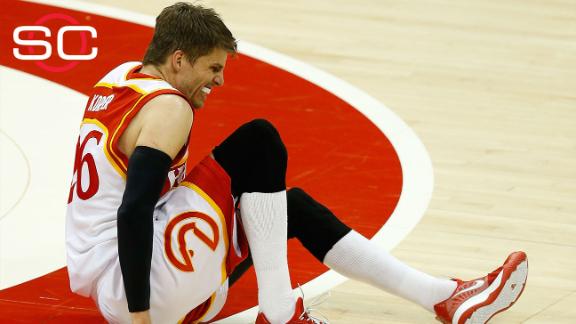 ATLANTA -- Hawks shooting guard Kyle Korver will miss the remainder of the postseason after being diagnosed with a severe right ankle sprain.

The Hawks announced they would be without Korver after an MRI on Saturday confirmed the injury. He will visit a foot and ankle specialist to determine the best course of treatment.

"Obviously, it's very, very unfortunate for Kyle," Hawks coach Mike Budenholzer said. "He's such a big part of what we do. But there will be other people who will get opportunities. We expect to compete and get after it tomorrow in Game 3. I don't think anybody is going to feel sorry for us."

Korver injured the ankle in the third quarter Friday of Atlanta's 94-82 loss to the Cleveland Cavaliers in Game 2 of the Eastern Conference finals.

The first-time All-Star suffered the injury when Cavaliers guard Matthew Dellavedova rolled into him while the two players were pursuing a loose ball.

"Injuries are such a big part of our league and a big part of the playoffs," Budenholzer said. "Everyone has to deal with them, and we're not any different. Of course you'd love to have everybody healthy and have your whole team and be at full speed. That's the ideal, but you can't spend too much time or frustration thinking about it, concerned about it. You've got to get your mind right. You've got to get your mind focused. The guys that are healthy, the guys that are available get ready to compete, get ready to get after it and go play a basketball game."

The league leader in true shooting percentage at 69.9, Korver had his most productive season since being chosen late in the second round of the 2003 NBA draft. For much of the season, he maintained a 3-point shooting clip above 50 percent. He finished the season at 49.2 percent from beyond the arc with an average of 2.9 made 3-pointers per game, trailing only Stephen Curry and Klay Thompson.

But Korver's production had dropped in the postseason, as the Hawks' opponents schemed to reduce his shot attempts. A spot-up shooter who generally requires multiple screens from teammates to get open, Korver has been pursued doggedly by his primary defenders throughout the playoffs and often encounters a second defender hedging on the other side of the screen.

Hawks forward DeMarre Carroll was a surprise starter in Game 2 after crumpling to the floor in Game 1 with a left knee sprain. Carroll entered Philips Arena with a limp and grimaced through warm-ups but ultimately played 34 minutes in Game 2, a team high. He finished with six points and three rebounds.

After the game, Carroll characterized himself as "not 100 percent" but said he "would've gone out there on one leg."

"[Bazemore] is someone we'll consider that has the potential to start," Budenholzer said. "DeMarre and Baze have played together. We sub Baze in for Kyle usually pretty early in the first quarter, so they've played together a fair amount and they'll probably have to play together more, whether it's to start the game or not."

According to ESPN Stats & Information, Korver entered Friday night's game having traveled 2.7 miles per game in the postseason, fourth-most in the NBA. At 34, Korver is the oldest among the top 55 players in miles traveled.

When made aware of the statistics, Korver told ESPN on Friday before Game 3 that playing in perpetual motion is a natural byproduct of his game but said he wouldn't cite fatigue as a factor in his struggles.

The Hawks, who trail the series 2-0, visit the Cavaliers in Cleveland on Sunday night in Game 3.