Kyle Kuzma on latest injury: 'Hard to move around on two flat tires' 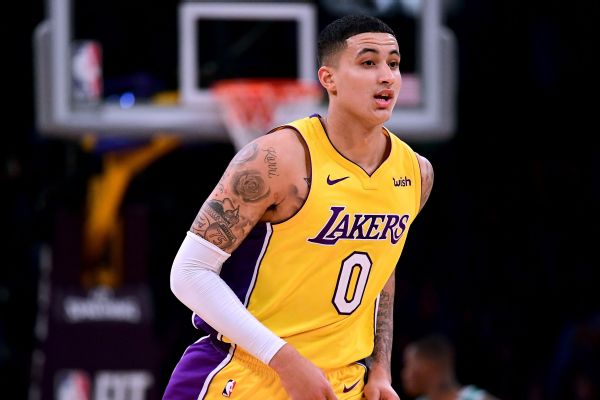 LOS ANGELES -- Los Angeles Lakers forward Kyle Kuzma hobbled out of Staples Center late Friday night with both of his ankles aching and the remainder of his impressive rookie season up in the air.

Already playing through a right ankle injury that he suffered earlier this season, Kuzma was limited to 18 minutes before leaving Friday night's 113-96 loss to the Minnesota Timberwolves midway through the third quarter after he suffered a mild left ankle sprain.

Kuzma underwent X-rays after the game that were negative and the rookie is considered day-to-day.

But Kuzma was uncertain when asked about his status for the remaining three games and what the Lakers (34-45) might do with the rookie with little left to play for.

"I tried to move and push around [on the left ankle in the third quarter], but it is kind of hard to move around on two flat tires," said Kuzma, who suffered the latest ankle injury in the second quarter when he attempted a post move and rolled his ankle. "My body feels great. At the end of the day, it is just my ankles. [But] I can't tell you anything right [about the final three games of the season]."

Kuzma was later asked if the team might contemplate shutting him down this late in the season.

The Lakers are already without Brandon Ingram (concussion protocol), Lonzo Ball (knee contusion) and Isaiah Thomas (hip surgery). Ingram has missed four straight games, and while he is improving, the forward probably will be out Sunday against Utah. Ball has missed the past five games because of his knee injury.

Kuzma, who entered the game averaging 16.3 points and 6.3 rebounds, said his latest ankle injury was different than the one suffered to his right ankle. Kuzma also injured his right ankle last season while in college at Utah, in addition to spraining it this season.

"Just really throbbing," Kuzma said of how his left ankle feels. "[It's] a little different than my last one. My last one was an inside sprain. This is an outside sprain. Two different types of feelings."