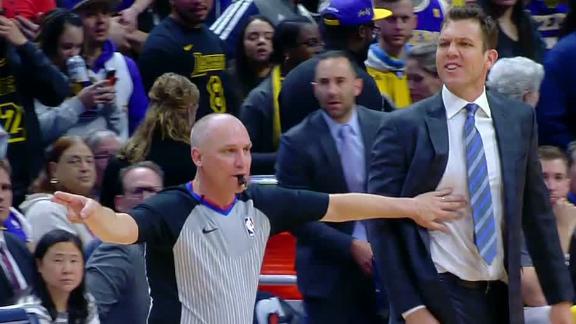 DENVER -- For the second time this season, the Los Angeles Lakers left a loss in Denver upset with Jamal Murray's late-game antics.

Lakers coach Luke Walton said the Nuggetsguard was acting "disrespectful" at the end of Denver's125-116 victoryFriday.

"I felt like for the second time we played here, Murray was being a little disrespectful at the end of the game," said Walton, who would not go into specifics. "Just some trash-talking toward our guys."

When these teams last met in Denver on Dec. 2, Murray went out of his way to dribble upcourt and around Lonzo Ball, who was walking away as the final seconds were ticking off a 115-100 Nuggets win.

"I don't know, I don't really worry about Jamal Murray," Ball said when asked what Murray did at the end of Friday's game. "Like I said, ain't nobody worried about him."

Asked about Murray dribbling around Ball the previous time they played, Ball said the Lakers didn't forget it.

"We remembered it," said Ball, who finished with 15 points, 8 assists and 8 rebounds. "It's a punk move. But like I said, we're not going to get into it. [Murray will] do whatever he's going to do."

Typically, Ball praises opponents. After this game, Ball spoke of the Nuggets point guard in a dismissive manner, the first time he has done anything close to this in his rookie season.

"Like I said, he going to do the circus stuff. I'm not feeding into it," Ball said.

The Lakers and Nuggets face each other again Tuesday at Staples Center, a rematch that Ball said he "can't wait" for.

Murray led the Nuggets with 22 points, 8 assists and 4 steals. He scored eight points in the fourth quarter, six coming on free throws to help the Nuggets outscore the Lakers 18-6 to finish the game.

He said he "was not even looking at [Walton]" and that he "wasn't talking to nobody."

"I just like competing," Murray said. "You know, we are playing for a playoff spot. We just came off two bad losses and we had to go out there and play with a little fire, and I guess the other team took it to heart. But I can't do anything about that but just keep playing my game and accept the challenges.

"I can't control what the other team's gonna feel," Murray added. "I'm just gonna go out there and hoop, and whoever takes it to heart and takes their losses salty, I can't do anything about that."

Walton at one point was yelling toward the Nuggets near the end of the game. He ended up shaking hands and embracing Nuggets coach Mike Malone afterward on the court.

"I'll watch the film," Malone said when told that Walton found Murray to be disrespectful. "I know their bench was very upset with Jamal for whatever reason. I know some of that probably carried over from last time we played them from Jamal and Lonzo. Jamal is a young player who has to continue to mature, but I will watch the film and talk to him about that.

"All I know is Jamal is going to have to compete and play hard and we don't win the game without Jamal Murray. I think it is OK to play with emotion, and some guys thrive in that situation. And Jamal is able to play with emotion, but I never want it to border on the line of being disrespectful to your opponent. If I watch the film and see that, I definitely will talk to Jamal about that."

Thomas acted coyly and would not say what words were exchanged between himself and Murray.

"It is what it is. That's the type of player he is, but we've got another shot at it Tuesday, so looking forward to it," Kuzma said. "Of course, anytime something like that [Murray dribbling around Ball] happens, you're always going to remember it."