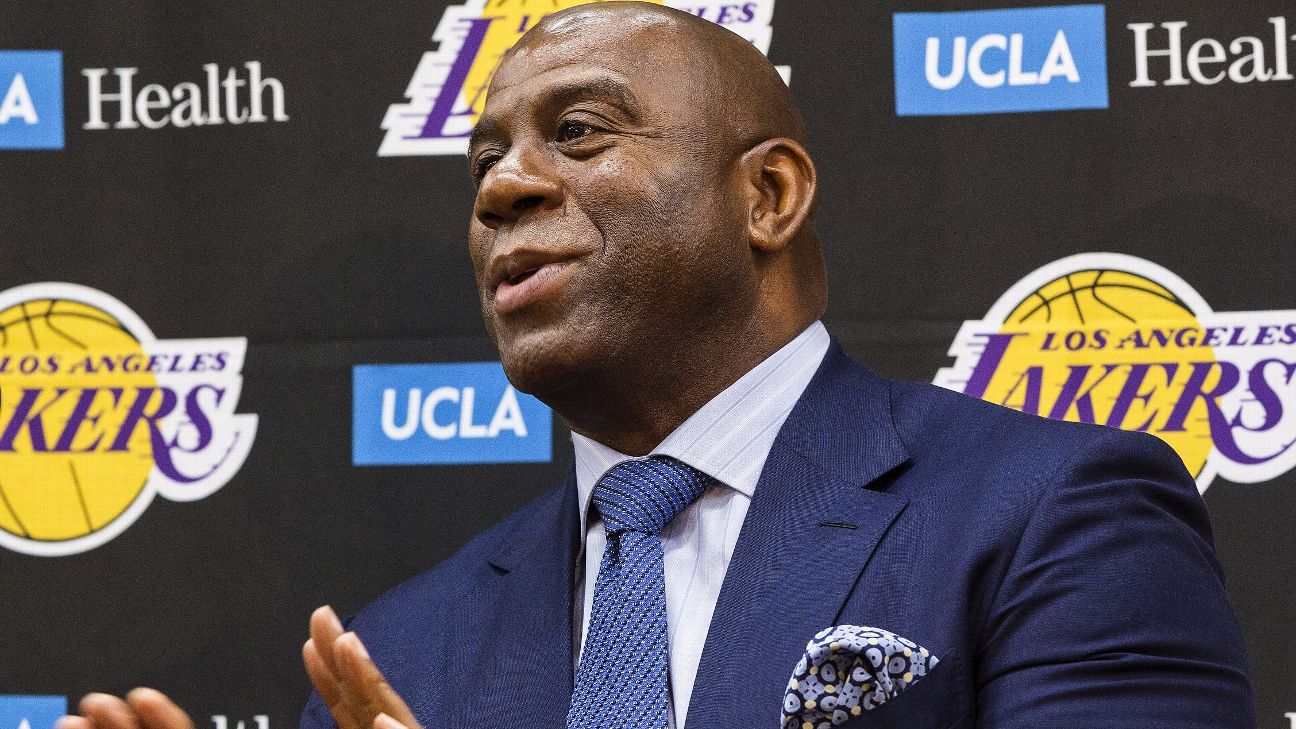 PHILADELPHIA -- Los Angeles Lakers president Magic Johnson said the New Orleans Pelicans operated in bad faith during negotiations with his team over a deal for superstar Anthony Davis. However, he said he isn't dwelling on the trade deadline failure and wants his players to shift their focus forward.

"We knew that basically at the end of the day, what happened, happened," Johnson said before the Lakers' 140-123 loss to the Philadelphia 76ers on Sunday. "And we knew that when we first started, in terms of what happened. But hey, it is what it is."

Johnson was asked whether the New Orleans front office -- run by general manager Dell Demps and executive vice president Mickey Loomis -- acted in good faith from the time Davis' trade request became public until the deadline passed without a deal.

Johnson replied flatly, "No." But he pushed back against the notion that the public nature of the negotiations was unfair to L.A.'s young core, as players heard their names mentioned as trade chips on an almost daily basis.

"Quit making this about thinking these guys are babies because that's what you're treating them like," Johnson said. "They're professionals. All of them. And this is how this league works. They know it, I know it -- that's how it goes.

"So we've got to move forward, and we are moving forward. They played outstanding against Boston. Give them credit. And we want to play well today and continue on. This is a part of the league. You've got a good side of the business that we get paid to be professional basketball players, and there's deals like this."

Johnson also rejected the characterization that the negotiations were different than the way the rest of the league conducts its business.

"All deals are ... a lot of them are made in public," he said. "We didn't make it in public, but that's part of it. That's what happens, man. We've got big boys here, and they bounce back. They're fine."

When asked whether the way things went with New Orleans could have a hangover effect on his franchise this offseason, Johnson remained steadfast in his vision for returning the Lakers to championship form.

"That's not going to change our plans this summer," Johnson said. "It's a great [free-agency] class, and we just want to get one of them."

"We were on the phones early on," Johnson said, admitting that the Lakers have wanted to add shooting to their lineup for quite some time. "Nobody was going to make a move until the last week. And we were locked into Reggie for a long time. Had some great talks with Detroit. And then finally it became a deal. Mike was really last-second when we didn't know that Philly was going to make that move [acquiring Tobias Harris from the Clippers]. When they made that move and we looked up and said, 'Man, a stretch 4-5 could really help us out.' And we feel good about the trade."

Johnson joined the team in Philadelphia on Sunday after attending a reunion with the 1978-79 Michigan State championship team to celebrate the 40th anniversary of its title on Saturday in East Lansing, Michigan. Johnson used the trip to reconnect with his team and re-emphasize the directive for now until April: qualifying for the postseason for the first time since 2013.

"I talked to guys individually," Johnson said. "Because that's important to have sidebars with them. Make sure that we're heading all in the same direction. And we are. And we got a goal ahead of us to try to make the playoffs. That's what it's all about."

There were mixed reactions to Johnson's message in the Lakers' postgame locker room.

"I think he runs the team, and he felt the pulse of the team either throughout the trade deadline or whatever the case may be,"LeBron Jamessaid. "But just having him around whenever that may be is always good for the ballclub."

"I don't know," Rajon Rondo said when asked about Johnson's address. "Everyone's different. Everyone receives information different. It didn't translate to a win. I don't know."

Kyle Kuzma said it was the first time he'd heard from Lakers management from the weeks leading up to the trade deadline or since it passed.

"We just hashed it out," Kuzma said. "I mean, any time Magic Johnson, one of the greatest players in the game, comes to talk to you, you're always going to be all eyes and ears. Optimistic. That's just what Magic is. He's a guy that when he walks into the room, [it] kind of electrifies. It's just who he is. You listen to what he says."

Lakers center JaVale McGee was asked how Johnson's presence made him feel.

"I felt good," McGee said. "How am I supposed to answer that? How did I feel? Tingly inside? I don't know."

The Sixers' trades for Harris, Boban Marjanovic, James Ennis III, Mike Scott and Jonathan Simmons were examples of how "stacked" the Eastern Conference has become, according to Johnson. While openly pondering how the East bracket could play out, Johnson said he is "excited" thinking about his team being part of the postseason.

"I don't want them focused on this other stuff," he said. "What happened, whose name was mentioned, all that -- that's over with. That was Thursday. This is now. Everybody got to buckle up, and we've got to move forward."

With the high-stakes nature of playing in the NBA, let alone playing for the Lakers, an organization that holds itself to a championship standard, Johnson said trade talks will only continue to surround his team.

"Listen, we get paid to do a job," he said. "And we're all professionals. I've been in this league for 40 years. A lot of players got traded on Thursday and Wednesday. Guess what's going to happen next year? A lot of players are going to get traded. A lot of players will stay home. And I talked to our guys, they're in a good place. That's all that matters. We're heading toward, hopefully, getting into the playoffs. And so, that's a part of it -- a part of NFL, a part of NHL, a part of Major League Baseball, a part of the NBA."

Johnson was also asked about Sixers second-year star Ben Simmons, who as a 6-foot-10 point guard has drawn comparisons to the 6-foot-9 Johnson, who won five rings playing point guard for the Lakers.

After the win over the Lakers, Simmons said he isn't focused on speaking to Johnson "right now," but he touched on why that conversation could be beneficial.

"He's been in multiple situations where he's had to play the 5, and he won a championship that way, and just a Hall of Famer, one of those guys who is in the position I'm in ... I think he can help," Simmons said.

When asked about Johnson's comments on Simmons, a team spokesman for the Sixers declined comment to ESPN. 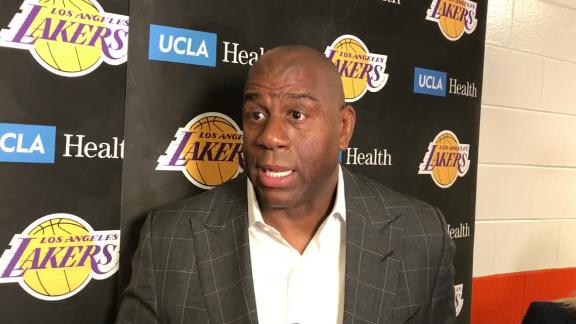