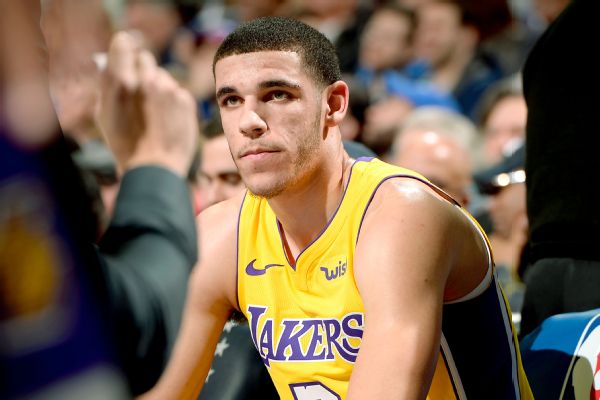 TORONTO -- Rookie point guardLonzo Ball's left knee injury, which sidelined him two weeks ago,is a minor MCL sprain that has a recovery timetable of up to three weeks, the Los Angeles Lakerssaid Saturday.

Ball was hurt in a game against theDallas Maverickson Jan. 13 and has missed six straight games. He has yet to go through a full practice but has recently been shooting, doing some treadmill work and lifting. The sprain limits his lateral movement. Ball has said that he won't play until he can run.

Head coach Luke Walton said Ball will have to go through a full practice before returning to play. The Lakers are currently on a five-game trip that ends in Oklahoma City next Sunday.

"He's feeling better every day," Walton said. "I wouldn't be surprised if within a couple of days, a week, whatever it is, they say he's ready to start practicing again.

"But we are still training and approaching it as if it's long-term. We are not making any plans as if he's coming back tomorrow."

Walton said the team will not rush Ball's return.

"He will be back when he is ready to play," Walton said. "When that is, I can't tell you -- whenever his knee feels good. ... We are not going to rush him back. Once he gets cleared, it will be about getting him back to practice and then seeing how he feels after that."
Report a correction or typo
Related topics:
sportsespnkneemclluke waltonnbasprainlonzo balllos angeles lakers
Copyright © 2022 ESPN Internet Ventures. All rights reserved.
TOP STORIES
Activists call for reward after teen found dead along South LA freeway
Strong SoCal winds topple massive trees, damaging homes and vehicles
Video shows wild street takeover near Fairfax District
Fraudulent COVID testing sites shut down in South Gate, Bell Gardens
Famed Big Bear bald eagle Jackie lays first egg of 2022
Pictures show aftermath of crash involving Arnold Schwarzenegger
Judge OKs California earlier releases for repeat offenders
Show More
Booster shots needed against omicron, CDC studies show
Exclusive interview: VP Harris discusses immigration, voting rights
Regina King's son, musician Ian Alexander Jr., dead at 26
SoCal weather: Strong winds to linger in region Sunday
Rams get fans fired up with giveaways ahead of playoff game
More TOP STORIES News