Lakers say Ball (ankle) out at least another week 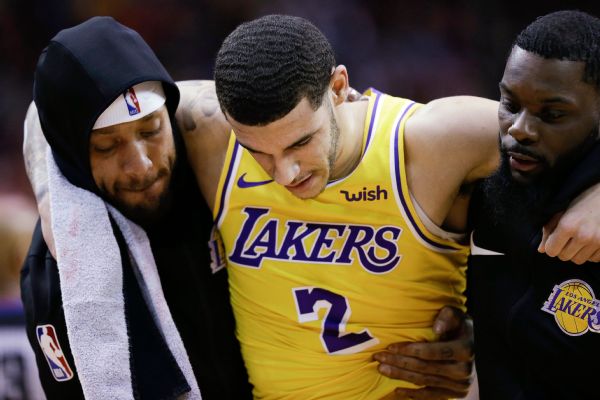 The Los Angeles Lakers say point guard Lonzo Ball will be re-evaluated in a week.

Team physicians on Thursday determined Ball needs more "healing and recovery time" because of a bone bruise related to his Grade 3 ankle sprain suffered Jan. 19. The team says Ball will meet with team physicians in a week and his status will be updated again at that point.

Ball will miss his 15th straight game Friday night against Milwaukee because of the ankle injury. The Lakers will also be without Lance Stephenson, who has been ruled out because of a sprained toe suffered Wednesday against New Orleans.

Ball injured his ankle at Houston and the initial timetable for his recovery given by the team was that the point guard would be expected to miss four to six weeks.

However, Ball's recovery had been slowed by a bone bruise recently. With 21 regular-season games left in the Lakers season, coach Luke Walton could desperately use his starting point guard back, but time is running out considering that Ball would still need time to do basketball activities on court and return to game condition.

The Lakers entered Thursday night three games out of the eighth and final playoff spot in the Western Conference.

After three home games next week, the Lakers embark on a five-game trip through Chicago, Toronto, Detroit, New York and Milwaukee.

"We obviously miss another ball handler, another playmaker," LeBron James said recently. "A guy that's very, very good defensively. With his ability to get a steal and pressure the offensive point guard and then push the pace for us, get into our early offense. So we miss that a lot."