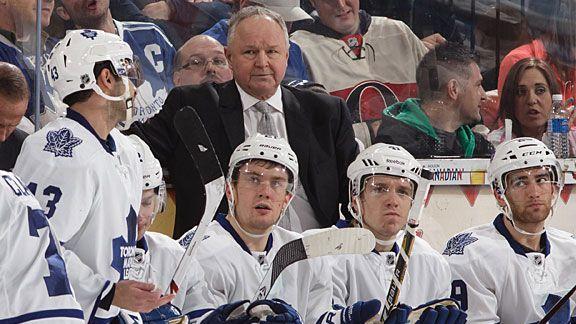 TORONTO -- Randy Carlyle will be back as Maple Leafs coach next season.

General manager Dave Nonis said Thursday he and new team president Brendan Shanahan "decided together that Randy Carlyle was the right person to lead this team."

Carlyle and the Leafs agreed to a two-year contract extension, but assistants Dave Farrish, Greg Cronin and Scott Gordon will not return.

"In Randy, we know that we have a leader who has enjoyed a high level of success as both a player and a coach, including a Stanley Cup championship," Nonis said in a statement. "It was important that the positives Randy brings to our team were not overshadowed by a finish to the season that we all must take responsibility for."

Toronto went 2-12 in its last 14 games this season after climbing as high as second place in the Atlantic Division. Carlyle led the Leafs to the playoffs in the lockout-shortened 2013 season, the club's first postseason appearance since 2004.

"I appreciate the support of Brendan, Dave and the entire organization and am looking forward to working with them to get the Maple Leafs back into the playoffs," said Carlyle, who won the Stanley Cup as Anaheim's coach in 2006-07. "We have a strong foundation here, and everyone wants to get back to work to deliver the results that we know this team is capable of."