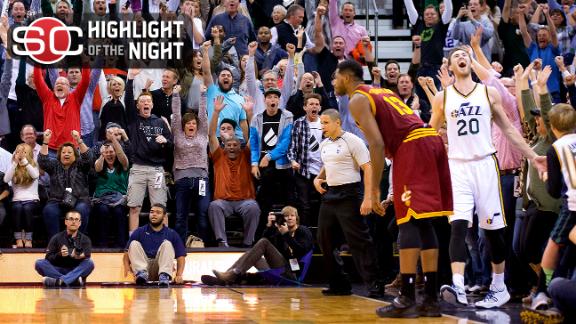 SALT LAKE CITY -- EnergySolutions Arena has become one of LeBron James' most disliked places in the NBA, as he lost to the Utah Jazz in the final five seconds for the fourth time since 2007 on Wednesday night.

Gordon Hayward hit a step-back 20-footer at the buzzer to clinch the Jazz's 102-100 win and drop James' Cleveland Cavaliers to 1-3 on the season. It was the fourth time in the past five seasons James has lost in Utah with the Cavs and Miami Heat.

James said he has been challenged consistently in Utah throughout his career.

"Since I came into the league, one thing they do, they move the ball," James said. "They move bodies, they share the ball and they're going to play hard. It has not changed."

And James has had some fantastic individual performances in Salt Lake City, averaging 31.3 points, 8.3 rebounds and 6.4 assists in 12 career games.

On Wednesday, James scored 31 points and hit a clutch 3-pointer and three vital free throws to tie it in the last minute only to lose again, dropping his career record in Utah to 5-7 with his fourth straight loss here.

He also had four assists -- of six total for the Cavaliers.

James before the game hadacknowledged being "passive" in the Cavs' previous two losses and said it wouldn't help his team in the long run if he simply carried it to victories in the interim. He also said there was more "anger behind the questions" after the Heat's slow start in 2010-11 than what the Cavs are experiencing now.

"We got a little bit of clarity but we still got to -- me, personally -- I still got to figure out ways to get my teammates involved, too," James said. " 'Cause it just can't be a one-, two- or three-man show. We have to do it together."

Among James' other tough losses at Utah:

On Jan. 14, 2010, James led a huge fourth-quarter comeback by scoring 18 of 20 Cavs points and finished the game with 36 points. However, Sundiata Gaines, a rookie who was on a 10-day contract, hit a 3-pointer at the buzzer to beat James 97-96. Gaines had been subbed in to replace Williams, who left with a wrist injury.

On March 3, 2012, Devin Harris scored a three-point play with 4.5 seconds left to give the Jazz a 99-98 lead. James had 35 points, 10 rebounds and six assists in that game, and carried the Heat in the fourth quarter. But on the final possession, he passed the ball to teammate Udonis Haslem, who missed a jumper at the buzzer.

On Jan. 14, 2013, James led a fourth-quarter comeback with teammates Dwyane Wade and Chris Bosh on the bench. With the Heat down 21 points in the fourth quarter, James scored nine of his 32 points as they pulled within two points only for the Jazz to pull away and win by seven points.

In James' first visit to Utah, in January 2004, he scored 29 points in a Cavs overtime victory but sprained his ankle. He went on to miss games for the first time in his career.

"They linger for the rest of the night," James said Wednesday of his disappointments in Utah. "But tomorrow is a new day."

Jazz Stun Cavs At Buzzer
SportsCenter Highlight of the Night: Gordon Hayward hit the game-winning jumper to lift the Jazz over the Cavaliers 102-100.

Trouble In Cleveland
Brian Windhorst breaks down the Cavs' rough start to the season.