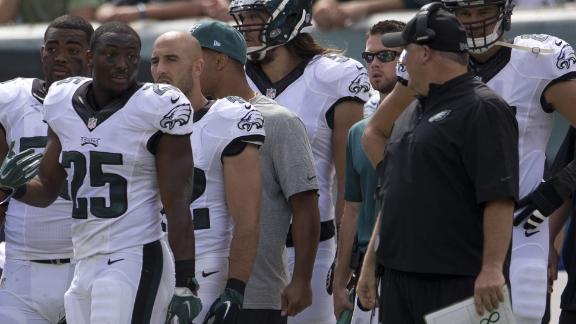 LeSean McCoy has a theory about why he was traded to the Buffalo Bills and why the Philadelphia Eagles' roster has been churned over the offseason -- and it has to do with more than just fiscal responsibility.


"I don't think he likes or respects the stars. I'm being honest," McCoy told The Philadelphia Inquirer on Monday. "I think he likes the fact that it's 'Chip Kelly and the Eagles.'"

Since Kelly has come aboard with the Eagles prior to the 2014 season, the Eagles have cut ties with quarterback Nick Foles, receivers Jeremy Maclin and DeSean Jacksonand linemen Todd Herremans and Trent Cole.


"It was 'DeSean Jackson -- a high-flying, take-off-the-top-of-the-defense receiver.' Or 'the quick, elusive LeSean McCoy,'" McCoy told the Inquirer. "I don't think [Kelly] likes that."


McCoy told the Inquirer that he didn't buy Kelly's reasoning for the trade as being purely financial, and he pointed at comments made by Eagles owner Jeffrey Lurie, who said during the owners meetings in March that Kelly preferred DeMarco Murray's style to McCoy's.


"There's nothing wrong with that," McCoy told the Inquirer. "Chip felt like I wasn't a fit for his offense. But why not say that?"


The 26-year-old McCoy, who told the Inquirer that he has no bad feelings toward Kelly, acknowledged that the coach has tried to call him twice, but he didn't answer.


"He's not the bad dude everybody makes him out to be," McCoy said of Kelly. "He's just different. But I don't really have any hate for him. I really don't. In the beginning I did, but I don't. If I see him, I'll speak to him, respectfully -- 'How are you doing, coach? Good luck.'"


McCoy, who has a five-year, $40 million deal with the Bills, has the NFL's third most rushing yards (6,792) and fourth most rushing touchdowns (44) since the Eagles drafted him in the second round in 2009. He finished last season with 1,319 rushing yards, third most in the NFL.