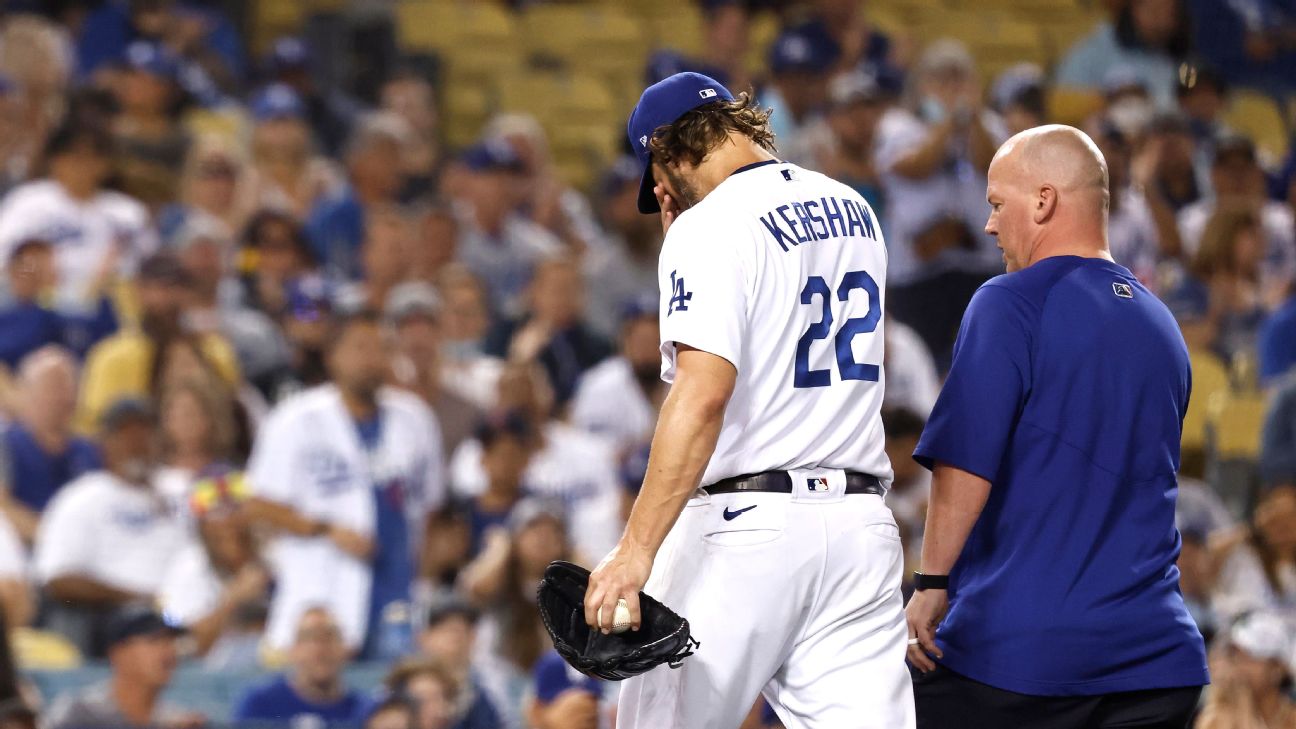 Los Angeles Dodgers manager Dave Roberts saw Clayton Kershaw occasionally wince as he navigated through the Milwaukee Brewers' lineup on Friday night and thought -- hoped -- he was merely upset at not getting some strike calls. It turned out to be far more serious -- a recurrence of the forearm/elbow inflammation that kept Kershaw out for an extended period earlier this season, forcing an abrupt exit in the top of the second inning.

With the playoffs approaching, Kershaw's season is seemingly over. With his contract expiring, it's fair to wonder if Kershaw's illustrious Dodgers career is over as well.


Kershaw, still in uniform moments after the Dodgers' 8-6 comeback victory, called it "a tough blow."

"It just got bad enough to where I couldn't keep going tonight," Kershaw said. "I'll get it looked at again, obviously, in the next couple days. Haven't quite wrapped my head around all that yet. The biggest thing was I just wanted to be part of this team going through October. This team is special. You saw tonight. ... I've known that. I know that we're gonna do something special this year, and I wanted to be a part of that. That's the hardest part for me right now is just knowing that chances are it's not looking great for October right now."

On Saturday, the Dodgers placed Kershaw on the 10-day injured list with left forearm discomfort.

Kershaw, 33, spent 10 prior weeks rehabbing from inflammation around his pitching elbow, an ailment that began just before the All-Star break. He admittedly tried to return too quickly at the onset, forcing him to restart the rehab process methodically. Throughout, as the team rallied behind the acquisition of Max Scherzer, Kershaw expressed eagerness to contribute to a team on the precipice of greatness.

His initial three starts were generally promising, consisting of a 3.29 ERA, 16 strikeouts and only two walks in 13 innings. But Kershaw struggled against the Brewers in what was supposed to be his final tuneup start before the postseason. He recorded as many outs as he allowed hits (five), was charged with three earned runs and allowed five batted balls that traveled faster than 95 mph.

Roberts came out to check on him alongside a trainer with one on and one out in the second, then led him off the mound after a brief conversation, igniting a standing ovation from the 51,388 people in attendance.


"It was difficult," Roberts said. "It was his last home start this year. You just don't know what the future is gonna predict. I wanted it to be really special for him and his family, and it just didn't end the way we had hoped. But with that said, we have to gather more information and see what's next."

Kershaw held the baseball in his hand as he walked toward the Dodgers' third-base dugout, providing the impression that he was keeping a memento to commemorate what could be his final start in a Dodgers uniform.

He laughed off that notion.

"Probably just shock," he said. "I honestly had no idea I was holding on to the ball."

The Dodgers' victory kept alive their hope of winning a ninth consecutive National League West title, but just barely. With two regular-season games left, they're two games behind the San Francisco Giants, who have won 22 of 28 games since the start of September.

The Giants (106-54) can wrap up the division with a win over the San Diego Padres on Saturday afternoon, before the Dodgers even take the field for their penultimate game of the regular season. The Dodgers (104-56) need to win their two remaining games and for the Giants to lose their two remaining games just to force a tiebreaker game from Oracle Park in San Francisco on Monday.


More likely, the Dodgers will host the St. Louis Cardinals in the NL Wild Card Game on Wednesday, with Scherzer set to face Adam Wainwright. If they advance, Walker Buehler and Julio Urias can be lined up to pitch the first two games of the NL Division Series against the Giants.

The COVID-19-shortened season saw Kershaw experience something of a resurgence. His fastball velocity ticked back up, to an average of nearly 92 mph, and he rode a 2.16 ERA in 58 innings into October. The Dodgers spent most of that postseason in a makeshift bubble in Arlington, Texas, playing near Kershaw's hometown, where several of his closest friends and family members saw him win the championship that had famously eluded him his entire career.

The next chapter is uncertain.

"My future's gonna take care of itself," Kershaw said. "I'm not really worried about that right now. I really wanted to be a part of the moment right now, and I wanted to be with this group going through October. That was my only focus this year. Once I got hurt, it was just to come back and make it up for this month. That's the hard part right now is knowing it's gonna be a challenge to even contribute at all this next month. But as far as anything else goes -- I haven't wrapped my head around it, and I don't plan to any time soon. I'm just excited to watch these guys next month." 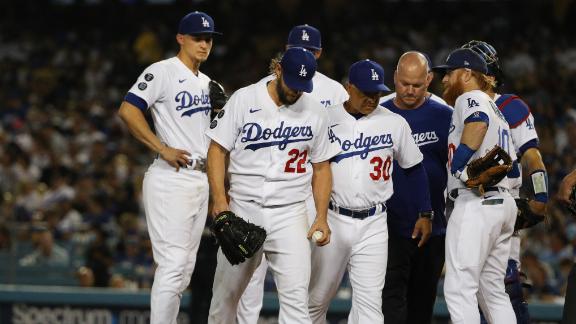