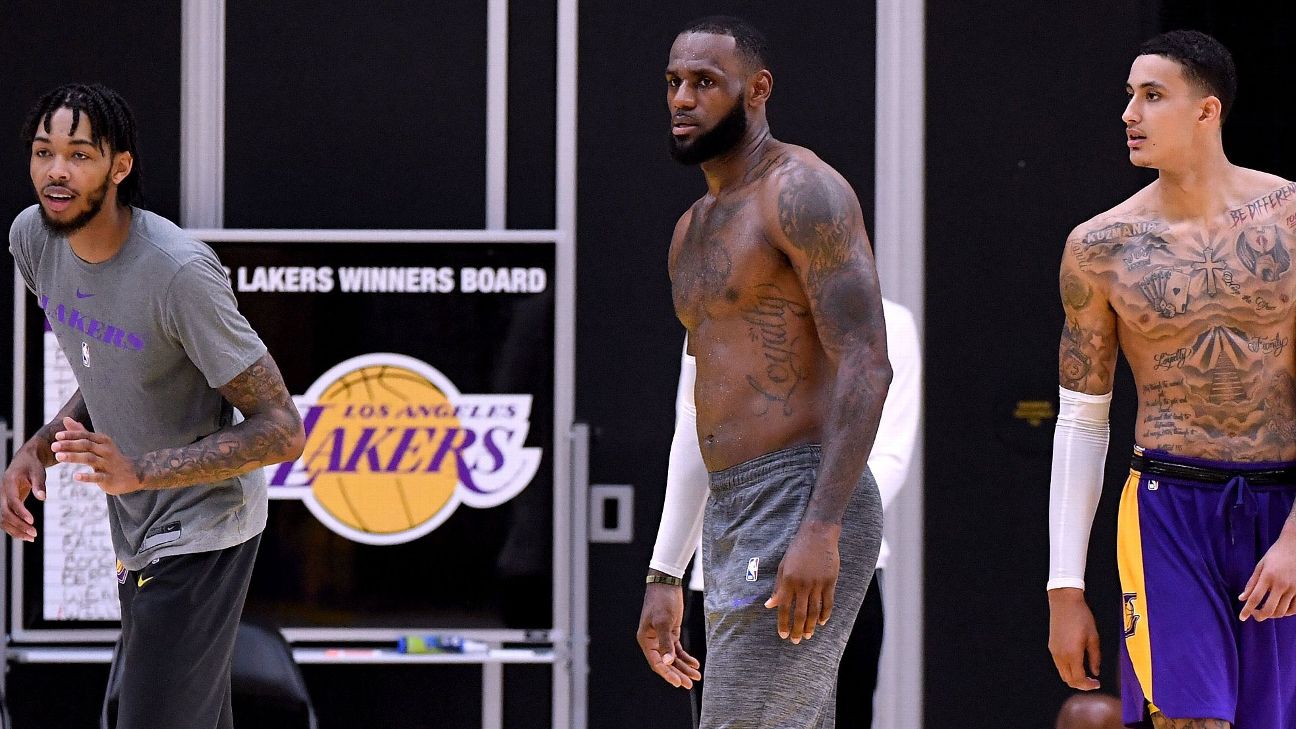 EL SEGUNDO, Calif. -- Luke Walton is still installing and implementing his playbook. But the Los Angeles Lakers coach knows who he will be drawing up the majority of plays for at the end of games.

For the first time since Kobe Bryant retired in 2016, the Lakers have a superstar to throw the ball to during close games in LeBron James.

"When you get to the end of a game, that is what max players make max money for, that is what they do," Walton said after the Lakers' second day of practice with James. "I can comfortably say that LeBron will be our first option at the end of ballgames if it's close."

Since Bryant's retirement, the Lakers have exactly one game-winning buzzer-beater, courtesy of D'Angelo Russell against theMinnesota Timberwolveson April 9, 2017, according to ESPN Stats and Information research.

Last season, the Lakers wanted to give opportunities to close out a tight game to the likes of Brandon Ingram, Kyle Kuzma, Lonzo Ball and Julius Randle. Kentavious Caldwell-Pope and Isaiah Thomas also were options, at times.

Walton wanted to develop young prospects such as Ingram, Kuzma, Ball and Josh Hart, and the coach gave them opportunities in the clutch to experience end-of-game situations.

There's still the possibility that Walton will put the ball in James' hands at the end of games and the team-first star could get creative and find one of his young teammates and put that player in a game-winning opportunity to see how he responds.

But at least Walton knows he has James when the Lakers absolutely need a basket. The Lakers star came up big twice last postseason alone.

The forward hit a running, buzzer-beating bank shot from the left side of the basket in Game 3 of the Eastern Conference semifinals to deflate the Raptors, before hisCleveland Cavalierseventually swept Toronto. And in Game 5 against theIndiana Pacersin the first round, James buried a 3-pointer at the buzzer while fading to his left near the top of the key.

Over his career, James is 44-for-144 (30.6 percent) in go-ahead/game-tying shot situations in the final 24 seconds of a fourth quarter or overtime in the regular season and the playoffs. With five seconds or less in such circumstances, he is 18-for-86 (20.9 percent), with a career-high three buzzer-beaters coming last season and postseason.

"It will be very nice to have LeBron at the end of ballgames," Walton said. "But it is good for Brandon and these guys to get these opportunities the past couple of years and taking big shots and making or missing.

"It is the old famous [Michael] Jordan question, right? All the shots he missed is what has made him so great and made him work harder. Now, we have one of the best closers in the game, but we also have guys who have been in that situation over the last couple of years."

Meanwhile, James will be using camp to learn the tendencies of his new teammates and where they like to receive the ball when he will be passing to them.

"That's my job to, I know how guys like the ball," James said. "I watch a lot of film and know if guys like seams or no seams. They like low passes or high passes. They like the numbers or the forehead. It's my job to get it to them. I think our coaching staff and Luke will put them in positions where they need to be on the floor. It's my job to get it to them."
Report a correction or typo
Related topics:
sportsespnclutch timeluke waltonnbacloserlos angeles lakerslebron james
Copyright © 2022 ESPN Internet Ventures. All rights reserved.
TOP STORIES
20-year-old killed in San Bernardino shooting remembered as 'good kid'
Eyewitness Newsmakers: Paying for college amid rising costs
78,000 pounds of infant formula arrives in US
COVID-19, shootings: Is mass death now tolerated in America?
24-hour closure planned on 101 Freeway east of downtown LA
Snorkeler finds $2,000 dentures in Gulf - reunites with owner
ABC7's Dallas Raines honored at 72nd annual Golden Mike Awards
Show More
Fate of 2,500 Ukrainian POWs from steel plant stirs concern
Biden pushes economic, security aims as he ends South Korea visit
'Absolutely terrified' teen boy dies hours after 'sextortion' scam
Florida deputy facing negligence charges after fiery takedown
Boyle Heights school inspires 1st-gen Latino students with Career Day
More TOP STORIES News