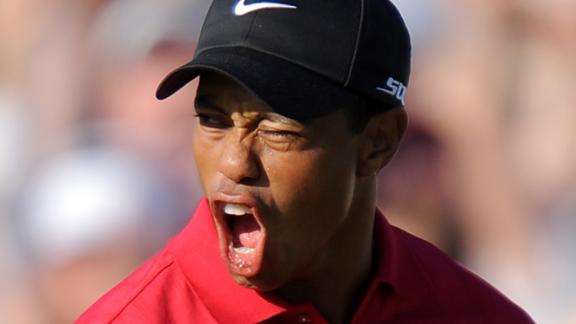 AUGUSTA, Ga. -- A majority of touring professionals surveyed anonymously by ESPN.combelieve that Tiger Woods will win another major championship, but it was nearly 50-50 among those questioned after Woods shot 82 and missed the cut in Phoenix in his first start of the year.

Sixty-four of 103 pros said Woods would win a 15th major title. Interestingly, before Woods played in his first tournament of the year, 25 of 27 said he would win a major. After Woods' first start, 39 of the remaining 76 players said he would win another major, with 36 saying no and one abstaining.


A healthy number of those same players think 25-year-old Rory McIlroy will fail to win a third consecutive major championship and complete the Grand Slam at this week's Masters tournament.


Of the 103 players surveyed, 21 of whom were major champions, only 28 believed McIlroy would win this week at Augusta National, with 72 saying no and three abstaining.


Players were surveyed by ESPN.com between January, at the Humana Challenge, and through the Arnold Palmer Invitational in March.


Woods, 39, missed the Masters last year due to back surgery and hasn't won a green jacket since 2005. The last of his 14 major wins came at the 2008 U.S. Open, and his last tour victory came at the 2013 WGC-Bridgestone Invitational.


An overwhelming number (94 to 9) said they would play a PGA Tour event at Augusta National if it were not home to a major championship.


Defending Masters champion Bubba Watson received the most votes (23) to a question about whom a player would not help if in a fight in a parking lot.


Players were also asked whether the PGA Tour should disclose fines and suspensions; who should get slow-play penalties; whether players should receive a stipend for missing the cut; what players' bucket-list golf course would be; whom they would go car shopping with; whether the PGA Tour should stop testing for marijuana, what their most expensive purchase outside of a home has been; and whether they fly private or commercial.


Of the 103 players surveyed, 63 were American, and 20 countries were represented.