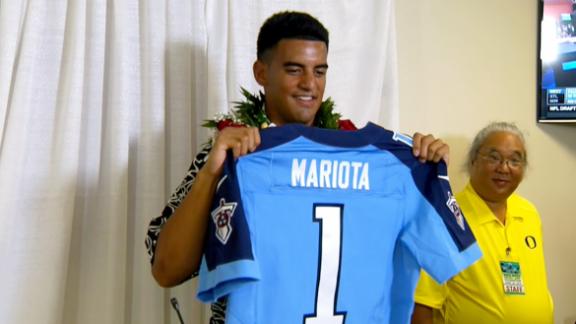 Mariota attended the game less than two days after being selected by the Tennessee Titans with the No. 2 overall pick in the NFL draft.

Oregon played a video tribute to Mariota during halftime at Autzen Stadium, and the crowd of over 35,000 saluted the former Ducks quarterback with a raucous ovation that lasted several minutes.

"That was cool, that was really cool," Oregon coach Mark Helfrich told reporters. "A couple weeks before the draft, he was jacked that he could be here for the spring game. It just pays tribute to both him and this program, this community, the fans that [attending the spring game] was his main goal. ... That was very him."

Mariota watched the game from the sideline and even offered some pointers toJeff Lockie, who is competing for the starting job as Mariota's replacement under center next season.

"[Mariota] said that first ball was too short," Lockie joked with reporters. "I told him it was cold. He was just giving me a hard time about that first throw. But he was pretty supportive, and he was happy with the job I did. And he was proud."

Mariota traveled from his Hawaii home on Friday to Nashville, where he was introduced by the Titans at a news conference. He plans to return to Tennessee on May 11 for the start of the Titans' rookie minicamp.