Maria Sharapova overcomes errors, into 2nd round at French 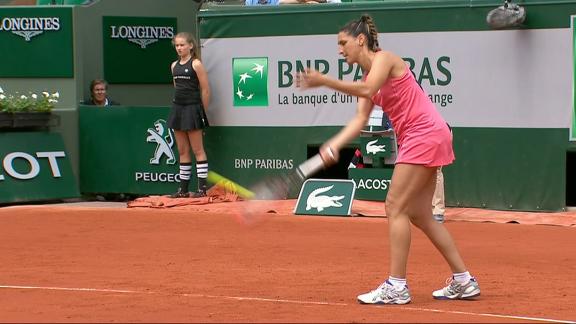 PARIS --Maria Sharapova was unfazed by the boos she heard when leaving the center court of Roland Garros on Monday without treating the crowd to a post-match interview. After all, she had good reasons to rush to the locker room.

Battling a cold that her coughing at times during the match, the defending champion was not in the mood for small talk after beating Kaia Kanepi 6-2, 6-4 in the first round, having been made to work harder than the scoreline suggested.

"Of course I totally understand, everyone usually does post-interviews and answers a few questions to the crowd," said Sharapova. "It's absolutely normal. I'm not making any excuses, but I've got to do what I have to do."

The second-seeded Sharapova, who completed a career Grand Slam in Paris when she first won the title in 2012, is trying to become the first woman to successfully defend her crown at the clay-court tournament since Justine Henin in 2007.

"I got sick a week before the tournament, not right before," she said. "So I guess it's a little bit better timing. But it's just the way it is. I'm getting over it, and hopefully it will pass by soon."

Sporting an elegant striped long-sleeved shirt, Sharapova made 21 unforced errors and dropped her serve once in each set as Kanepi responded to her forehand attacks with powerful groundstrokes. The gritty Estonian saved a match point in the final game, before a double-fault gave Sharapova the win.

"I had a tough opponent ahead of me," Sharapova said. "Overall I'm just happy I got through and have a day off tomorrow, and I should be better by then."

Sharapova improved to 21-1 over the last four years at the French Open, and she has won 44 of her last 45 first-round matches during Grand Slam events. She will face fellow Russian Vitalia Diatchenko for the first time in the second round.

Venus Williams, at 34 the oldest player in the women's draw, was ousted in the first round for the second time in three years. She lost 7-6 (5), 6-1 to Sloane Stephens.

Former No. 2 and 2012 Wimbledon finalist Agnieszka Radwanska lost in the first round for the first time since her 2007 debut at the clay-court Grand Slam, bowing out 6-2, 3-6, 6-1 against Annika Beck.

"Maybe I'm getting older," said the 26-year-old Radwanska. "I just want to forget about that and focus on grass."

Eighth-seeded Carla Suarez Navarro, who looms as a potentially tricky quarterfinal opponent for Sharapovaif they both get that far, eased into the second round with a quick 6-2, 6-2 victory against 67th-rankedMonica NiculescuofRomania.

"I'm much more confident indeed compared to last year," said Suarez Navarro, who lost in the last-eight last year. "One of the big differences between this year versus last year is mentally. I know what I'm doing."

Suarez Navarro was a quarterfinalist both last year and in her French Open debut in 2008.

The 26th-seeded Stosur is returning to form after reuniting last month with former coach David Taylor. After winning only eight matches in 2015, she decided last week to play in Strasbourg, where she claimed her first title this year.

Cornet earned her first victory in five attempts at the French Open, delighting the partisan home crowd on center court.

After the first set, "I told myself, 'Ooh la la. I'm going to fail yet again,'" Cornet said. "A super victory for me."

Meanwhile,Sabine Lisicki, the runner-up at Wimbledon in 2013, made a strong start at the only major where she has never reached at least the fourth round.

Lisicki, seeded 20th, barely worked up a sweat in a 6-3, 6-2 victory against 86th-ranked Monica Puig. She closed out the 66-minute match with an ace.